Some Residents Concerned About Huge New Development Planned for Mississauga

As Mississauga grows, so must its housing options.

Even if some people are likely to grumble about a new condo taking shape in an area that could certainly benefit from additional residential properties.

A brand new development has been proposed for 1375 Lakeshore Road East, near the Dixie and Lakeshore Rd. intersection.

The building, proposed by VanDyk Group of Companies, was initially said to consist of a four to 12-storey condo building with 397 units and ground-floor commercial units that will Lakeshore Rd. E. The proposal includes underground parking and has vehicular access points on Dixie Road and St. James Avenue.

Thank you for attending the 1375 Lakeshore Road (first) Community meeting. Great questions, we are certainly an engaged community!
Further information on this development will be added to our website https://t.co/zynjofJOWP pic.twitter.com/070D3aXYnG

At a recent community meeting regarding the proposal, signage indicated that the company is planning a mixed-use development with eight and 12-storey towers and 12 urban townhomes. The signage also says the building will feature commercial space and a raised outdoor central courtyard space.

Van Dyk is proposing to amend the mixed use and greenlands designation in effect in the area to reflect the additional height they’re requesting.

You can see a rendering below: 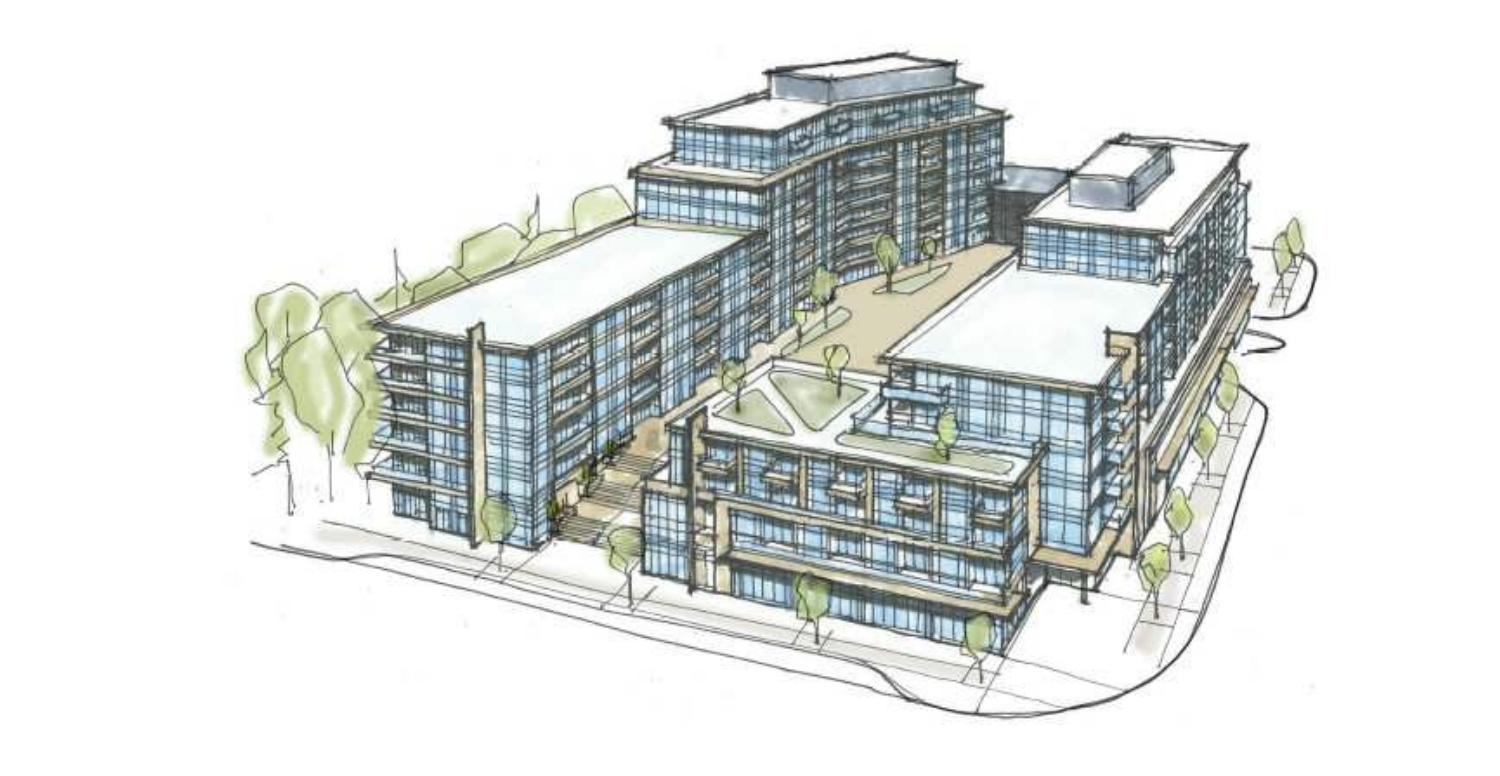 The proposed residential development will actually take shape in an area that could use more living spaces—the Lakeview neighbourhood. While enormous and exciting plans are in store for the former Ontario Power Generation lands, there’s actually not much in the way of residential units in the Lakeshore and Dixie Rd. area.

Before this, the land was home to the former Sheridan Ford car dealership. Now, the building is vacant.

As for what else is in the neighbourhood, the site is close to a number of detached bungalow houses, the Lakeview Golf Course, the Dixielake Plaza and the newly rejuvenated Small Arms Inspection Building. As far as transit goes, the area is currently serviced by MiWay transit Routes 23 - Lakeshore and 5 - Dixie, with both routes terminating approximately one kilometre east of the site in the Toronto boundary at the Long Branch GO Station.

The routes also provide service to the Dixie GO Station.

The area is also home to the Green Acres motel and Applewood Creek.

You can see an aerial image of the area below:

The city says that while the zoning changes being requested are under review, the proposed development is generally in line with the province’s Growth Plan for the Golden Horseshoe and the Regional of Peel Official Plan (ROP). 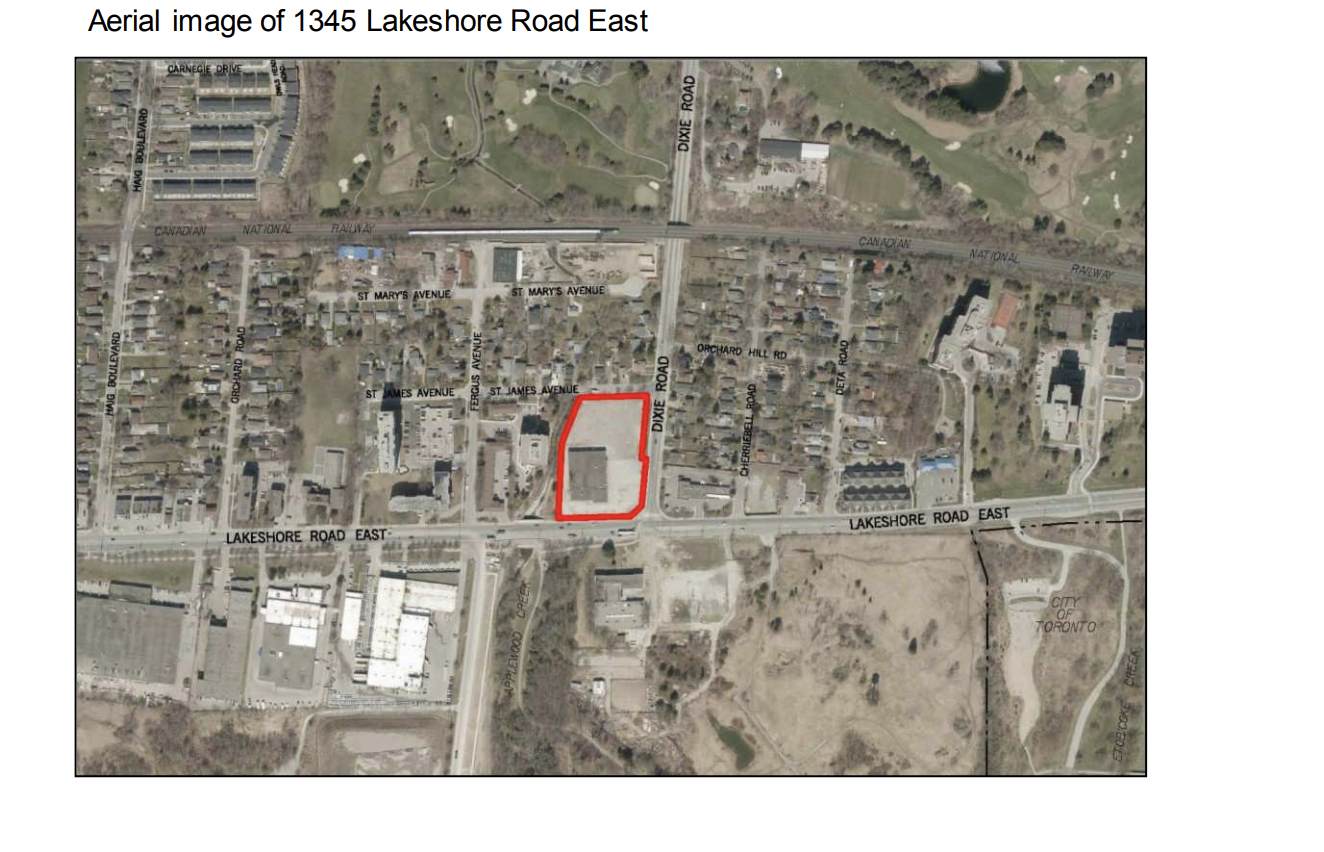 The city says staff will make a recommendation on this project after the public meeting has been held and the issues, including the refinement of the access from Dixie Road and St. James Avenue and the delineation of the hazard lands associated with Applewood Creek, have been resolved.

In a recent Planning and Development Committee agenda, the city offers some interesting information about the site. Since it’s within a neighbourhood that is undergoing transition and growth (in fact, marketing materials refer to it as the Gateway to Lakeview Village), it’s interesting to look at both the history and future of the site.

With the neighbourhood slated to grow exponentially over the coming years, it’s good to start densifying the area early.

Naturally, some concerns have been raised on social media and to the city directly. On social media, some residents—many are in favour of the development and agree that a residential building would be ideal for the relatively low-traffic area—believe the development will create congestion.

Others say condo and apartment developments increase crime, which is an unfortunate (but not terribly uncommon) argument raised whenever mid and high-rise developments are proposed.

In the PDC document, the city says some residents have argued that the development will impact parking supply within the surrounding area and in particular on St. James Avenue.

The city says that some residents have said the addition of 397 units will negatively impact the neighbourhood.

But while reactions have been mixed—and again, some have praised the development and argued that it won’t have any negative impact on the community—the fact remains that the city is actively tackling ambitious development projects that involve the construction of mid and high-rise buildings. With detached houses costing buyers close to $1 million, condos are the last bastion of affordable housing and it’s wise for the city to welcome them.

This condo could be the start of the expected revitalization of the Lakeview neighbourhood.

Here’s hoping it proceeds as planned.

5 unbuilt projects that could have changed...
Top 5 Chicken on the Rocks in Mississauga
Five fun things to do this weekend that are...
Top 5 chicken sandwiches in Mississauga
5 fun ways to make the most out of your...
END_OF_DOCUMENT_TOKEN_TO_BE_REPLACED