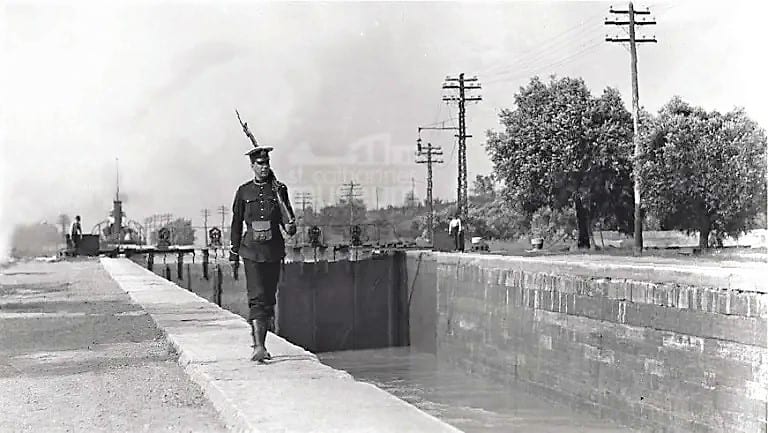 How dangerous could marching up and down the Welland Canal to stand guard over it during WWI actually be?

After all, Welland, St. Catharines and Port Colborne – the three municipalities the canal runs through – are pretty far removed from the European fronts.

According to the St. Catharines Museum and Welland Canals Centre’s “Stories from the Front” blog, it was a lot more dangerous than you’d think.

The troops that protected the property, dubbed the “Welland Canal Force,” never had a single gun aimed at them and yet more than 30 of them died.

The post noted that illnesses like pneumonia took the lives of some of the men “but the biggest culprits were drowning or related injuries. Fourteen of the thirty casualties were ascribed to drowning.”

One St. Catharines soldier was specifically mentioned – Private Thornton Wallace Dunn. “Private Dunn fell into a lock while on duty. A life ring was thrown down to him, but he was unable to maintain a hold on it. Thornton drowned at the age of 21 in April of 1917.”

So why exactly was the Welland Canal being guarded at all? As mentioned above, it’s thousands of kilometres away from the frontline.

Canada declared war on Germany in 1914 (the United States were still neutral), “the 19th Lincoln Regiment and the 44th Lincoln and Welland Regiment were placed on active duty. The men from these regiments were charged with protecting potential targets in Niagara including the hydroelectric sites, bridges, railways and the canal.”

So was the canal really at risk? Very much so, it would seem. Due to Niagara Falls, the only shipping route through the Great Lakes from one end to the other depended on the canal that connected Lake Erie to Lake Ontario and the St. Lawrence River.

Shipping was, of course, a necessity for getting munitions, food and other items to the soldiers fighting overseas in Europe.

Thus the Welland Canal became a German target. The post notes, “There were known plans by the Germans to sabotage the Canal to prevent materials getting from Canada to Europe.”

The most notable plan to destroy the canal has become known as the Von Papen conspiracy. “(German agent Franz) Von Papen served as a military attaché, in the then-neutral United States. He was based out of New York City. Von Papen sent his agent Paul Koeing to determine the best way to destroy the Welland Canal.”

Koeing came to St. Catharines and took rooms at the now-burned-down Welland House Hotel. “He spent time surveying the canal from Port Colborne all the way to Port Dalhousie. His mission was to return and let German agents know where to plant explosives that would do the most debilitating damage to the canal.”

The enemy agents that were to plant the explosives were meant to pose as a tree removal service when crossing the border.

However, the post added, “When the team arrived, they saw how well protected the Welland Canal was and they decided to forgo their plan. Had this plan succeeded, it is unlikely that the canal would have been repaired swiftly.”

However, since it never happened, how do we know about the plan to destroy the canal?

It turns out Koeing was on his way back to Germany after this plot failed when his ship was diverted to England and he revealed the plan under questioning.

As for the mastermind Von Papen? He returned to Germany where he subsequently rose to the role of Chancellor in the 1930s and Vice Chancellor when Adolf Hitler he came to power.