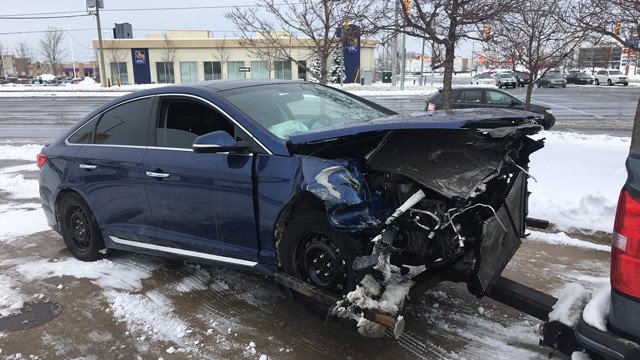 Although snow is normal in Canada, winter storms are almost always accompanied by a slew of traffic accidents and this past weekend was no different.

According to Ontario Provincial Police (OPP) Sgt. Kerry Schmidt, there were over 400 accidents in the GTA on Sunday, Feb. 12.

While collisions are common in bad weather, Sgt. Schmidt added that each and every one of the crashes was preventable and likely due to inappropriate speed.

Although 400 sounds like a shocking number–and it is–we should all do well to remember that we as a region (despite being Canadian) have a generally bad winter driving record.
Does anyone remember the crazy 40 car pileup on the 410 in Mississauga? That late December dust-up only ended in minor injuries for drivers and passengers (which is incredibly fortunate given the magnitude of the incident), but the property damage it caused was extensive, to say the least.

The OPP have responded to over 300 collisions already today, there are over 60 crashes ongoing right now. #SlowDown pic.twitter.com/75fwjb7Pwb

Since we still have a few weeks of winter to look forward to, it’s probably best to take the Sergeant’s sage advice and slow down. It might also be good to consider switching to winter tires, if you haven’t already.

It might also help to, when possible, take an impromptu snow day (although that might be easier said than done.

Stay safe on wintery roads, everyone!