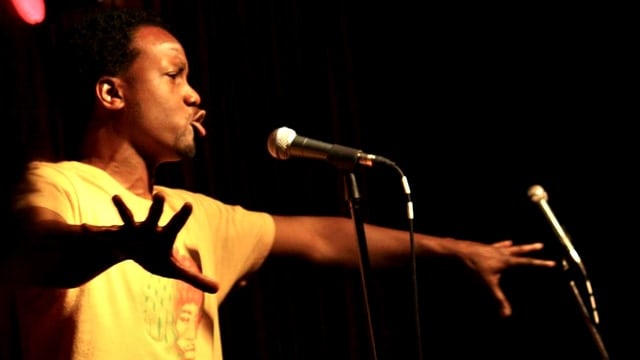 The fourth Mississauga Poetry Slam has a new location and will be taking place at Naughty Nadz this Tuesday, Feb 28th at 8pm. The evening will feature Poet Greg “Ritallin” Frankson.

If you have never been to a spoken word event and were wondering what you should expect at a poetry slam, then you are probably not alone. I was that person last month – going to my first slam and really my first spoken word event.

Quick Wikipedia Definition of Spoken Word:
“Spoken word is a form of poetry that often uses alliterated prose or verse and occasionally uses metered verse to express social commentary. Traditionally it is in the first person, is from the poet’s point of view and is themed in current events.”

As I walked into last month’s slam, I had no idea what to expect. I started talking to people around me and there were UTM students, recent college and university graduates, and even business professionals, and I was pleasantly surprised to see the diversity of people in the audience. There were about 100 people in the audience on that snowy night.

The night is set up to start at 8pm, and there are a few open mic spots for people  to just have fun and recite their poetry. No judging here. This is usually recommended for newbies to test out some material and get the butterflies out.  Then, the Slam begins. It’s set up into 2 rounds.  Judging responsibilities are given to some people in the crowd. The judging is out of 10. Anyone can be part of the Slam, but sign ups are at 7pm. In the first round, everyone that signed up gets a chance to hop on stage to be judged. No worries, everyone is full of encouragement, no haters in the house here.

In between the two slam rounds the feature poet gets on stage and it was Matt “Lip Balm” Miller last month.

After the first round, the top 7 that scored the highest move on to the second round. The slammers will have to come up with new material to perform in the 2nd round. After the 2nd round is completed, the performers are judged just like the previous round, and the top 5 end up with points. First place gets 5 points and $100, while fifth place gets one point. Points are accumulated over the next few slams and the top 4 point-getters have the opportunity to head to Saskatoon to represent Mississauga for the first time ever at the Canadian Festival of Spoken Word.

As the night progressed, I began to realize how much I enjoyed Spoken Word.  This poetry comes from deep within the performer and usually pertains to real-life issues. You can really hear the passion and the truth that comes out. You will hear poetry that will range from being thought-provoking to political to straight out funny.

As a spectator, I really enjoyed the evening and had an awesome time and I encourage all to try something a little different than going to a movie on a Tuesday night. Trust me, it will be a lot cheaper as it is free, and you will not be disappointed in the plot.

This month’s featured Poet will be Ritallin.

Greg Frankson a.k.a. Ritallin is one of Canada’s most respected spoken word organizers, an accomplished performer and an experienced arts educator based in Toronto. He is a past National Director of Spoken Word Canada and a (co-) founder of Capital Slam, the Ottawa Youth Poetry Slam, Bill Brown’s 1-2-3 Slam and YorkSlam. Ritallin was a finalist in the 2011 national team slam championships in Toronto as a member of Kingston Pen. Greg is the Poet Laureate of the International Initiative for Mental Health Leadership and a passionate youth ally, social justice activist and mental health advocate. Through his company Cytopoetics, Greg works full-time in schools, businesses and with community organizations as a presenter, facilitator, speaker and consultant.