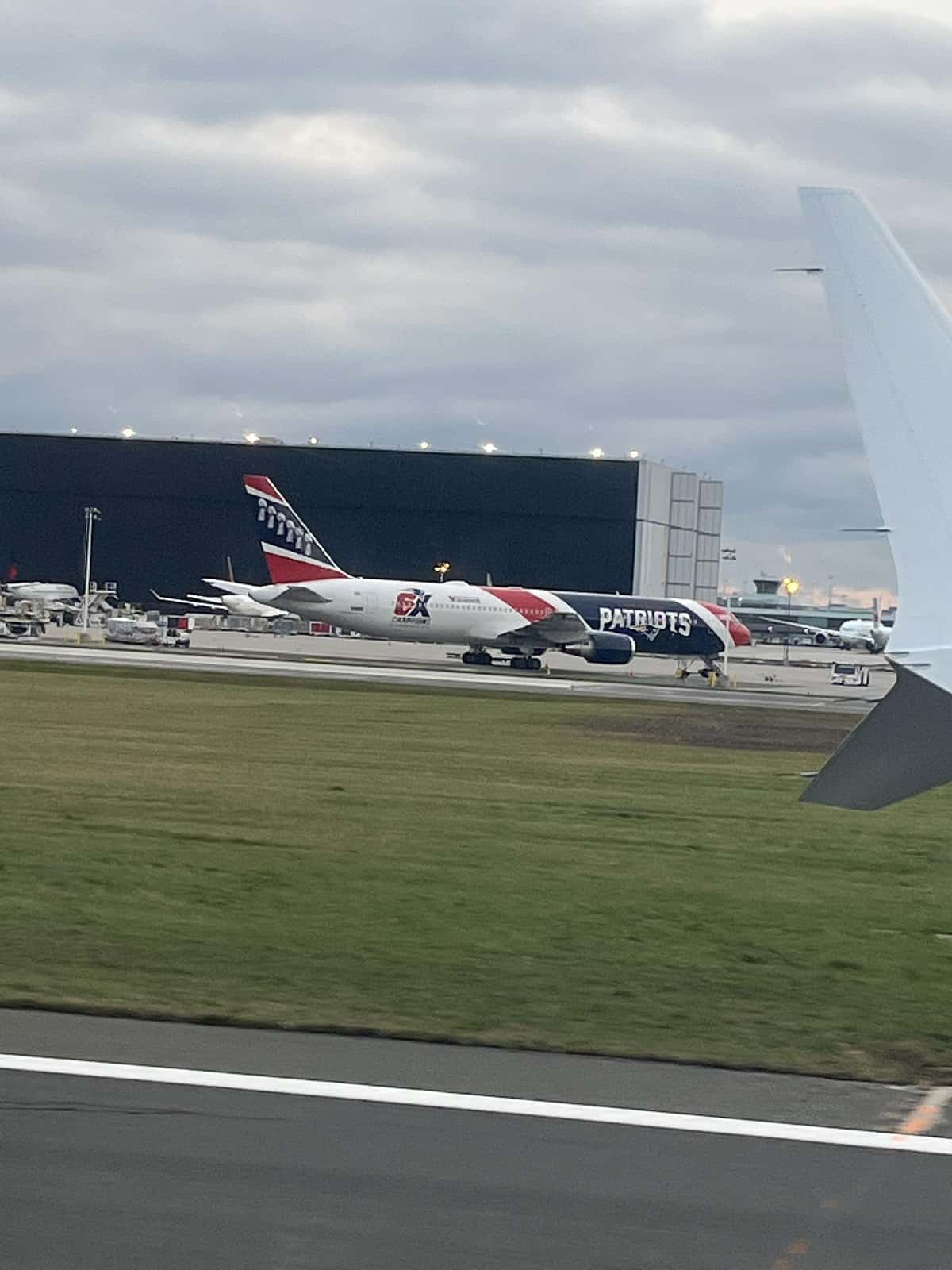 A few travellers at Pearson Airport in Mississauga were surprised to see the NFL New England Patriots' team plane on the Pearson tarmac on Saturday morning. (Photo: Reddit)

The sighting of a unique aircraft at Pearson Airport in Mississauga on Saturday has left many wondering if the National Football League’s New England Patriots took a wrong turn on their way home from Atlanta late last week.

A traveller on board a flight preparing for takeoff from Pearson on Saturday morning snapped a photo of the colourful and unmistakable Patriots’ team jet parked on the tarmac.

Two nights earlier, on Thursday, the Pats spanked the Atlanta Falcons 25-0 in Georgia for their fifth consecutive win.

"Does anybody know why the Patriots plane was at Toronto Pearson airport this morning? Taken as my flight took off." https://t.co/MX2FgR16K6

Did the perennially successful professional football squad, with a few days off work, decide to visit their Canadian neighbours for the weekend and take in the Toronto Maple Leafs/Pittsburgh Penguins NHL game on Saturday night?

Were the Patriots in town to offer some tips to the CFL’s Toronto Argonauts as they prepare for a yet-to-be-determined playoff opponent in the East Division final on Dec. 5?

Did the club’s players want to check out the just-renovated Sheraton Gateway hotel at Pearson, or the shopping at Mississauga’s Square One Shopping Centre?

In all likelihood, the answer is none of the above.

The undefeated URI football team thought they had a long bus ride to Maryland ahead of them for their game against Towson, but Robert Kraft surprised them with a lift on the #Patriots team plane 🥲

The Patriots’ team jets—the club actually has two used Boeing 767s it bought several years ago for a reported $10 million and emblazoned with the team logo and colours—are used for things well beyond getting the players, coaches and others to and from games and other destinations.

As the lone NFL club with a private team jet, or jets, the six-time Super Bowl champion New England Patriots deploy the huge aircraft for various purposes. Since the COVID-19 pandemic began, the team planes have been used to fly masks, healthcare workers and vaccines from place to place, as needed.

The franchise and its owner, Robert Kraft, also used the planes to send relief to Haiti after a devastating earthquake just a few months ago.

When not being used for team purposes, the jets are also rented out.

The other NFL clubs don’t exactly miss out on luxury flying, despite not having their own team jets. They fly in style aboard chartered flights.

BOSTON — The New England Patriots team plane was loaded with supplies at Logan Airport Saturday for a trip to Haiti, where a recent 7.2 magnitude earthquake killed nearly 2,200 people and injured more than 12,000 people. | @WCVB https://t.co/GZGdaOydrr