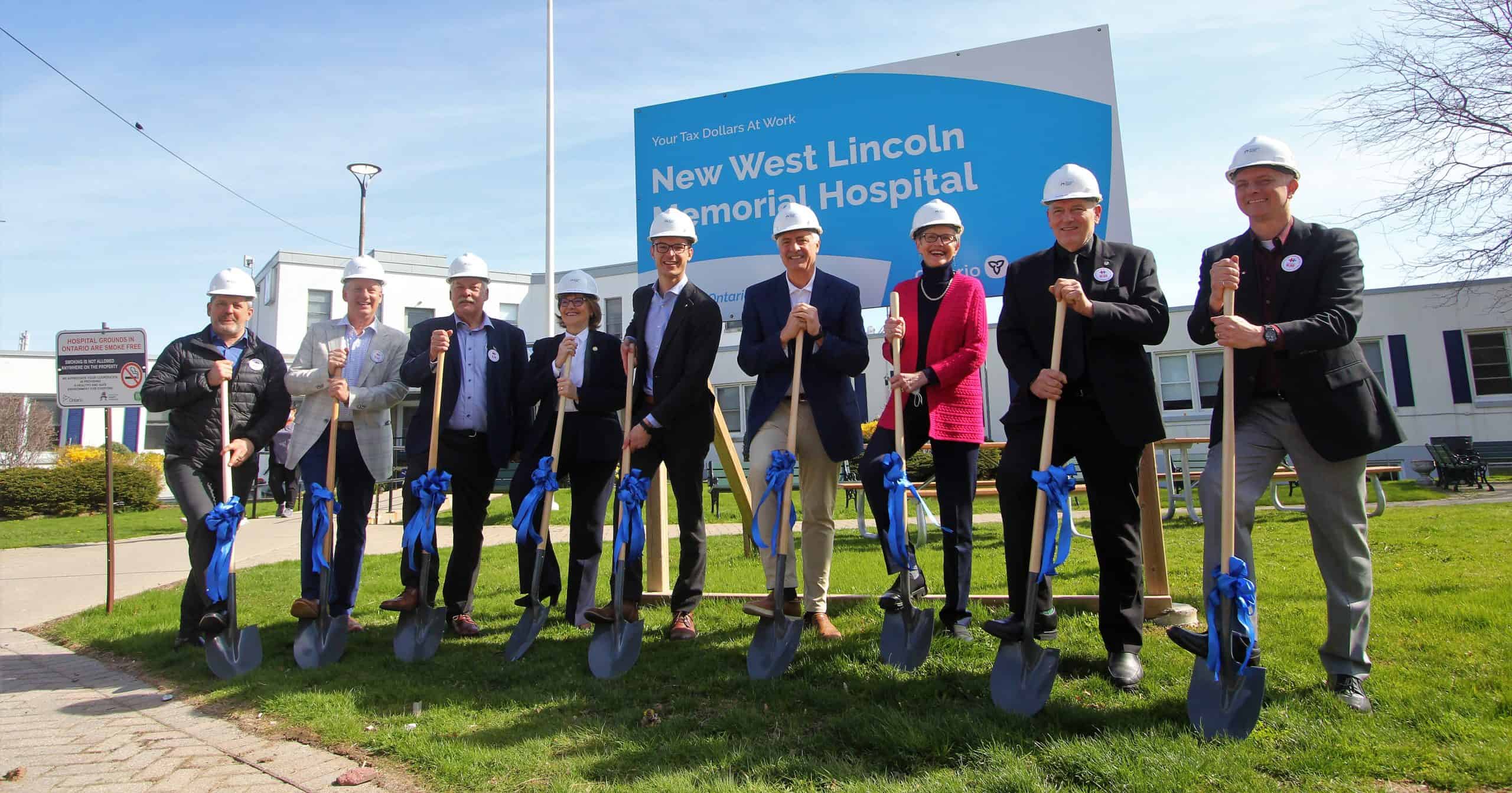 (From Left) Andrew Smith, Kevin Antonides, Tony Joosse, Lincoln Mayor Sandra Easton, Niagara West MPP Sam Oosterhoff, Rob MacIsaac, Mary Volk, Grimsby Mayor Jeff Jordan and West Lincoln Mayor Dave Bylsma put the shovels in the ground for the new West Lincoln Memorial Hospital.
Back when he ran the province from 1995 to 2002, Premier Mike Harris wanted to shut down the West Lincoln Memorial Hospital with one of his rounds of cost-cutting. The neighbourhood around the hospital, built in the 1940s, screamed in protest under Harris finally backed down.

But even then, the hospital, which is fairly small compared to the more modern ones in Welland and St Catharines, was in desperate need of upgrades.

Ontario governments changed from leader to leader and party to party over the next few decades but the West Lincoln Memorial Hospitals never did get any funding for renovations.

“This financial close and the ground-breaking of our new West Niagara hospital is historic news for the people and patients of Niagara,” said Oosterhoff.

“I am thankful to have been able to work with many to get the shovels in the ground for this new hospital, and I am excited to see the project unfold over the coming months, as a modern world-class hospital comes to Niagara West.”

The three western Niagara mayors were equally enthusiastic about the long-awaited announcement because even though their ceremonial shovels had pretty ribbons on them, it meant the project was finally a go.

“The hospital rebuild project has been tirelessly advocated for by our community,” said Jordan. “It is very exciting to see shovels in the ground, knowing that all of our residents will benefit from this investment in quality of life.  It’s a great day for Grimsby!”

Easton echoed his sentiments, noting, “We are very pleased to see the construction of a new hospital that will benefit the residents of our (three) local communities.”

Infrastructure Ontario has awarded a fixed-price contract of $224 million for the project.  The new West Lincoln Memorial Hospital will be constructed behind the existing facility, allowing the hospital to remain operational until the new one is built.

The Ministry of Health funds 90 percent of the new hospital construction costs.  The remaining 10 percent, as well as 100 percent of furniture, fixtures and equipment (FF&E) costs, are covered by the local share campaign, which is set at $50 million.