Should Yuan Ming Should Stay Open on Stat Holidays in Mississauga? 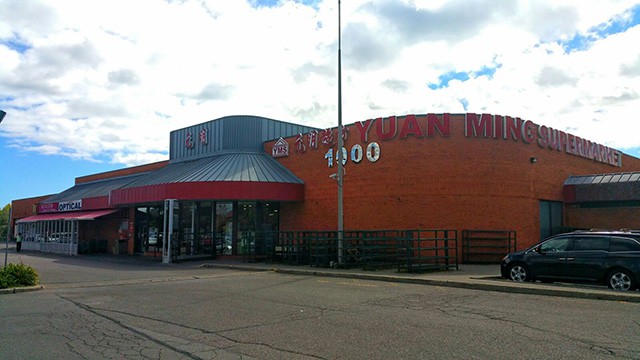 There will now be another grocery supermarket open for business during statutory holidays.

Yuan Ming Supermarket along Burnhamthorpe Road, which bills itself as one of the top supermarkets in the Greater Toronto Area, will be allowed to stay open during stat holidays because of a municipal bylaw passed by regional council that received final approval at the Sept. 8 council meeting.

According to a recent Mississauga News article, the bylaw was passed to legalize an exemption under the Retail Business Holiday Act. The act specifically requires that retail businesses be closed on all the mandated statutory holidays in Ontario, but it does allow some to remain open. Currently, Bramalea City Centre in Brampton, Square One and T&T Supermarket (on Grand Park Drive and Central Parkway) have this exemption.

The exception that applied to Yuan Ming is ‘locations established as tourist attractions by specific municipal by-laws.’ In other words, Yuan Ming could be classified as a tourist attraction, hence the need to stay open. Councillor John Kovac, however, expressed concern over the exemption by basically using the slippery slope argument.

Councillor Kovac doesn’t believe Yuan Ming can be categorized as a tourist attraction, and believes it sets a precedent that would make it impossible for the region to deny future applications on such grounds. Kovac asked, “to what extent can a supermarket be deemed a tourist destination?” He suggested there was too much reliance on a consultant hired by Yuan Ming to bring information forward to regional council and that notice of a public meeting was not widely circulated. Also, Councillor Kovac was worried that undue pressure could be placed on employees to work on holidays. In contrast, Mayor Crombie indicated her support for the exemption, saying it was consistent with other ones granted in the area. She also said that different communities celebrate different holidays and observe different holy days that the legislation does not recognize.

Several other shopping establishments in the region have presented themselves as tourist draws with a positive impact on the local economy during holidays and successfully lobbied for exemption, such as T&T. And let’s be clear; this doesn’t mean every Asian grocery store in the province is going to get the classification that they’re a tourist hotspot; it’s really based on economic output and the amount of business they attract during holidays when many families would take that time to go grocery shopping anyway.

I feel somewhat obligated to speak on this matter on a personal level. In case you can’t tell from my last name, I am Chinese-Canadian. First off, it’s just a cultural thing; during Western statutory holidays when most people have the day off, we treat it as any other weekend to either get some grocery shopping done or sneak in some extra hours at work. It’s also an issue about cultural approaches to work. Keep in mind that I’m not saying that people in western cultures aren’t hard working; it’s just that western culture emphasizes balance between work time and personal time much differently than Asian culture. In Chinese culture, a strong work ethic is what drives one’s self; it’s not about succumbing to greed and trying to get as much money as possible for the sake of money. Money is seen as a necessity rather than just something to have, a needed part of everyday life. I’m sure people of every culture can understand that sentiment.

There is also a generation gap between the older and younger Chinese in the community. Most of the older generation are more inclined to want to make more money and therefore do not mind working longer hours and on holidays. The younger generation, especially Canadian-born Chinese (CBC) may want more of a work-life balance. I’d be curious to know if the younger CBC generation feels that way.

Most of the employees at places like Yuan Ming–and T&T as well–are paid on an hourly basis. There’s incentive in that kind of a pay structure to work as many hours or shift as possible. So, I find it kind of amusing that Councillor Kovac would express concern that people working at these stores would be pressured to work on holidays. A good chunk of them probably would be happy to work anyway, if they’re not actually observing that statutory holiday, so they can make some extra necessary income for themselves and their families. His concern is touching, but I think misplaced.

In conclusion, Yuan Ming should get an exemption to stay open. It’s one of the larger Asian grocery chains out there with a lot of customers. Should a ‘tourist destination’ classification be needed to allow them to stay open? Probably not, but perhaps amending the Retail Business Holiday Act to allow other classifications that better reflect the reality of diverse cultures operating in Ontario would be a step in the right direction.