Should This Busy Mississauga Intersection Get an LRT Station? 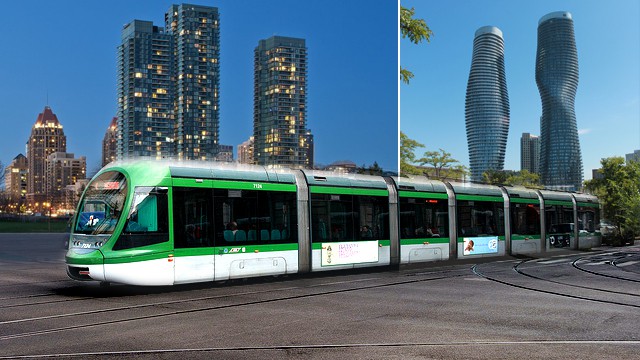 When the subject of the Hurontario LRT comes up, most residents are either skeptical that it is needed (preferring a subway to Toronto) or they are dumbfounded that such as project is taking place on one of the busiest streets in Mississauga.

But rarely would you see residents actually standing up and calling for an additional station on the LRT route, but that is what is happening with people living in a cluster of condo towers and nearby homes at Hurontario Street and Kingsbridge Garden Circle. 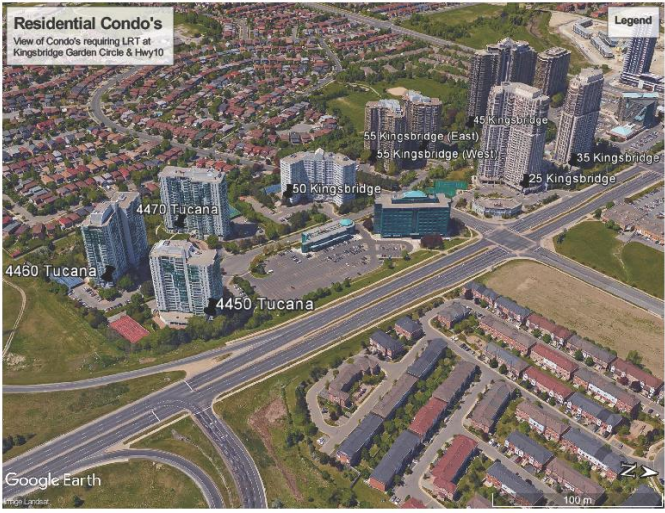 Recently, a community advocacy group called Kingsbridge Matters was formed under the direction of Grant Gorchynski (who is now running for city council), the property manager of the Emerald Centre plaza, for the sole purpose of adding an LRT station in their area. 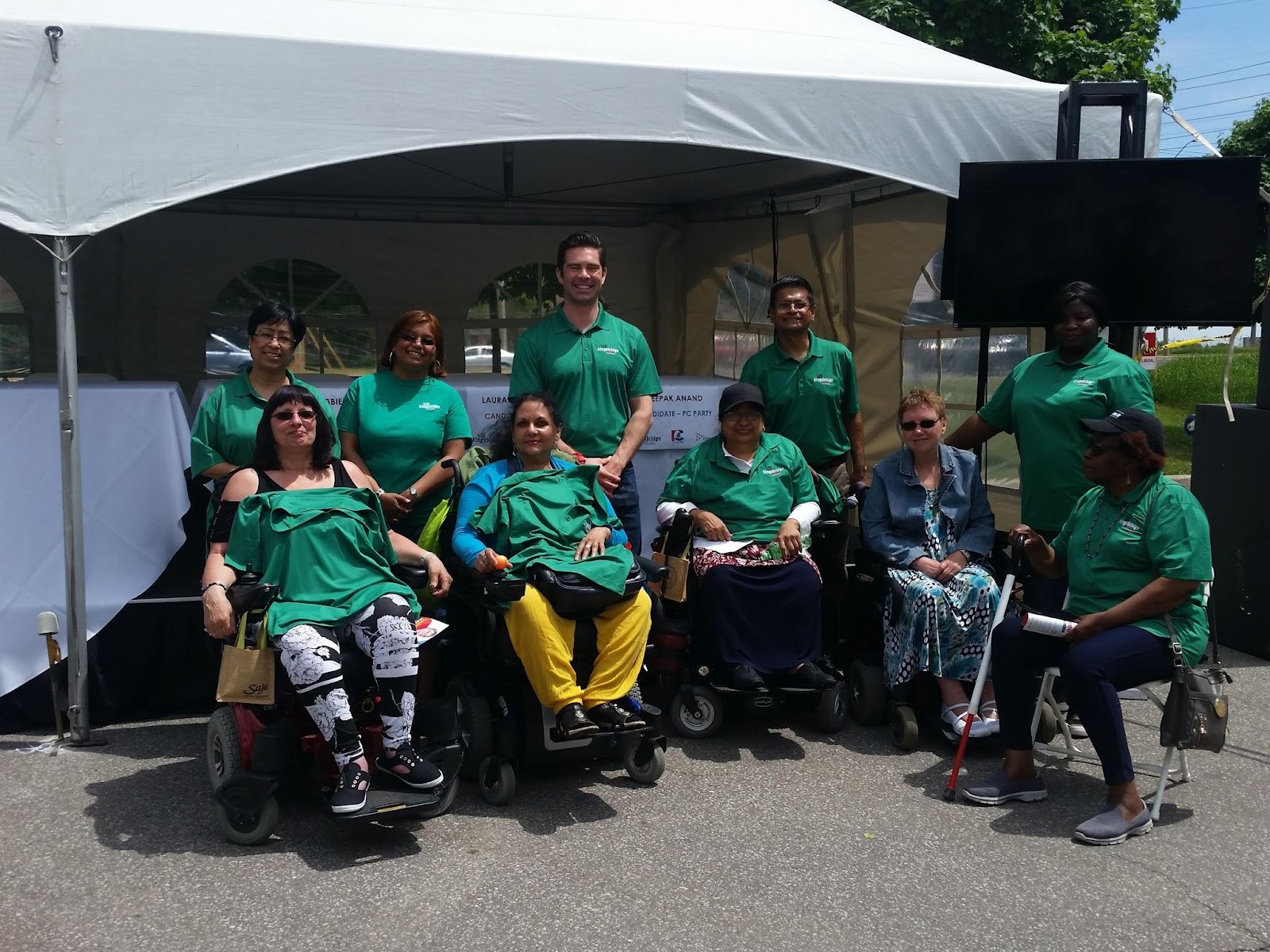 Members of Kingsbridge Matters LRT advocacy group (Grant Gorchynski, the founder, is standing in centre of back row)

They organized a rally back on May 12, and a number of candidates who were running to be the MPP in the Mississauga Centre riding were openly supportive of adding a station.

A subsequent public event with those MPP candidates was held on June 2, and the main question was how they would get an LRT station at Kingsbridge. Candidates in attendance were:

The current MPP and other candidates gave various statements in regards to their position on an additional LRT station. Kusendova cited her experience as a registered nurse and how accessibility to medical services was very important, and Daid said that she was proud that the LRT is a Liberal project, but “they should go back to the drawing board” to review adding another station.

Kaminker said her experience as a librarian was important in her skillset when it comes to providing access to services, while Roach said her status as an independent candidate means she is not beholden to the party structure and party line, hence she would have a better chance to advocate for an additional LRT station. “If this stations is not included now, it will never happen,” Roach said.

Overall, the candidates didn’t have much to say in terms of specifics on how they would get an LRT station to Kingsbridge, other than saying they support it and would fight for it. In all honesty, Gorchynski demonstrated a higher level of knowledge on the specifics than they did.

But you might be asking yourself, does this area need a LRT station, and what evidence is there to suggest it does? 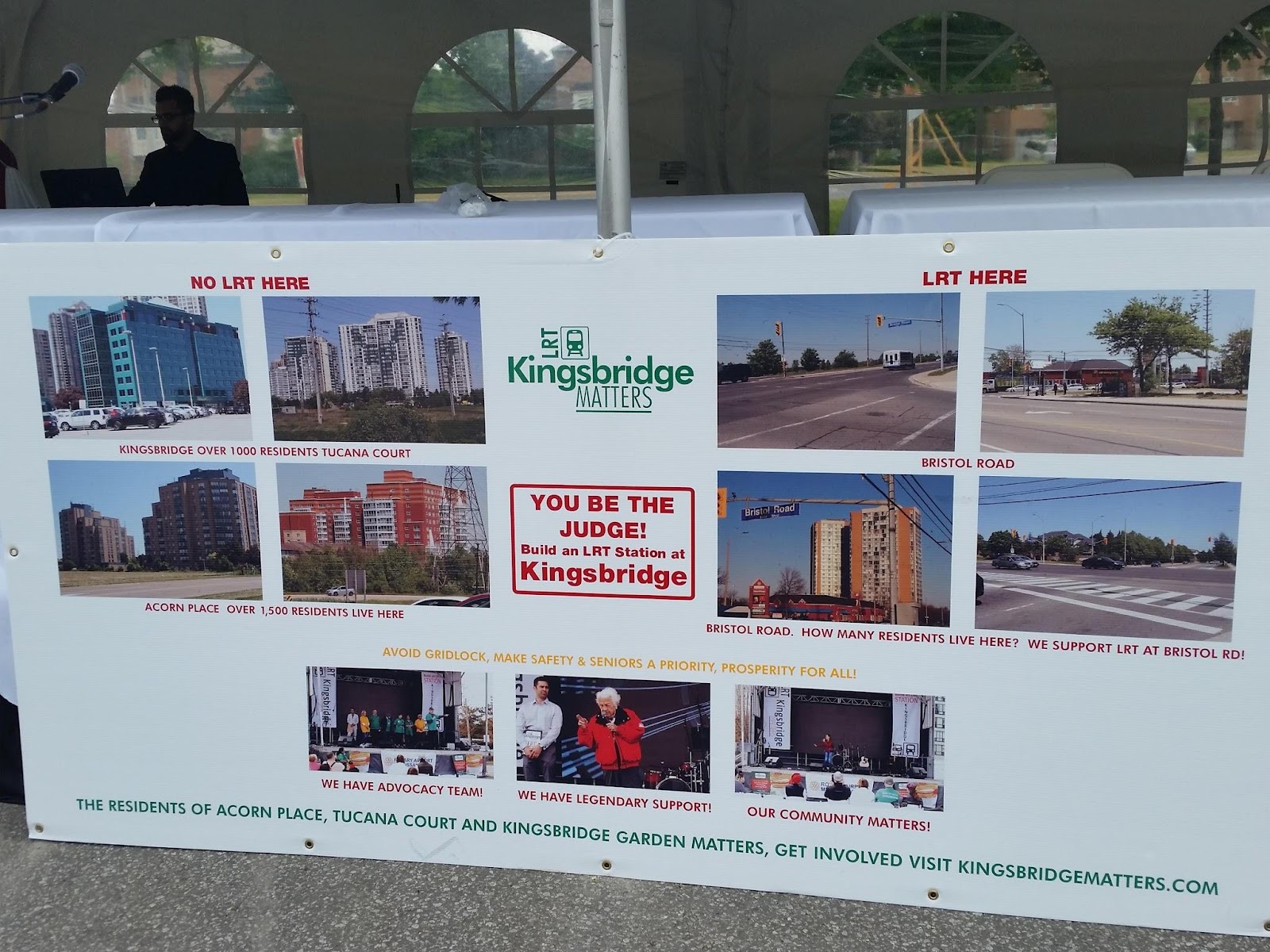 Kingsbridge Matters published a report available online with various reasons listed as to why this area needs an LRT station. One main reason is that with 12,000 people living in the area, there would be better access to the plaza with an adjacent LRT station next to it.

There were many seniors and disabled people in the community and from other parts of Mississauga, that if they need to go to the medical centre that means they would have to get off at the future Eglinton station and walk a block or two before getting to their destination, which is a dangerous walk even for regular able-bodied people.

Here are some pictures of the plaza; as you can see there are a number of businesses and service providers here, such as medical clinics, law office, and restaurants. 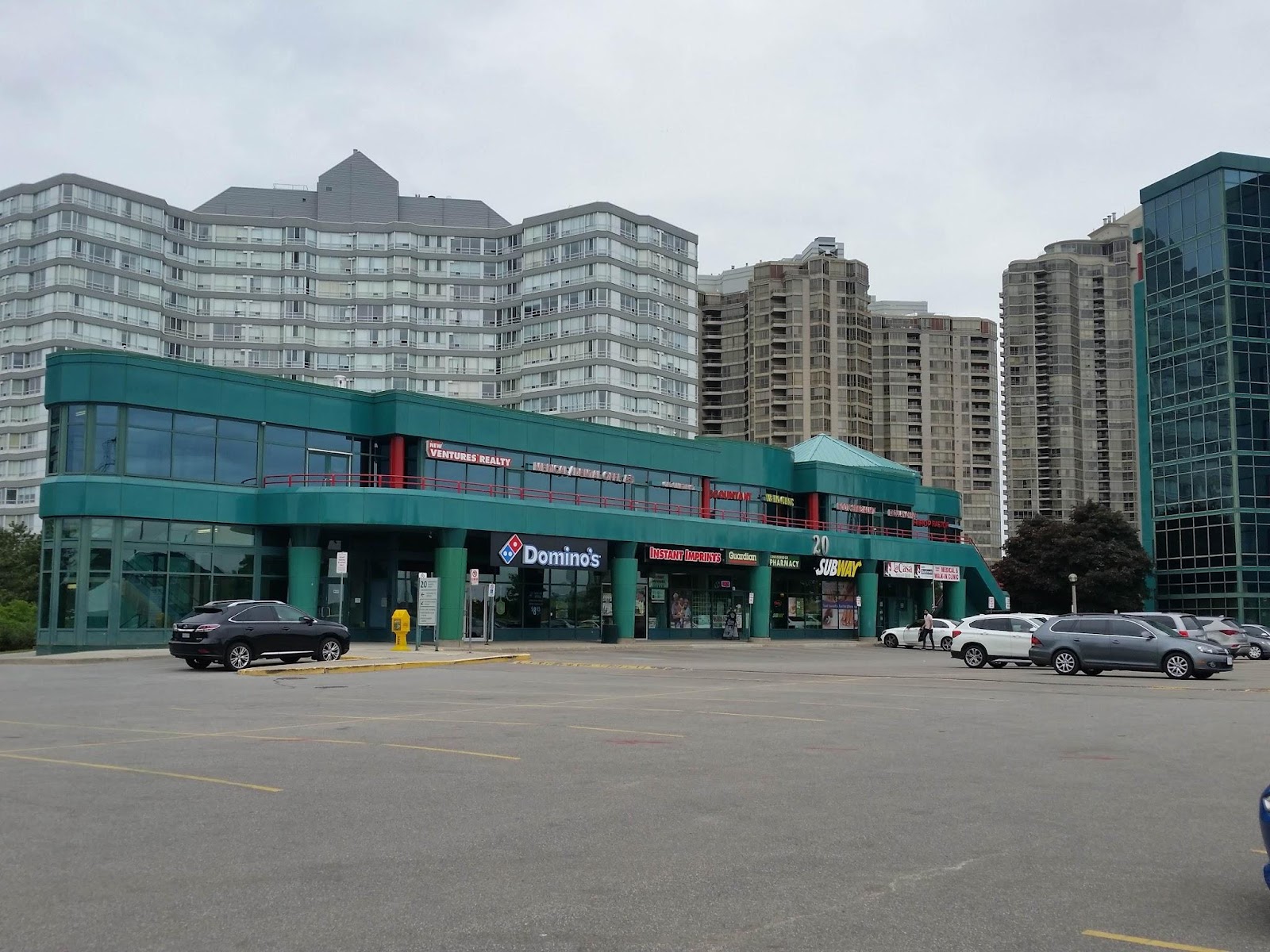 There is also a commercial office building in the same plaza that houses a number of offices, including an office for Kingsbridge Matters itself that plans to stay there until they get their LRT station. 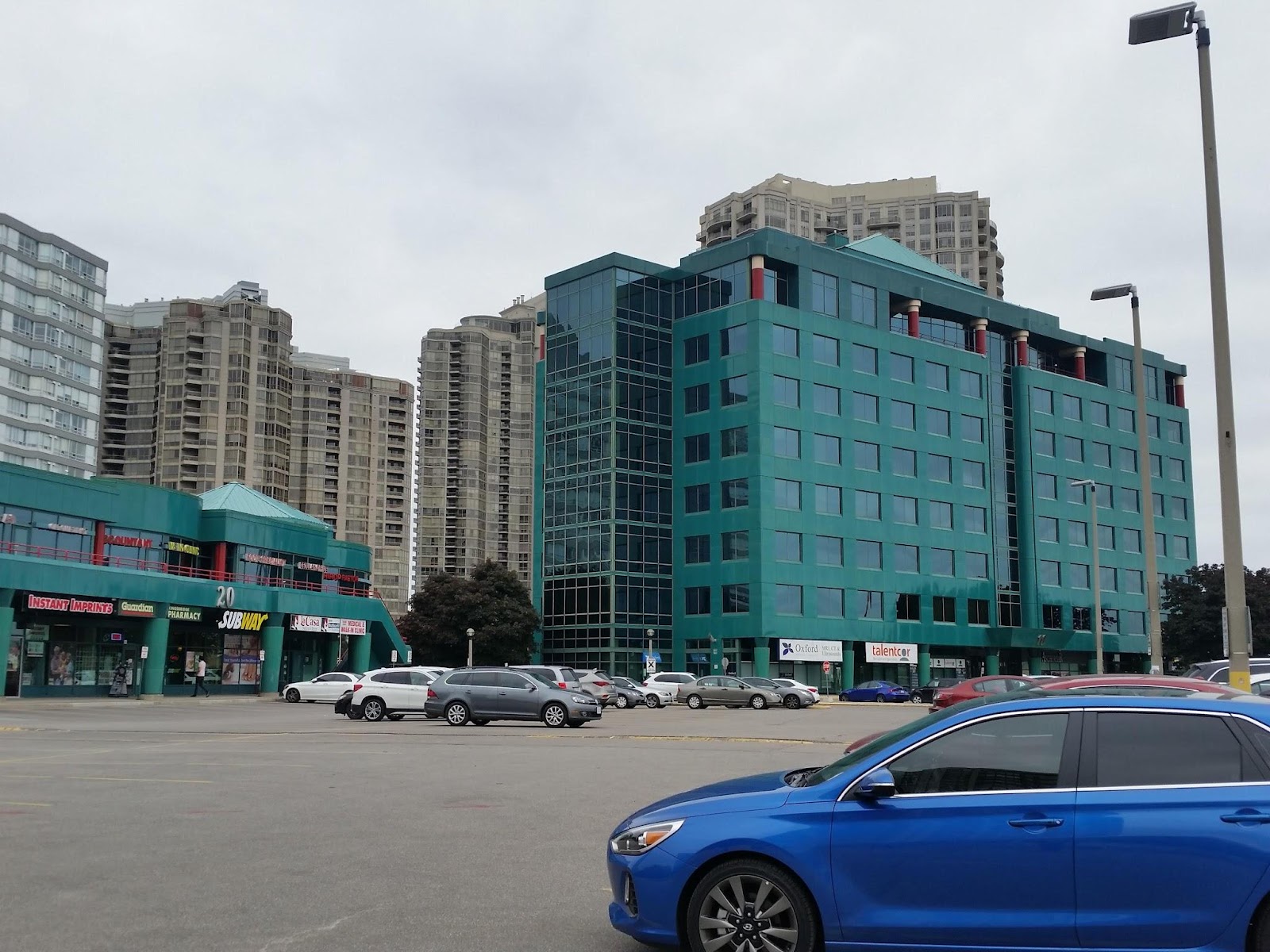 An new buffalo wings restaurant at the ground floor level where the Stir Kitchen Resto bar used to be. 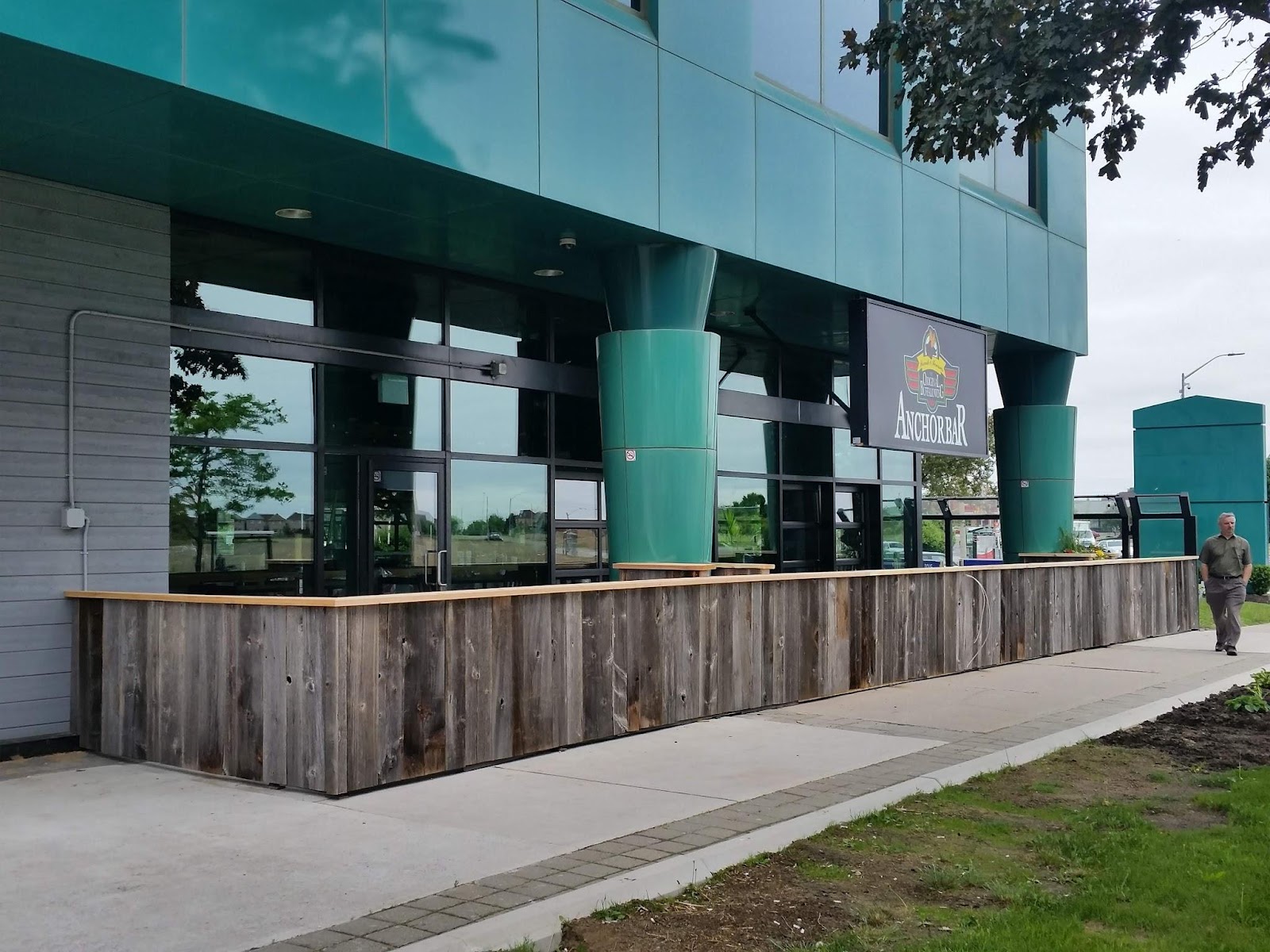 Some of you may be wondering specifically where you could locate a potential LRT station. The plaza itself could be redeveloped to integrate an LRT station alongside all the aforementioned services, but the Kingsbridge Matters report also shows there are plots of land around the area set aside for development. 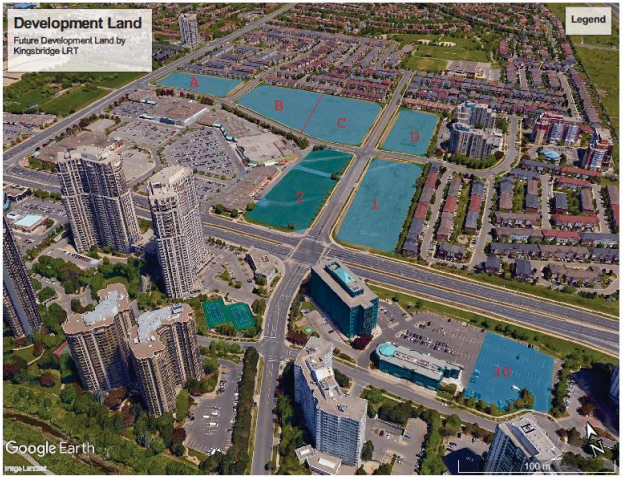 Gorchynski said he spoke to a developer who is planning to put in more residential units across the street on some of that land, so that population of 12,000 is only going to increase in the coming decades.

He also pointed out contrasts in how Metronlinx, an organization that he did not have very kind words for, did for some of the planning along the LRT route. For example, Mineola (near Port Credit) is primarily an area of single detached homes and has a lower density score than Kingsbridge, but they are getting a station.

One other issue that Kingsbridge Matters pointed out that indicates that while Metrolinx says plans have already been set in stone, they are planning to install a transformer (power station) right at the foot of this condominium: 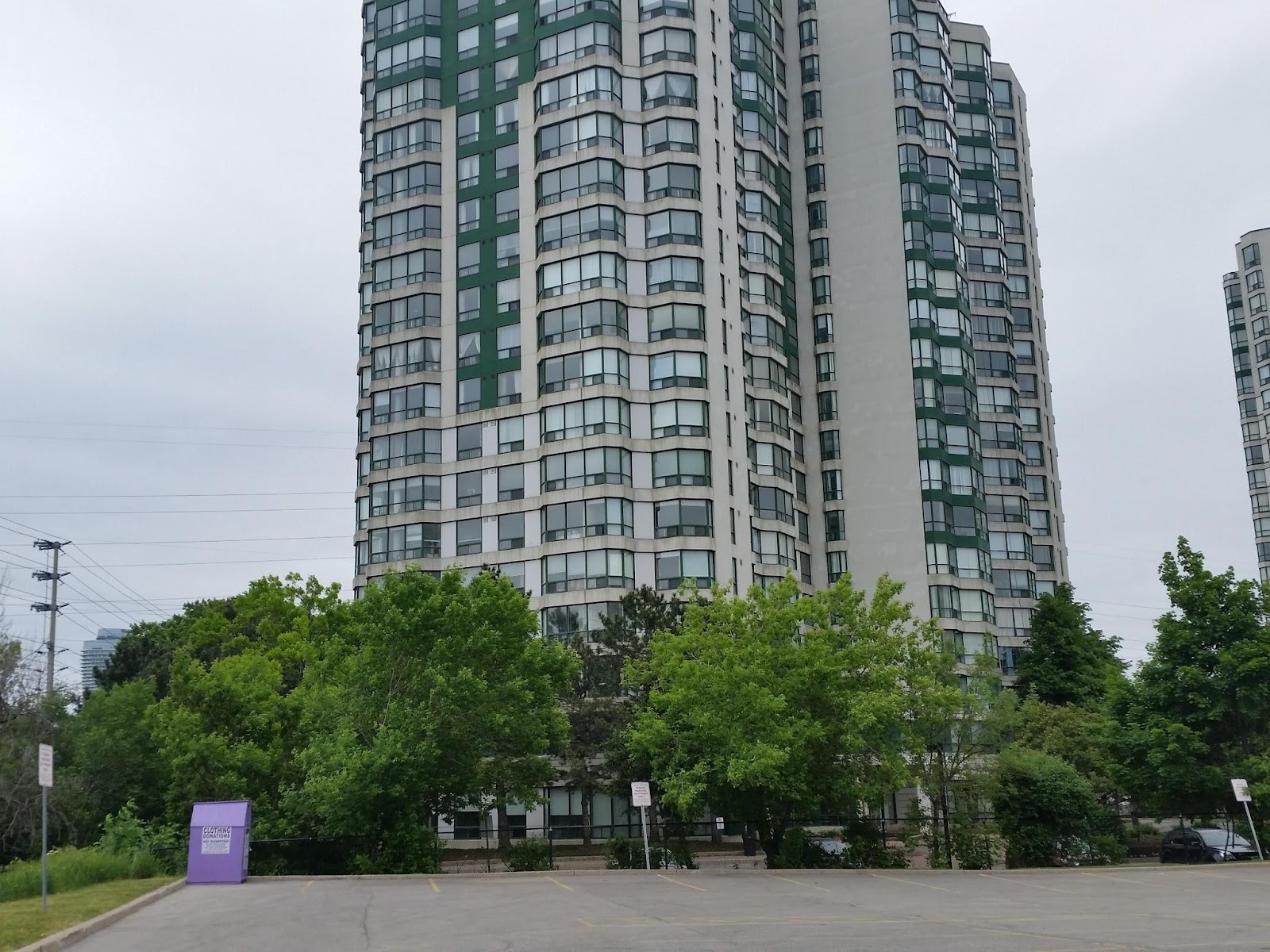 Gorchynski pointed out there was available land for a transformer right across the street: 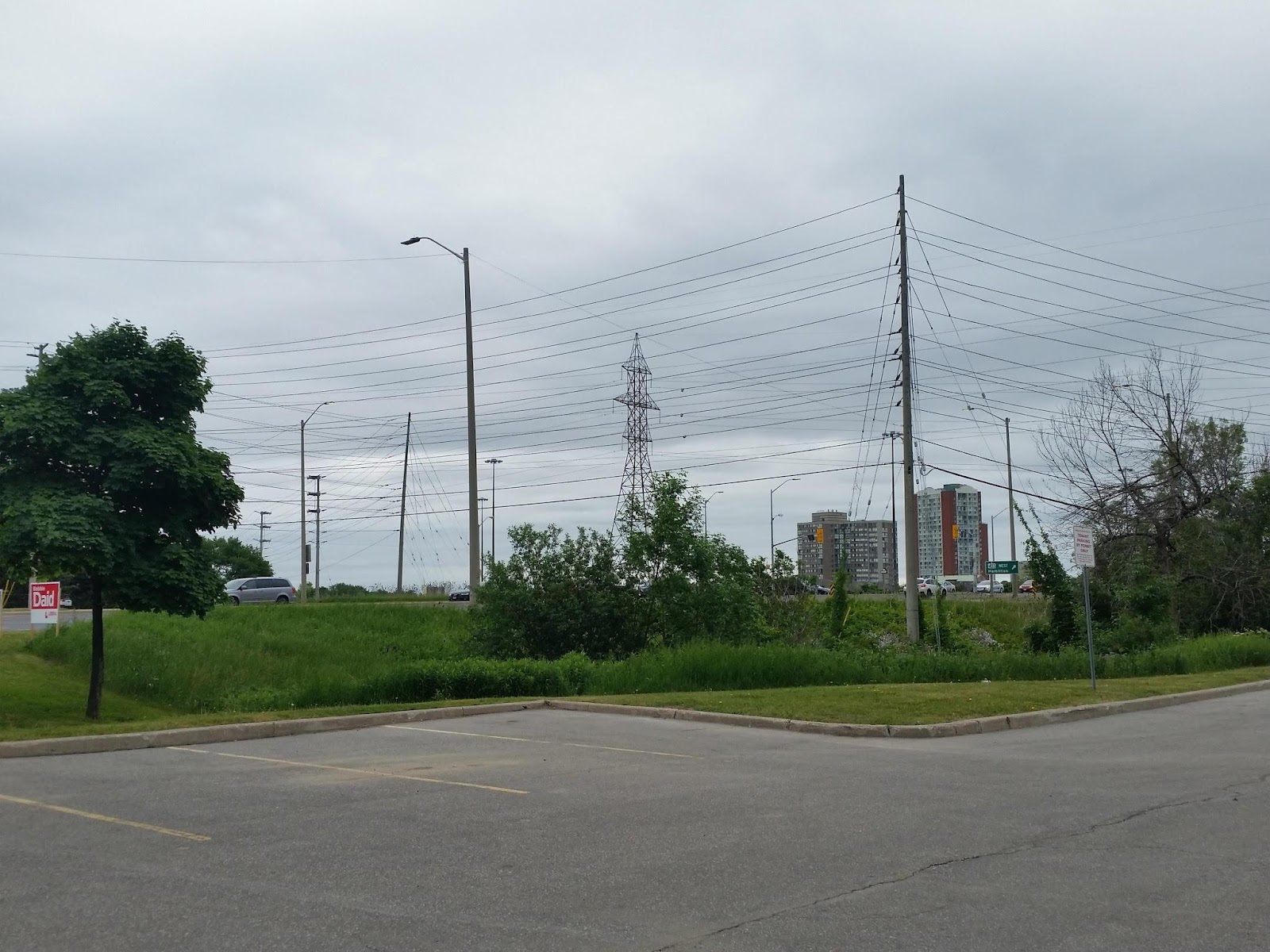 In an email reply to insauga.com, Metrolinx says the transformer, known as a Traction Power Substation, is a common component of transit and LRT systems worldwide, in no way hazardous and Health Canada concluded that scientific research does not demonstrate that electric and magnetic fields cause or contribute to adverse health effects.

Metrolinx also said the TPSS is a building similar in size to a shipping container, and they are working with the city and property owners to minimize the impact of the TPSS footprint and to ensure it fits with its surroundings. All the electrical equipment is enclosed within a locked building, which provides both security and sound absorption, and there may be low audible sounds similar to an air conditioning unit coming from it once it’s operational.

As for adding a new LRT stop, in their email Metrolinx says that would require revisiting the Environmental Assessment process for the project and impact project data collected through numerous studies around traffic, timing for the headway, and vehicle requirements.

The Request for Proposal (RFP) for the project was sent to pre-qualified bid teams on August 17th, and is now in the “in market” period where the bid teams are working on plans based around reference concept designs including stop locations set in the approved EA.

Overall, the main point Kingsbridge Matters is trying to get at is that while the Hurontario LRT is supposed to help move people faster, it’s ironic that in their mind some of those same people the system is supposed to serve are being left out.

If Metrolinx is going to build a transformer in this neighbourhood, why not add on a LRT station so these people can reap the benefits of the new transit system?

Would you like to see a station for the Hurontario LRT at Kingsbridge Garden Circle?