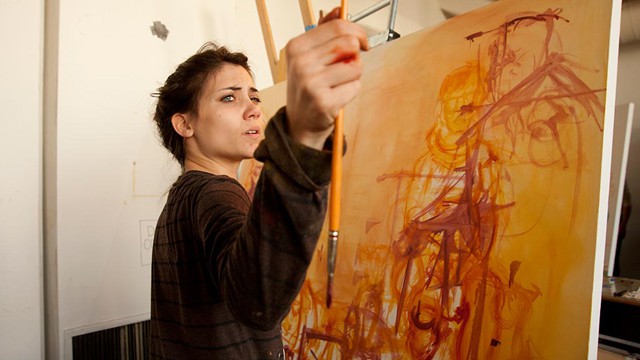 It’s hard out there for an artist.

Although the idea of the artist’s lifestyle — the cafes, the intellectual discussions, the exposed brick lofts, the sexy and dramatic drug abuse and alcoholism — is enticing, the reality can be much less glamorous.

People who want to make a living off their work, whether they be painters, sculptors, writers, musicians or designers, can sometimes struggle to make ends meet. After all, the art world is finicky. Gigs come and go and unless you make it big in your chosen field, it can be hard to live off the modest sales of your literature or paintings.

One company that operates in our neighbour to the east has a small but intriguing solution: provide lower-cost housing for local artists.

According to a recent article in the Toronto Star, some creative types can qualify for less-than-market price rental accommodations.  The Star talks to artist, goldsmith and jewelry designer Hannah Cowan, a 33-year-old Toronto woman who pays 80 per cent of the usual market rent for a 550 sq. ft. Queen St. W. loft. According to The Star, Cowan lives in a unit owned by non-profit organization Artscape — a company that offers affordable housing to artists who cannot afford the city’s high rental rates.

Although the deal might seem too good to be true, there are checks and balances in place to ensure renters do indeed qualify for slashed rent. According to The Star, applicants must qualify for social housing through the city’s centralized waiting list. And speaking of the city, they’re quite involved. Eighty Toronto-owned units (that will be operated by Artscape) are going to be available in the upcoming Aquavista condo at 80 per cent market rent.

Some might wonder why units are specifically set aside for artists when so many lower-income residents are in need of affordable housing, but the program makes sense. Artists do indeed add luster and personality to a city. They imbue it with culture, setting it apart from surrounding districts and giving it a personality all its own. Cities are proud of their homegrown art and artists — and so they should be.

This begs the question: could Mississauga (and Mississauga artists) benefit from a similar partnership between the city and an artist advocacy organization? Our arts scene is small compared to Toronto’s, but it is alive. We boast Visual Arts Mississauga, The Living Arts Centre and the Art Gallery of Mississauga. We feature public art installments and host festivals and events that celebrate both local and international art. We have galleries and live music venues.

A program like this could provide incentive for artists to stay in Sauga and contribute to its growing arts scene from within. It could also be included in proposals that Peel work towards creating more affordable housing for lower-income residents in general. Artists can indeed drive a city’s economic engine, so it makes sense to treat them like any other lower-income worker who has difficulty managing expenses on a limited budget.

What do you think? Should the city consider bolstering its creative community through similar initiatives, or is the cause a little too boutique to resonate with residents?