Should Mississauga Be More Vigilant About Water? 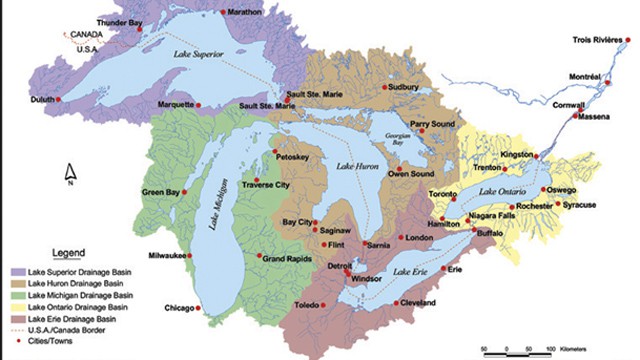 Waterfront development is the key to revitalizing cities and communities adjacent to bodies of water as we previously documented. But not only is redeveloping communities around our water important, so is protecting that water itself. A decision over water diversion for one U.S city may have potential long term ramifications about water usage in the GTA and beyond.

The GTA lies within what is known as the Great Lakes Basin. The Great Lakes contain about 20 per cent of the world’s freshwater. While water is commonly accepted as a renewable resource, in the case of the Great Lakes, it is not. Only 1 per cent of the water in the lakes is replenished through snow melt and rain; the other 99 per cent was left over by melting glaciers more than 12,000 years ago. Once it’s gone, it’s gone for good.

Recently a number of cities and regional governments in Ontario, such as Halton Region, Oakville and Sault Ste Marie, joined with several other municipal jurisdictions in opposing water being diverted from the Great Lakes Basin to a small city called Waukesha (population 72,000) in Wisconsin, USA. Back home, Mississauga City Council, under the leadership of Councillor Jim Tovey, worked closely with a bilateral working group to formulate the position against the diversion of any water outside of the Great Lakes Basin and the St. Lawrence River. This group is called the Great Lakes and St. Lawrence Cities Initiative, and consists of cities not only in Ontario and Quebec, but eight U.S states that surround the Great Lakes.

Waukesha is a small city outside Milwaukee, WI, and just right outside the Great Lakes Basin. Waukesha’s own aquifers were low on water, and its groundwater was contaminated with high doses of radium. Waukesha needed another source of water, which was found in nearby Lake Michigan. As a result, the US states from around the Great Lakes approved an application for Waukesha to draw approximately 30,000 gallons of water from Lake Michigan.

Since this matter is completely within American jurisdiction, Canadian cities and towns who rely on the freshwater resource have no say in this decision. Lake Michigan is quite far away from Mississauga and the rest of the GTA, but we still share one of the most unique bodies of water on the planet. What happens out there, one small city drawing 30,000 gallons of water in order to sustain itself, can have ramifications on our side of the Great Lakes in decades to come.