Shopping in downtown Brampton can pay off big during Bramopoly game

Downtown Brampton BIA is offering adults and kids alike a chance to win prizes during its Bramopoly game.

Based, of course, on the classic Monopoly game, Bramopoly encourages people to shop local and visit downtown businesses.

In addition to collecting stickers to fill out your game map, other ways to win include uploading a picture taken at one of the Selfie Stations in downtown Brampton and tagging @downtownbrampton and #BRAMOPOLY or being among the first hundred players to submit a completed map to the BIA office.

In addition, there will be weekly draws and the grand prize draw.

Kids aged 3-12 can join in on the fun as well. They’ll be entered into a draw for a gift basket when they colour in their own Bramopoly map.

The promotion runs until Sept. 4. 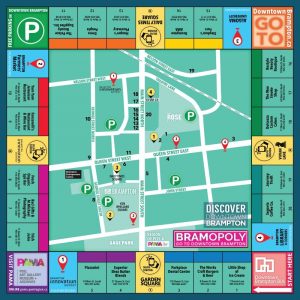