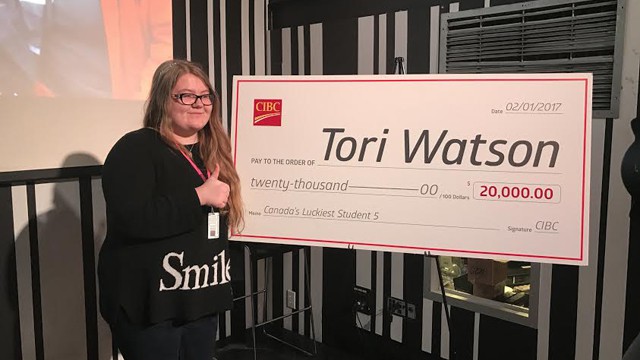 While most students expect (as they should) to have a good time during their post-secondary years, few expect to walk away from an on-campus event with an extra $20,000 in cash and a host of other fabulous prizes.

While most students expect (as they should) to have a good time during their post-secondary years, few expect to walk away from an on-campus event with an extra $20,000 in cash and a host of other fabulous prizes.

“I can’t believe it,” Watson told a group of reporters huddled around her on stage in the Davis Campus pub. “I’m still in shock and my throat hurts because I’ve been screaming so much.”

For many students, the opportunity to go to school and train for a career is accompanied by anxiety surrounding significant student loans. It’s also no secret that school, though rewarding, can be stressful in general. For that reason, a contest organized by the StudentLife Network aims to make one person’s life a little bit better by giving him or her a great big cheque and a host of other prizes, including trips, money for groceries and more.

The contest, known as Canada’s Luckiest Student 5, is open to all Canadian students in good standing at their high schools, colleges or universities who are over the age of 16. The contest is run in conjunction with such major brands as CIBC, Air Miles and G Adventures and students can enter online and gain extra entries (thus increasing the odds of winning) by liking certain social media pages and taking surveys.

The winner is selected at random.

While prizes may vary from year to year, Watson walked away with about $45,000 worth of cash and goods. Beyond the $20,000, the feature prize also included a trip for two to Costa Rica, a $2,500 shopping spree at Topshop/Topman, a year of Pizza Pizza and more.

“Half of my debt is now gone and I’m already amazed by it,” Watson told reporters. “I really need a new laptop, so maybe some of the money will go to that.”

When Watson took the stage to claim her prizes, she was surrounded by an impressive entourage of friends and family–friends and family who somehow managed to keep the tremendous win a secret right up until Watson was called on stage.

The win was particularly exciting when considering the fact that Watson has entered the contest every year since its inception.

“This year was really big on sports questions for the vouchers, so I was asking my dad questions all the time because I know nothing about sports.”

While Watson walked away with the biggest prize, other attendees walked away with Blue Jay and Raptor tickets and everyone was welcome to crowd the stage and go for the free swag–namely some cute stuffed penguins–being tossed to the crowd.

Congrats to Tori Watson on her incredible win!