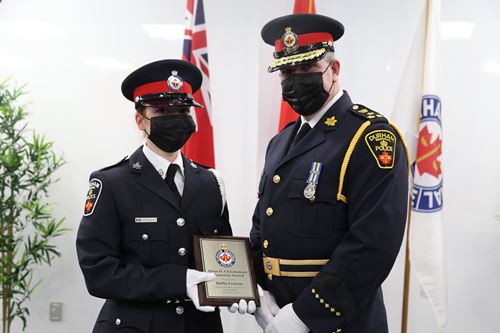 Durham Regional Police are celebrating the graduation of 17 new recruits set to serve across the Region in a ceremony January 20.

This ceremony saw a return to a remote audience following the last batch’s graduation in September. While that ceremony allowed for friends and family to gather and watch, this time supporters had to view virtually.

Typically the graduation ceremonies include performances by the pipe and drum band and a choir, they were unable to attend this time.

Instead the recruits took they oaths of office while masked and socially distanced. After meeting with Interim Chief Todd Rollauer, each new officer received their badges.

Class valedictorian Cst. Bryan Maravilla stressed the importance of helping others in his speech. “We wouldn’t be here without your love and support, and we thank you,” he said to supporters.

Cst. Hallie Franzin, meanwhile was awarded the Allan D Christiansen Memorial award as voted by her peers in the class. This award was presented, “for her positive attitude in life and training, exceptional leadership qualities, dedication to a high level of personal fitness and commitment to volunteering.”

Cst. Allan Christiansen was a killed in a car crash in 1999 on his way home from the March Past Ceremony after completing his Basic Constable Course at the Ontario Police College. DRPS presents a member of each recruit class an award in Allan’s honour.

“Welcome to our newest recruits and congratulations for your perseverance during these difficult times,” DRPS said in the announcement.