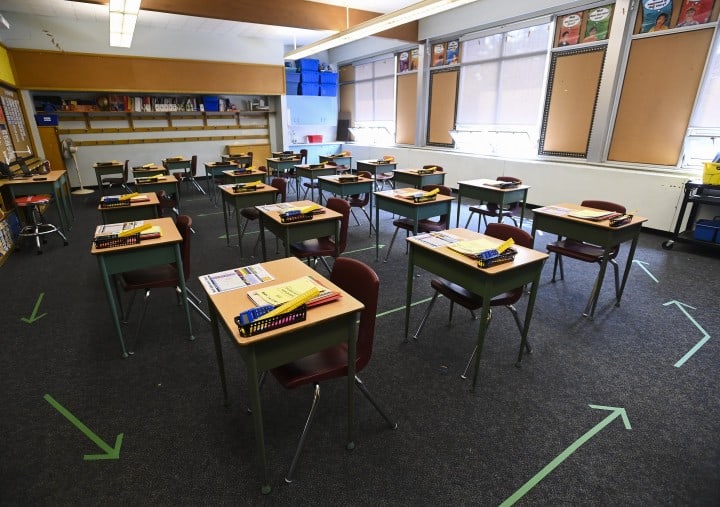 As several Ontario school boards grapple with a rise in teacher absences due to the COVID-19 pandemic, at least one Toronto-area board said it has had to ask administrators, speciality teachers and lunch supervisors to step in.

The Toronto Catholic District school board said those measures have been taken on some occasions to “ensure the safety of students and staff” as it strives to broaden its pool of occasional, or supply, teachers.

“Like many boards across the province, the TCDSB continues to bolster its occasional teacher roster but struggles to address challenges associated with increased teacher absences, greater incidences of short-term sick leave, and an unwillingness of available occasional teachers to accept daily jobs during this pandemic,” the board said in a statement Tuesday.

Multiple teachers’ unions said their members are increasingly in need of leaves of absence due to mounting stress and burnout stemming from the health crisis. Illness and isolation requirements, as well as parenting and caregiving responsibilities, also contribute to absences, they said.

And as more schools experience outbreaks, occasional teachers are reluctant to expose themselves to the virus, making it difficult to find replacements, said Julie Altomare-DiNunzio, president of the Toronto Elementary Catholic Teachers’ union.

Because of COVID-19 measures on cohorting, in-person classes can’t be combined to ensure supervision when a teacher is absent, she said.

And since children can’t be left unsupervised, someone already in the school – including special education or music teachers – can be called in to cover when the board can’t secure an occasional teacher, she said.

“It’s a vicious circle because programs are being cancelled because there’s classes that require a teacher,” she said.

Altomare-DiNunzio called the situation “untenable” and said the union will push for more schools to be closed after the spring break if cases continue to rise and more outbreaks occur.

West of Toronto, the Dufferin-Peel Catholic District School Board (which operates schools in Brampton, Mississauga and Caledon) has recently halted in-person learning at several schools as COVID-19 outbreaks force teachers and other staff into isolation due to stricter public health measures.

The high level of teacher absenteeism and difficulties in finding occasional teachers have placed “immense pressure” on the board’s ability to provide safe supervision and in-person education in some schools, he said.

“On a daily basis, we find ourselves unable to fill almost 50 per cent of all teaching absences in the elementary panel, because not enough occasional teachers are accepting jobs to fill in for absent teachers,” he said in an email.

“In response to situations like this, we have made the decision to temporarily switch to remote-only operation at those schools until a sufficient number of staff have completed their self-isolation and can return to work, or there is sufficient occasional teacher coverage to provide safe and adequate supervision and maintain in-person learning.”

The board is “exploring many options” to ensure students are properly supervised, and has adopted “non-traditional methods of student supervision,” Campbell said, though he did not elaborate on those methods.

The Toronto District School Board also said it has faced “challenges” in finding occasional teachers to cover classes for those who are absent or on leave.

Education Minister Stephen Lecce acknowledged Monday that staffing shortages, rather than public health concerns, have led to the closure of several schools.

He stressed, however, that the government has taken steps to increase the pool of available teachers and occasional teachers by increasing the number of days retired teachers can work without affecting their pension.

The province also created a new temporary certificate allowing some education students nearing the end of their studies to work as occasional teachers when no others are available.

“We do not want schools to close for operational reasons,” Lecce said.

Both the Elementary Teachers’ Union of Ontario and the Ontario Secondary School Teachers’ Federation said occasional teachers would be more likely to accept work if they felt safe in schools.

Meanwhile, Karen Brown, vice-president of ETFO, said vaccinating educators would also alleviate many of those concerns, for occasional and full-time teachers alike.

“Once all vulnerable populations are vaccinated, the government should provide vaccination to education workers who choose to receive it,” she said. “This is one additional way of helping to keep schools open safely and sustainably.”