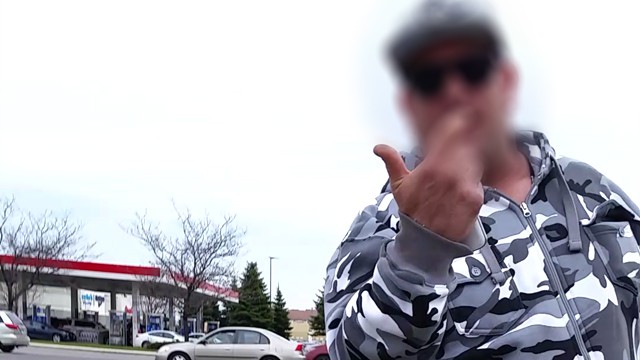 It seems like a scam artist who has been spotted in Mississauga is targeting residents by claiming to be in distress and offering perks and complimentary services at companies he has no association with in exchange for cash.

A while back, we reported that a white, middle-aged man had been spotted in Brampton and Mississauga asking people for cash and promising to pay it back. You can see a Reddit thread pertaining to the incidents here.

There’s also a recording of some interactions here.

Now, a local business has come forward to report that the same scammer is still active and appears to be targeting their operation.

Recently, a representative of Krown Rust Control, a rust proofing company based in Brampton, reached out to insauga.com to report that the scam aritst mentioned in our previous story may be offering people fraudulent discounts and services at their establishment.

“One of the future services that was and is again being offered is Krown rust protection. We have had five issues in the last couple of months of people calling or coming into our center with a story of cash given to a man in need [with] a promise of a free application at our shop,” wrote company vice-president Jeremy Young in an email.

According to Mohamed Ali, the owner of Brampton’s Krown location, confused customers expecting free service are calling the shop about three or four times a week.

“For about a year, this was happening and then it stopped for awhile. It started up again about a month and a half ago,” Ali says. “The man is telling people that he’s the owner’s son and that people can get free service here if they help him out.”

Ali has started showing customers available photos of the alleged scammer and says that many have confirmed they were approached by that particular individual.

“Customers are saying it’s the same guy,” he says. “An older gentleman called this morning and he has the same story. [The man] will say he needs help because his car broke down or he has to pick his kids up from a babysitter. One customer said he gave him $120 because he said he had to get to his wife who was in the hospital.”

Though the man’s story tends to change with every person he talks to, he generally claims that he has no way to get home and needs money to pay for a taxi. Often, he claims to be studying engineering at Sheridan College and says he’s associated with Krown Rust Control and will provide free services as compensation. He’s also been known to say he has a two-year-old that he needs to pick up.

It seems that he will generally try to scam people for upwards of $40-$50.

As for whether or not the man could ever face charges if caught, police say a pattern of behaviour can prompt authorities to act.

“If there’s a pattern [of behaviour] we can look into laying criminal charges,” says Peel police Const. Paolo Carretta.

In the meantime, Const. Carretta is advising residents to be careful and, if possible, do their homework before offering money upfront for (or in exchange for) a service.

That said, sometimes you just have to make a tough judgment call when someone asks for monetary assistance.

“People feed on people’s emotions,” says Const. Carretta. “It’s hard to turn your back on people and walk away, especially since there are people who are genuinely in need.”

If you are approached by someone in Mississauga (victims claim to have seen the man in and around Square One) who requests money in exchange for free rustproofing, be aware that it’s likely a scam and feel free to call the company (or any company named during the exchange) to verify the story.

If you have been a victim of this scam, you can contact the police.