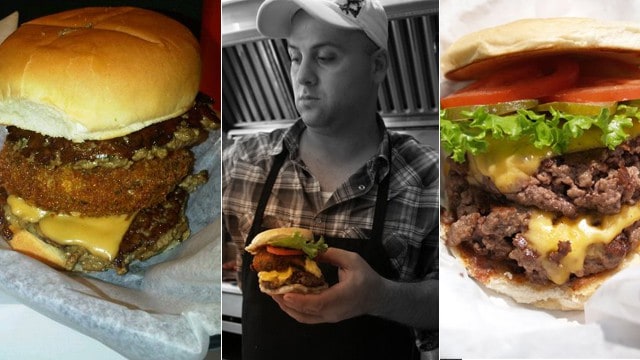 Sauga Success Stories is a new series to insauga.com which profiles Mississaugans and their stories of success.

What is your Mississauga connection?
When I moved from Los Angeles, we moved to Mississauga. That’s where we originally immigrated to.

What do you think of the burger scene in Mississauga?
I think it’s pretty typical of everywhere else in Canada. You’re dealing with just a Canadian style of doing burgers, so it’s usually typically over processed, or over spiced, or a frozen kind of a charbroiled thing. I don’t necessarily think it’s a bad thing. I just think it’s territorially different than what we do.

What’s next for the Burger’s Priest? Global Domination?
We are just going to keep on opening stores. I’d love to take over the whole world but I mean, I can only open as fast as I have people to run it. So, because we’re not franchising, it’s not as easy as going the franchise model. So, we’re slow and steady, and (we will) just keep opening stores.

Would you ever go to the franchise model?
I never say never but it’s not on my radar right now.

In regards to your Facebook menu, what has been the best secret menu?
I’d say the Vatican City.

Where did your inspiration come from?
Definitely In-n-Out (Burger) in California.

What does the priest mean? Where did you get the idea of the Burger’s Priest?
The Burger’s Priest idea comes from…it’s a long story. Let me see if I can shorten it. It comes from Genesis 1 and 2, where people are called to be Priests and Kings over creations. So, the idea of priest is kind of the mediating God to the world and world to God. And you know my understanding of that is in everything you try, do it the best way and show that in a way that is priestly in nature. So, the Burger’s Priest.

What is behind the religions theme of your menu?
Christianity.

So you’re Christian?
Yes. And there’s no gimmick it’s just kind of fun.

There is a lot of competition rising in Toronto for burgers, who is your biggest completion?
To be honest, I haven’t really looked. I wake up every day and try to make good burgers. And I don’t focus on anything else other than this.

Who is your nemesis?
Um…I don’t know if I have one.

What is the secret to your success?
I have no idea. I just kind of kept going and things just happened.

I heard you received death threats for not opening on Sundays is this true?
It is true.

What the hell! What is wrong with people?
I don’t know but some of them are open Sunday’s now.

Was it in the form of letters, voice mail, or email?
Voice mail and it was just one (death threat).

What’s next for Burger’s Priest?
Just keep going, one store at a time.

Where did you go to high school?
TL Kennedy.

Who is your favorite superhero?
Gordon Gekko.

How often do you eat burgers?
Everyday!