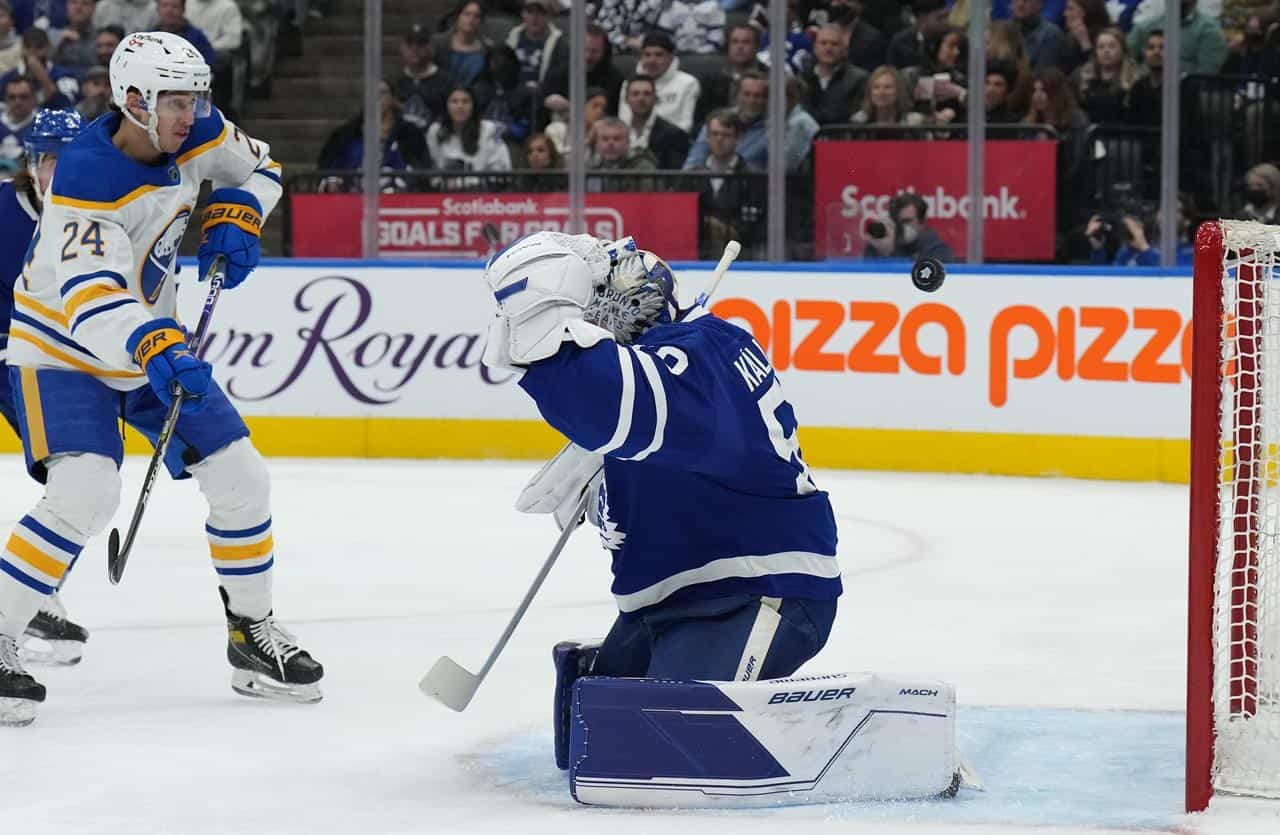 Tage Thompson scored the winner and added an assist as the Buffalo Sabres defeated the Toronto Maple Leafs 5-2 on Tuesday night.

Kyle Okposo, Jeff Skinner, Rasmus Dahlin and Rasmus Asplund, into an empty net, had the other goals for Buffalo (27-37-11). Alex Tuch and Victor Olofsson added two assists each.

Craig Anderson made 23 saves as the Sabres won the season series 3-1-0 and became the only team to defeat the Leafs three times in 2021-22.

Timothy Liljegren and Alexander Kerfoot replied Toronto (47-20-6). Morgan Rielly chipped in with two assists to give him a career-high 53 on the year. Erik Kallgren stopped 23 shots.

Sabres defenceman Owen Power — the No. 1 pick at the 2021 draft — made his NHL debut after signing an entry-level contract last week. The six-foot-six Mississauga native spent two seasons with the Michigan Wolverines before turning pro following his school’s defeat in the NCAA’s Frozen Four tournament.

Matthews, who is in the process of rewriting the Leafs’ record book for goals in season, had found the back of the net 58 times coming into Tuesday but just once in three outings against the Sabres.

Buffalo beat Toronto in the teams’ two previous meetings, including a 5-2 victory outdoors at the Heritage Classic in Hamilton on March 13 — an encounter that saw Matthews subsequently suspended two games for a cross-check to the neck of Dahlin.

The 19-year-old got through that shift unscathed and then broke up a 2-on-1 later in the period with the teams playing 4 on 4 when Mark Giordano tried to find Matthews off the rush.

Okposo opened the scoring on a Buffalo power play at 7:25 of the first period when he took a pass from Victor Olofsson and beat Kallgren upstairs for his 19th.

Looking to become just the third NHLer to reach 60 goals since 1995-96, Matthews had a couple chances as the period wore on, but Anderson shut the door at every turn.

The Leafs made it 1-1 at 2:09 of the second when Liljegren pinched down to bank William Nylander’s end-boards rebound in off Anderson’s pad for his fourth.

Matthews was denied again by Anderson with the blocker moments later — he appeared to have some words with the veteran goaltender once play was whistled down — before Buffalo retook the lead on another man advantage.

Tuch made a nice move in the neutral zone to set up Thompson, who kicked the puck from his skate to his stick and fired past Kallgren for his team-leading 33rd at 9:11.

Toronto came close to tying it again, but Michael Bunting’s shot trickled through Anderson and off the post before the Sabres netminder desperately robbed Liljegren on the goal line.

Robbed by Kallgren’s glove in the first, Skinner went blocker at 4:09 of third to make it 3-1 off a pass from Tuch.

Dahlin then pushed the lead to 4-1 just 1:34 when Olofsson sold shot and found a wide-open Dahlin to bury his 10th with Kallgren out of position.

Kerfoot got one back for the Leafs at 8:50 when he delayed in front of Anderson before firing a shot that just dribbled over the line for his 13th.

Anderson kept the visitors up by two a couple minutes later with a great pad save on Ilya Mikheyev as Toronto started to push.

But Asplund scored his seventh with Kallgren on the bench for an extra attacker as the Sabres downed the Leafs a third straight time.