Rumors: Is Chapters Moving into Target in Square One? 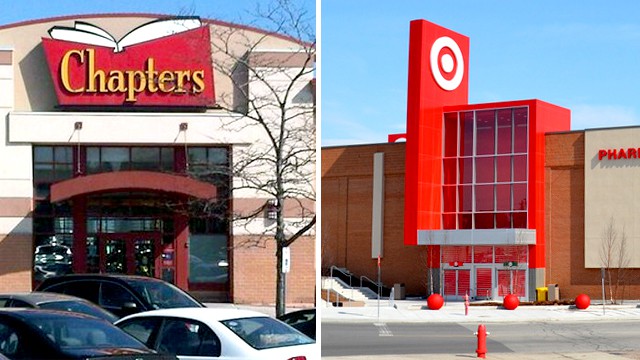 Here at insauga.com, we hear a lot of rumors — many of which concern empty commercial units.

Most recently, we’ve been hearing that the standalone Chapters across the street from Square One on Rathburn is going to be closing up shop within the next year or so and moving into the mall. Some people have even suggested it’s going to take up residence in the temporarily occupied Target location.

We didn’t think much of this rumor at first. Not because it seemed implausible (it didn’t and doesn’t), but because there’s nothing wrong with Chapters’ current location. It’s spacious, walkable and surrounded by ample parking (especially since the Sport Chek moved).

However, we recently learned that the Queensway Chapters is closing down and moving into Sherway Gardens. That made us wonder if the brand’s Square One location was going to be making a similar move. Indigo-Chapters locations seem to flourish inside malls and have become quite ubiquitous in luxury Ontario shopping centres. Both Yorkdale and the Eaton Centre boast interior Indigo locations and the stores seem to appeal to shoppers.

In fact, it’s great to be able to grab one of Heather’s Picks or some sexy new headphones while holiday shopping. No one likes to go outside. Sometimes not even in the summer.

This rumor was then augmented by another whispering in the grape vine — a whisper that Metrolinx was interested in expanding the Mississauga Transitway into Chapters’ (and Jack Astor’s and Scaddabush’s) neck of the woods.

With all the puzzle pieces seemingly coming together, we had to find out if there was any truth to the whispers.

We reached out to Square One first. We contacted Bunmi Adeoye, vice-president at the Toronto-based NKPR public relations firm that represents Square One.

“Oxford Properties will continue to redevelop the shopping centre, including its former Target store space, with details to follow,” Adeoye wrote in an email.

Hmmm. So it doesn’t look Square One is ready to talk about any permanent tenants at this juncture.

We also reached out to Metrolinx, who told us that the rumor we’ve been hearing is just that — a rumor.

“This is a rumor,” Kim Johnson, media relations & issues specialist, strategic communications with Metrolinx wrote in an email to insauga. “It is true that Metrolinx will be investigating service impacts to the GO Square One bus terminal in light of the Hurontario LRT project as well as projected growth in the area. Any potential changes required to the existing bus terminal or the Mississauga Transitway would result in discussions with the City of Mississauga.”

We also reached out to Indigo and are awaiting their take on the rumor.

So, it appears that there are no confirmed plans for the standalone Chapters to pack its bags and move across the street.

While things might change as the Square One area (and the mall itself) grows and develops over the next few years, we have to conclude that, at this point, the rumor that Chapters is going to move into the mall due to Transitway expansion is, like Johnson said, just a rumor.

That said, we do wish there was some truth to the talk. An interior Indigo would be a wonderful additional to the ever-growing, ever more chic mall.