Royals take Game 3 over Cardinals, teams back in Hamilton tonight for Game 4 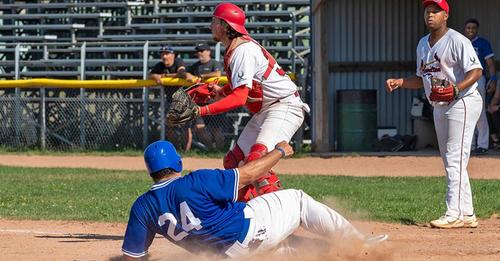 A stunning two-game winning start by the Hamilton Cardinals to open their playoffs against the Guelph Royals shocked most Intercounty Baseball League fans.

Despite the Royals finishing second with a sterling 31-11 regular season record for second place, jaws dropped when the Cardinals, just 12-30 during the season, stunned their Guelph counterparts by taking the first two games with 4-3 and 7-3 scores.

Last night (August 30), the Royals returned to rule the roost, hammering out a 16-8 win over Hamilton at David E. Hastings Stadium in Guelph.

However, the Cardinals battled back with seven runs of their own, including a three-run homer by Jeremie Veilleux who was two for three on the night with four RBI’s and a walk.

It was 12-8 going to the bottom of the eighth inning before the Royals put the game out of reach with four more runs, doubling up the Cardinals to the tune of 16-8.

Claudio Custodio collected the win with an unearned run over six innings on the mound while Michael Bonaccorso took the loss, allowing seven runs on seven hits over five innings.

Game Four of the Best of Five series takes place tonight (August 31) at 7:35 p.m. at Bernie Arbour Memorial Stadium in Hamilton where the Cardinals will get their second chance to end the series and advance to the second round.