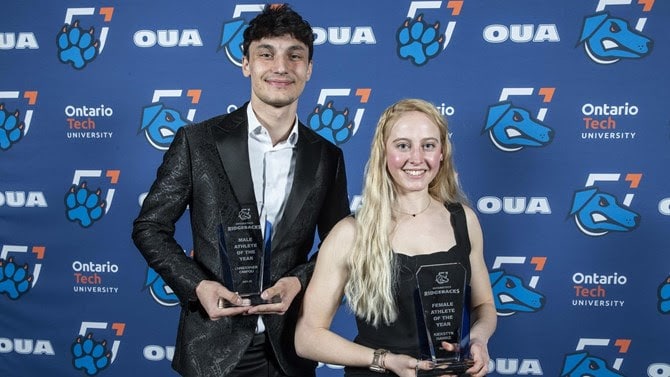 Hawke finished her five-year career as a Ridgeback by finishing third in the Canadian University Rowing Championships Lightweight B final and fifth in the open 1x B final. At the provincials Hawke captured gold in the B final and finished sixth overall in the women’s 1X. An OUA Athlete of the Week, Hawke also received both OUA and Ontario all-academic awards.

Coming off his second year as a Ridgeback, Campoli scored an impressive 12 goals in 10 matches in 2021-22, with back-to-back multi-goal games. After Campoli’s seven goal week, which helped the men’s soccer team secure a spot in the 2021 OUA playoffs, he was named Ontario Tech, OUA and U SPORTS athlete of the week. He was also drafted third overall in the 2022 CPL-U SPORTS draft by Halifax Wanderers FC.

From the women’s and men’s hockey teams Zoe McGee and Matthew earned freshman athletes of the year award.

Standing between the pipes, McGee appeared in eight games with two shutouts and a .941 conference save percentage, earning her an Ontario Tech athlete of the week honour.

Barron led the Ridgebacks men’s hockey program in scoring, contributing four goals and 13 assists in conference play, followed by a goal and two assists in the postseason. The forward from Yarmouth was named an OUA east division all-star, as well as the OUA’s all-rookie team.

Other major award winners included soccer players Ashlynne Koly and Nathaniel Sadler, who were named the Dr. Gary Polonsky Leadership Award recipients; and Russell Maharlika, who earned the Sase Narayan Unsung Hero Award. The award recognizes a student who has positively influenced a program or organization from behind the scenes with a positive attitude, a willingness to help in whatever capacity necessary, and a commitment to excellence.

For the first time, the Ridgeback alumni award of distinction was presented to former hockey player Jaclyn Gibson, who played with Ridgebacks from 2011-2014. The award is aimed to honour distinguished alumni who represented the heart, soul and spirit of the Ridgebacks throughout their varsity career and continue to do so in their professional career. The award recognizes one Ontario Tech graduate who was a varsity athlete that demonstrates proven leadership skills, exceptional achievements in business or industry and outstanding contributions to the community.

The Rob Millikin Award was awarded to Taylor Ruzgys (Women’s Rowing) for exemplifying academic success, passion and heart throughout the season.

Erin Ross (Women’s Hockey) and Kari Belec (Men’s Hockey) were the recipients of James-Baun Cup, which is presented to a student on the women’s and men’s hockey teams who show commitment, dedication, perseverance, academic responsibility, leadership and is a great teammate in the pursuit of excellence. The Cup is named after former NHL’er and Durham Region resident Bobby Baun and his long-time friend Don James.