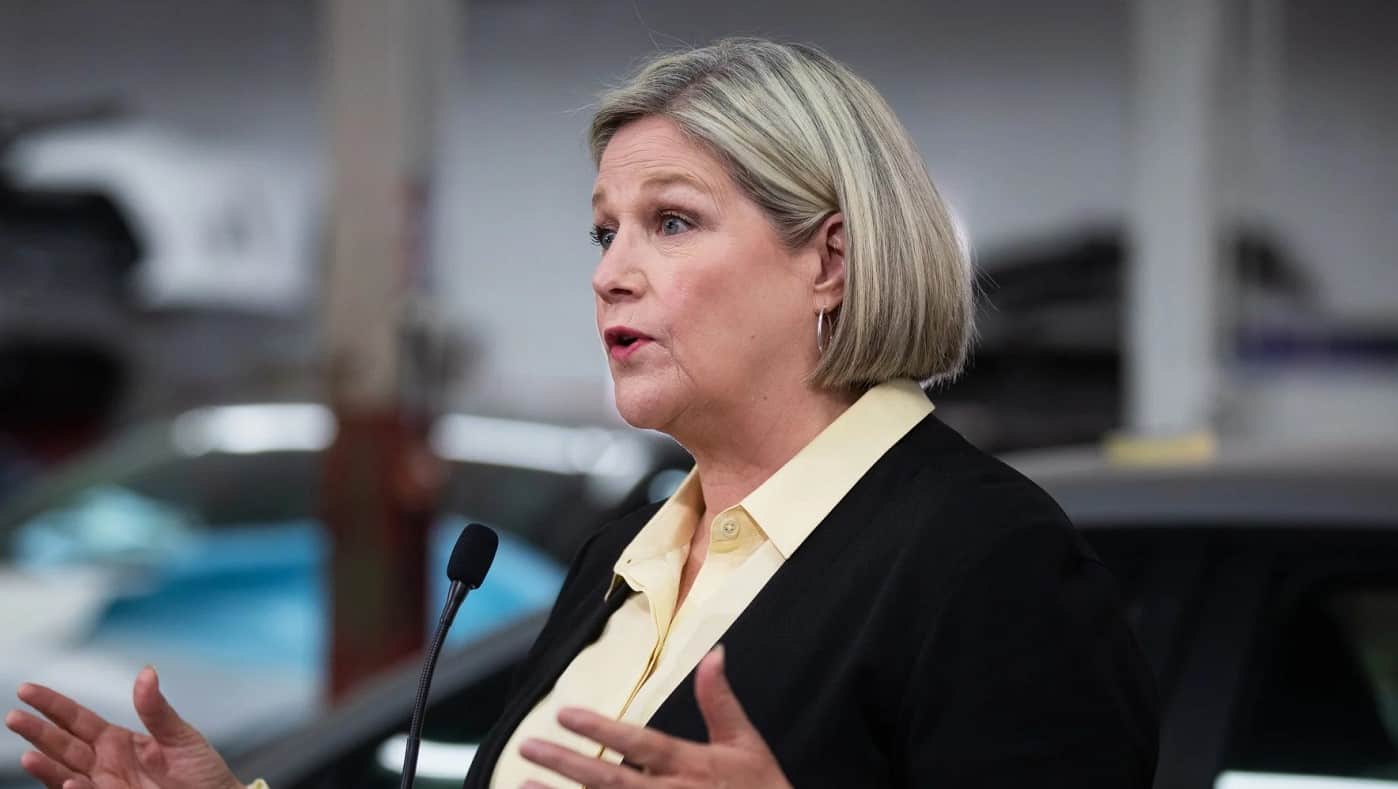 The elected leadership of Hamilton got a sense of the task at hand as new Mayor Andrea Horwath and most city councillors toured all 15 wards on Wednesday.

Historically, Hamilton city council has tended to be budget-conscious — and two weeks ago the now-seated council received an outline of a nearly 7-per-cent increase to the annual budget. Working to a perhaps more politically palatable  number while trying to improve roadways, mass transit and local protections of Greenbelt farmlands will be a balancing act for a council with 10 new arrivals.

The mayor, who has held office as a councillor or provincial politician for 25 years, said it was vital that city council tour together to find common ground.

“With two-thirds of the council being new, you don’t want to make assumptions about people’s understanding of the complexities of the issues in each ward, or of the diversity of the city,” said Horwath, who won the mayoralty by an 1,663-vote margin against challenger Keanin Loomis four weeks ago. “Today really was about acknowledging each other, recognizing what everyone sees as important, and being respectful. It gives us aa good base as we go into the tough conversations we’re going to have.

“It provides some depth to some of those priorities,” she added. “There are many and we have a limited capacity. I think it will help us with prioritization … today was important to create that sense of the bigger picture.”

General Issues Committee is on the road today, with Mayor Horwath and members of council visiting each ward with staff to understand needs and perspectives from every corner of #HamOnt pic.twitter.com/pv2mMETzcT

The city has a protracted infrastruture deficit. The short-term fiscal picture will also include adapting to the end of most COVID-19 pandemic relief from the two senior levels of government before revenue inflows — from Hamilton Street Railway (HSR) riders, or rec facility user fees and the like — recover to pre-pandemic levels. At the same time, councillors also have voters to keep happy.

“We got a chance to work on the common ground today,” Ward 13 (Dundas) Coun. Alex Wilson said. “I really appreciated taking the time to slow down, since I’m usually go-go-go with motions and proposals. We got see what the commonalities are across all the wards,”

A popular issue is roadways, regardless of how one divides their personal and work trips between the car, bicycle, or walking on sidewalks. As Horwath related it, the councillors on the trip got a reminder of why Barton St. was rated as be the worst in Ontario in a CAA survey.

“We had someone with us who was filming,” she said. “On Barton, many times he had to stabilize the phone as we went up and down.”

Wilson added that the excursion enabled councillors to also share how much they value the safety of all road users as a priority. There was movement in that direction over the last two council terms.

“Different councillors spoke really earnestly of specific instances of areas in their ward where pedestrian safety has been improved, or needs to be improved,” they said.

Like many cities that are on a major body of water, Hamilton has a contrast between industry and the natural landscape. The latter is comprised by the Niagara Escarpment, the waterfront and numerous waterfalls. The mayor said she hoped the tour opened councillors’ eyes to the opportunity to make sure there is equitable access to outdoor spaces.

“For example, along the Escarpment, we could try to have the same standard of access, beauty, usability,” Horwath said. “Instead of this being something that Coun. (Esther Pauls) in Ward 7 or Coun. (Mike) Spadafora in Ward 14 (also a Mountain ward) tries to do, it’s something everyone participates in. With a day like today, maybe you get picture of what that vision looks like, and maybe people won’t see it as a parochial effort but as a city-building exercise.”

Whether that leads to changes to HSR remains an open question. Hamilton is the only major Ontario city where property taxes are area-rated, with some wards having lower rates in exchange for different levels of city services. That has led to gaps in the HSR network. In the last term, though, at least one rural councillor — Judi Partridge in Ward 15 — said business owners in her ward were calling for more transit, in order to better accommodate employees.

“Some councillors described how they have some communities that don’t want transit,” Horwath said. “There were other instances where councillors describe that employers and workers find it difficult without transit infrastructure. I don’t think of it (the tour) so much as a decision point so much as we have highlighted some things that have been a great success and we need to build on those things.

“One of those things we can agree we are one city, and we have to make sure we are knitting together as one city,” Horwath said. “It’s been 22 years since we’ve been one city.”

‘The Greenbelt getting eaten into’

Bill 23, the controversial More Homes Built Faster bill that Premier Doug Ford and the PC Party of Ontario government might soon pass, was also a hot topic. The Association of Municipalities of Ontario said last week that the bill could stick property tax payers across Ontario with $5 billion in new taxes. Other GTHA centres such as Brampton, Mississauga and Oshawa have warned against the bill.

In addition to increased costs borne by cities and property owners, the Registered Nurses Association of Ontario has also warned that Bill 23 will affect air quality and food security in the Greater Golden Horseshoe area.

Hamilton also had province overrule the 2021 council decision to create a firm urban boundary. That move was in line with a push to build density in the sprawling city while being relatively environmental consciousness.

Wilson, who along with Ward 12 Coun. Craig Cassar is cofounder of the Save Our Streams Hamilton wetlands protection coalition, described Bill 23 as “forced urban boundary expansion.”

At least 11 of 15 Hamilton councillors seem resistant to the move by the province. They have either participated in anti-Bill 23 rallies, attended a climate strike, or spoken out against Bill 23 publicly (including through social media) over the past few weeks.

Horwath, appearing over a WebEx platform, held up a map showing the Greenbelt lands in Hamilton. The tour included venturing through spaces that would no longer be protected from being paved.

“In terms of the Greenbelt getting eaten into, it’s different when you feel it through driving along the roadways and lookoing at the farmland, or the environmental heritage, and the existing uses,” she said. “You get a sense of a scale and the impact those lands have that boxes on a map do not give you.”

Ward 9 Coun. Brad Clark was perhaps the first Hamilton politician to contend that Bill 23 will taking away local decision-making from cities and conservation authorities. Rural and suburban representatives such as Wilson, Cassar and Couns. Matt Francis (Ward 5), John-Paul Danko (8), Jeff Beattie (10), Mark Tadeson (11) and Ted McMeekin (15) have been public with their concerns about Bill 23. In the lower city, Couns. Maureen Wilson (1), Cameron Kroetsch (2) and Nrinder Nann (3) have also indicated opposition.

“When you go through the farmland and think of an entire area being changed for development, your thought as a councillor is ‘how do we service all that?’ ” Coun. Alex Wilson said. “And what is the huge cost of using that farmland? Doing so means carving out parts of our natural system, so seeing that today is valuable.”

Great comments from colleague and Ward 11 Cllr. @MarkTadeson “it just doesn’t make sense, there is no infrastructure to support the proposed growth here”. pic.twitter.com/dcyedeSFFZ

The Hamilton Spectator reported on Nov. 10 that the city faces a potential 6.9-per-cent budget increase. Typically, through a long process, city council and staff will come down from that initial quote.

Inflation in Canada was 6.9% at the end of last month. Since late 2021, as economies reopened following the easing of pandemic restrictions, the inflation rate has reached levels last seen in Canada during the early-1990s recession.