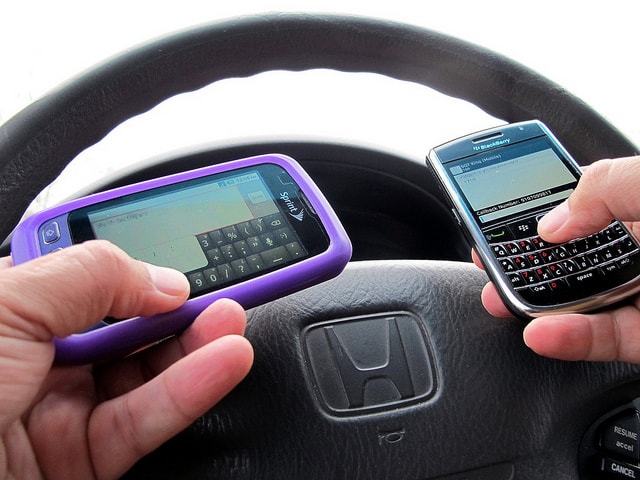 If you’re on the road often, you should read this—but not while driving.

May 16-22 is the 50th National Road Safety Week in Canada. One of the key issues in focus this year is distracted driving.

Unlike much of “legalese”, the term’s meaning is as simple as it sounds: driving while not paying attention to the road. Even reading a map or plugging a destination into your GPS is not a legal excuse.

According to Ontario government statistics, deaths from distracted driving have doubled since 2000. Distracted driving-related injuries happen at an average rate of one person every half-hour.

The non-profit Canadian Safety Council launched National Road Safety Week in 1968. It started out as a campaign relating to Victoria Day, due to a typical spike in aggressive driving behaviour around the long weekend, said CSC spokesperson Lewis Smith.

The CSC reports that texting while driving is a major factor in deaths and injuries on the roads. Texting drivers are 23 times more likely to be involved in a crash or near crash than non-distracted drivers.

About 25 per cent of collisions in 2013 were related to distracted driving.

Studies show Canadians recognize this as a problem, but don’t tend to recognize their own personal behaviour as part of it.

“I think a large portion of it is because people believe that they’re better multitaskers than they are,” Smith said. “They look at the statistics and they think, ‘That’s tragic and that’s completely avoidable, but that won’t happen to me.’”

Smith hopes the campaign will challenge this attitude.

“Even the world’s best multitasker is still paying less attention to the roads . . . If you’re putting more focus on the road, you’re making a stronger attempt at driving safer,” he said.

The public response to National Road Safety Week has been “fairly positive,” said Smith. Some, though, he says, are critical of what they perceive to be a lack of enforcement of safe driving laws.

“From our standpoint, the police across the country have been doing as good a job as they possibly can with this,” said Smith. “The issue is the police forces are limited and distracted driving is a very rampant issue.”

Law enforcement plays a critical role, but to have more effective enforcement, we need people to watch their own behaviour, he said.

“Before we can be enforcing with more severity and more regularity, we need to change the attitude to make it more taboo to be [driving while distracted] and to give the police forces more tools to properly enforce [the laws].”

In addition to immediate danger to oneself and others, the act of distracted driving in itself has legal consequences.

Drivers with A to G licences can face three demerit points as well as an out-of-court settlement fine of $490. If you receive a summons or fight the ticket in court and lose, the fine is $1,000.

New drivers with, for example, a G1 or G2 licence who are convicted of distracted driving don’t receive demerit points. Instead, they face a three-strike system. The first conviction results in a 30-day licence suspension. The second means a 90-day suspension. For a third and final strike, your licence is cancelled and you are removed from the Graduated Licencing System (GLS). If you do start driving again, you’ll have to restart the GLS.

The consequences are even more severe for careless driving or dangerous driving, when distracted driving leads to injury or death. They include bigger fines, more demerit points, a longer licence suspension and jail time.

The City of Mississauga has its own initiatives and individuals striving to make the roads safer.

One Mississaugan hoping to drive the message home is Ward 9 Councillor Pat Saito. She played the central role in bringing back the Road Safety Committee. Road Safety Mississauga will have a mandate “to review safe driving issues and make recommendations on ways to address aggressive driving and other unsafe driving and pedestrian behaviours.” According to the City of Mississauga website, “The committee is comprised of citizen members, Councillors and representatives from a wide cross-section of transportation, enforcement and safety agencies.”

Mississauga disbanded the committee in 2014, citing what the City said was a lack of quorum and redundant recommendations already being carried out by city staff. Saito moved a motion to reinstate the committee earlier this year and she says she’s excited to bring it back. The disbandment left other committees swamped with work and unused promotional materials, she told Mississauga News in March.

Before its disbandment, the committee had a plan to address distracted driving.

“We had a program that was shared across the city. Cards were in all vehicle licence offices and distributed at public events,” said Saito. “I do expect this will be a big focus of the committee and that we will work with Peel Police and other agencies on a comprehensive program to target distracted driving.”

Saito said a key concern will be safe driving near park areas often packed with children during weekdays.

Mayor Crombie cast the lone vote against Saito’s motion, saying the city could have merged all other traffic-related committees.

The returning committee won’t be working alone, Saito said. In addition to city communications staff, it will work with regional and provincial police as well as the Ministry of Transportation of Ontario. There will also be eight citizen members who may represent stakeholder groups for specific programs.

Saito expects the committee will be in place by September this year, with an established work plan including a safety education campaign for 2018. Recruitment of citizen members is one of the tasks to be completed before then.

The province offers several tips to avoid injury or death caused by distracted driving, such as leaving your phone off or on silent mode, having a passenger answer for you, or pulling over to a safe spot if you must take a call.

Whatever your strategy for avoiding distracted driving, the message from safety advocates, the province, and the City of Mississauga is clear: don’t do it.

That’s what Nancy Murray, who lives in Erin Mills, tells her daughters.

“As parents we point out the dangers and will require a no-excuse policy for our fifteen-year-old daughter, Erin, while behind the wheel. For our older daughter Kristy, we had the same rule when she was underage, but now as an adult she self-governs.”

Murray is not optimistic about everyone’s ability to self-regulate in this way.

“In light of all the evidence showing how catastrophic the outcome can be, I think some kind of technology should be developed and placed in cars to make cell phones inoperable while the vehicle is running.”

For its part, CSC wants to raise awareness of how widespread the issue is and to keep the conversation going. They encourage everyone to share their thoughts or stories about distracted driving with @CanadaSafetyCSC using the hashtag #CanYouSeeThem.