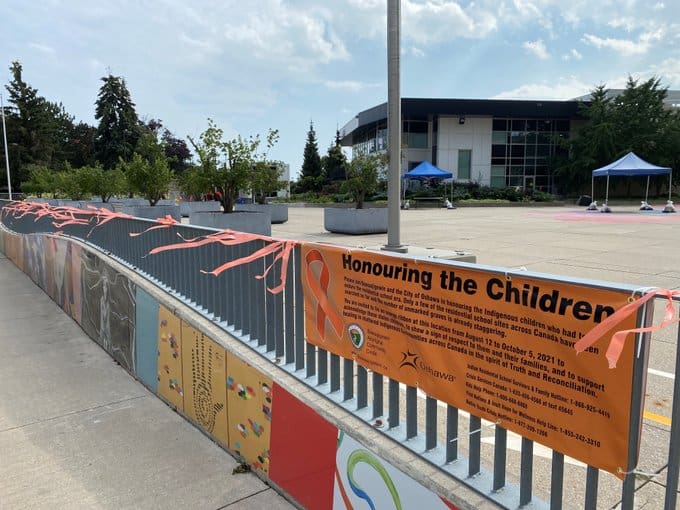 The ceremony included a blessing and smudging ceremony by Dr. Shirley Williams, Elder and residential school survivor and a welcome by Mayor Dan Carter, as well as a drum song and call to action by Mary George, President of Bawaajigewin Aboriginal Community Circle.

Following the ceremony, Indigenous and non-Indigenous community members were invited to tie orange ribbons along the railing on Centre Street at Civic Square, on the east side of City Hall.

These actions were to acknowledge the stolen children, to show a sign of respect to them and their families, and to support healing in shattered Indigenous Communities across Canada in the spirit of Truth and Reconciliation. Community members are invited to come to City Hall (50 Centre St. S.) to bring and tie an orange ribbon on the railing to honour the children until October 5. The ribbons will eventually be braided together by Bawaajigewin Aboriginal Community Circle and displayed at a future date.

“The City of Oshawa is honoured to stand with Indigenous Peoples of Oshawa and across Canada to honour the stolen children of the residential schools and the unmarked graves which were recently uncovered in many locations across Canada,” said Oshawa Mayor Dan Carter.