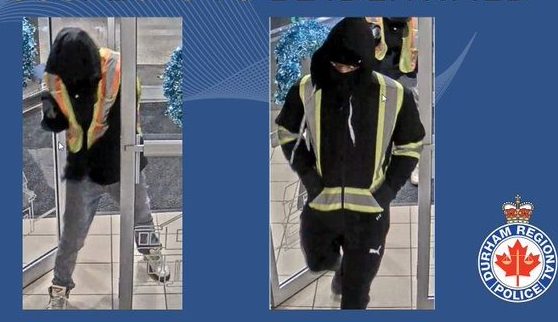 Durham Police have released a surveillance photo of two suspects believed to be responsible for an armed robbery in Pickering in early December.

West Division officers responded to an armed robbery at the Meridian Credit Union on Kingston Road on Wednesday December 8 at approximately 7 p.m. Two men, both armed with handguns, entered the bank and made a demand for cash from the employees. The suspects then forced the employees into the vault and took a quantity of cash before fleeing the scene.

Meridian Credit Union is now offering a $15,000 reward to anyone who provides any information that leads to the arrest of the two suspects involved.  Meridian advised this is another step taken to help protect its employees and its members.

Anyone with surveillance or dashcam video in the area at the time of the incident, or anyone with new information about this investigation is asked to contact the Major Crime Robbery Unit at 1-888-579-1520 ext. 5355.