Editor’s Note: New reports indicate that some banks are sending legitimate forms to some clients to fill out to confirm information for the CRA. If you receive a letter that looks suspicious, call or visit your bank to confirm its validity before filling it out and returning it.

When it comes to residents being scammed, that's becoming a disturbing trend as of late.

One helpful tip from the past was—when it comes to someone on the phone saying they're from the Canada Revenue Agency (CRA)—it’s easy to spot the scam because the CRA would never ask for personal information over the phone.

Well, now there's a new method of scamming people that is not over the telephone, further confusing the public as to its authenticity. This was recently posted on Facebook by an Alberta resident named Val Kosik. 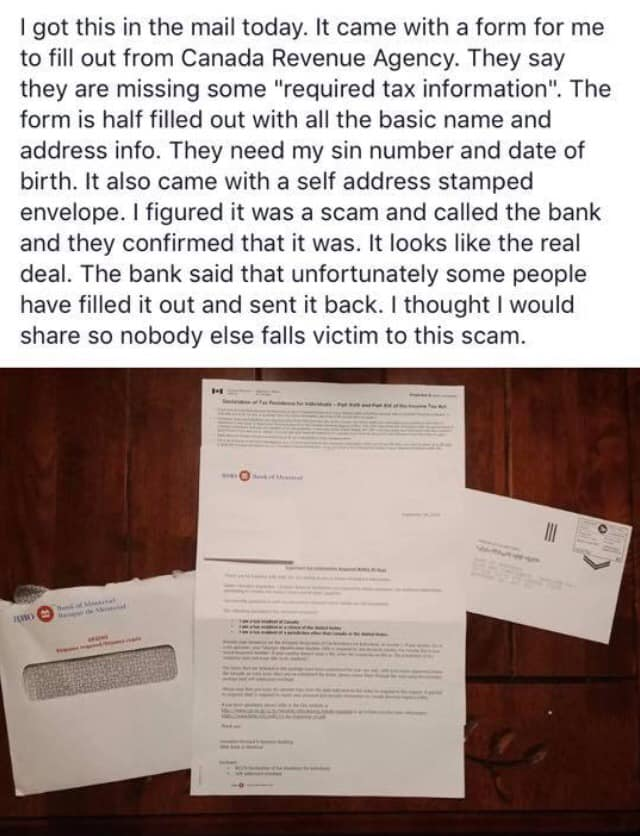 The letter that came to the mail apparently looked like it was from the Bank of Montreal and said "required tax information" was missing and that the CRA needed their SIN number and date of birth.

Kosik added that the letter came in what appeared to be a genuine bank envelope, and that she called BMO who confirmed it was a scam and, unfortunately, some people have complied with the instructions and sent their information.

Our previous piece on various scams advises that if you receive a fraudulent communication by email, phone, text, mail, from someone that claims to be the CRA and they request personal information, the best reaction is to never respond

These scammers may insist that this personal information is needed so that the taxpayer can receive a refund or a benefit payment. Cases of fraudulent communication could also involve threatening or coercive language to scare individuals into paying fictitious debt to the CRA.

You should ask yourself:

If you suspect you may be the victim of fraud or have been tricked into giving personal or financial information, contact your local OPP detachment at 1-888-310-1122 or the Canadian Anti-Fraud Centre at 1-888-495-8501.

5 unbuilt projects that could have changed...
Top 5 Chicken on the Rocks in Mississauga
Five fun things to do this weekend that are...
Top 5 chicken sandwiches in Mississauga
5 fun ways to make the most out of your...
END_OF_DOCUMENT_TOKEN_TO_BE_REPLACED