There was an announcement earlier this year regarding the future plans of Pearson International Airport, with Greater Toronto Airport Authority (GTAA) President and CEO Howard Eng outlining a bold, somewhat grandiose, vision of converting one of the largest and busiest airports in North America into a “Union Station West”–essentially another Union Station that provides completely integrated transit services to bolster the airport into a regional hub for the Greater Toronto Area.

But while the growth of Pearson International Airport has provided enormous economic benefits, there are lingering problems. Suffice it to say, the GTAA is a huge and complex organization that the general public knows rather little about. Their representatives may be present in numerous photo ops with various members of all three levels of government, but below the surface there are examples that its authority can supersede that of local municipalities on various issues.

Issues such as noise pollution, night flights and the need for the GTAA to be a more open and transparent organization were on display last week at a public workshop they hosted at the Living Arts Centre. The workshop was rather sparsely attended, with only about half the theatre being filled. I think one factor that played into that result was the almost last minute notification about the Mississauga meeting.

Also, before the beginning of the breakout group sessions, one of the residents complained that the slideshow presented at the Living Arts Centre was not the same one presented in Brampton. Peter MacLeod, the GTAA moderator for the event, assured that this was just because some minor tweaks were made to the Mississauga slideshow to plug in updated information after the Brampton meeting took place.

Here are some of those slides from the Mississauga presentation: 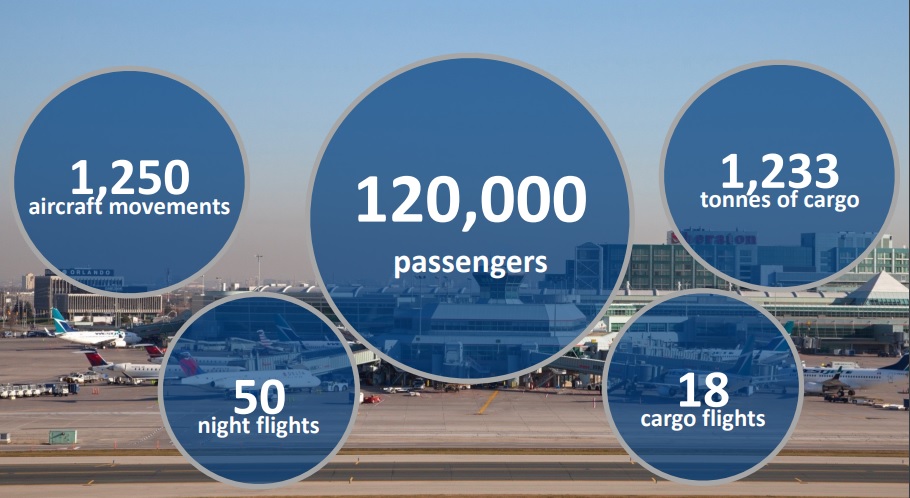 The standard graphics that the GTAA puts out to show how important they are to the Greater Toronto Area’s economy and mobility. This is an average day at Pearson International. 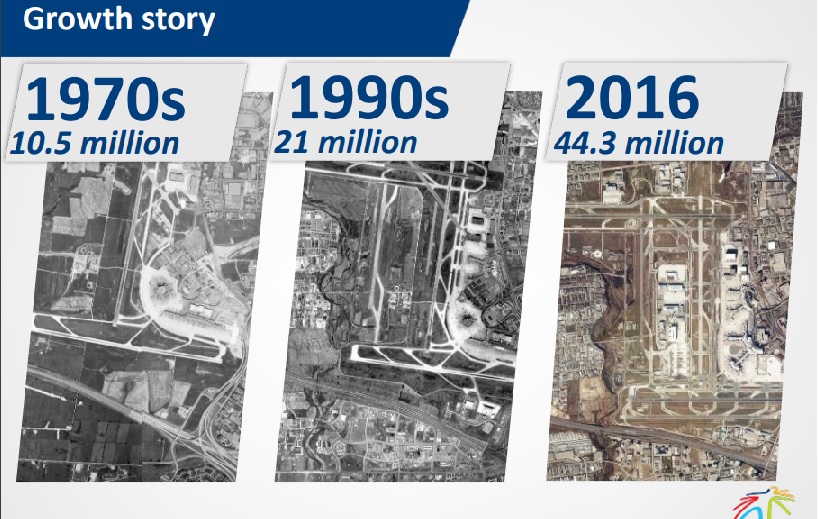 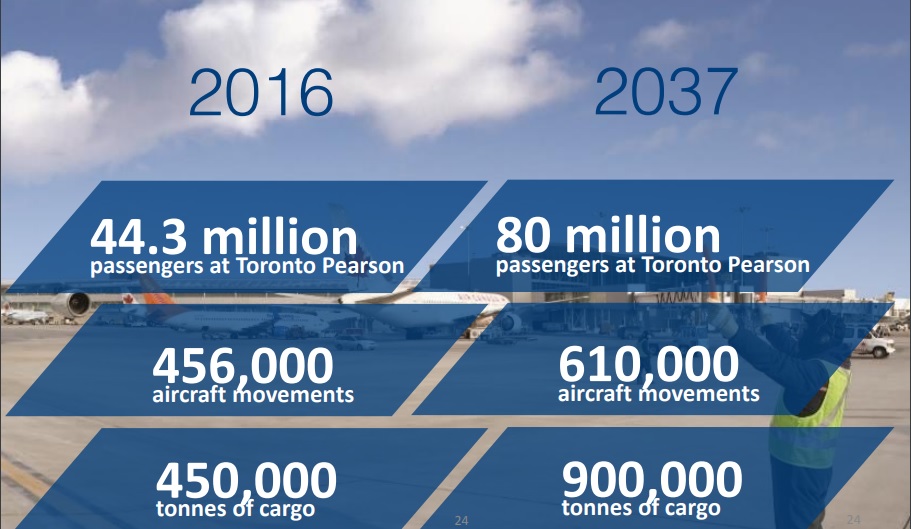 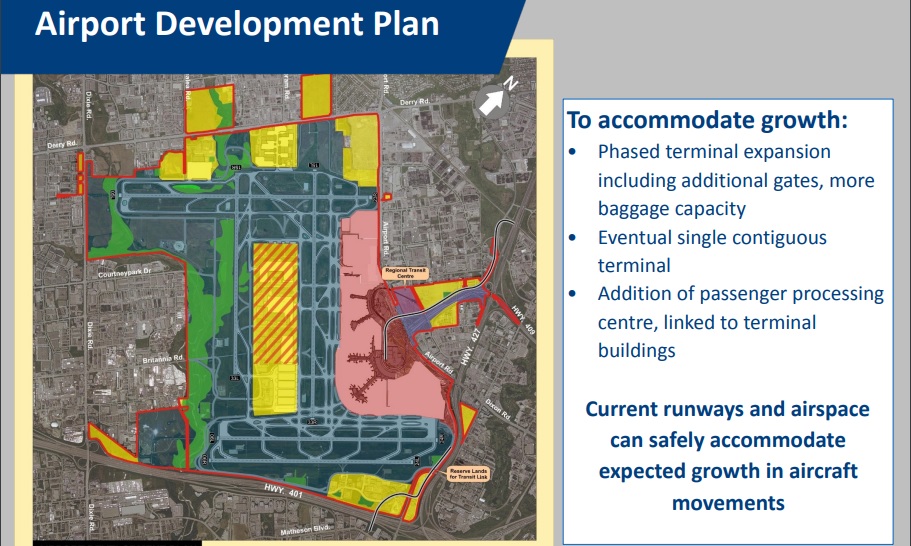 The GTAA outlined their development plan in order to accommodate this growth: 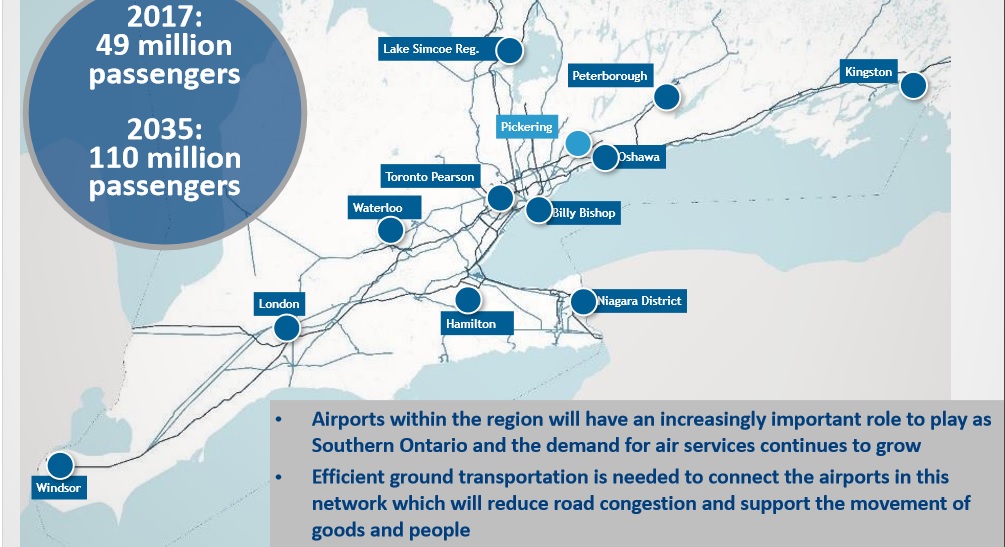 This graphic shows the various smaller regional airports spread out across Southern Ontario. Some in the audience suggested that a solution would be to divert more cargo flights to the smaller airports around the GTA, thereby freeing up Pearson’s capacity to take on additional passenger flights. So if you take an airport like John C. Munro at Hamilton and put more cargo flights there, they would likely not be disturbing anyone since most of the surrounding area at the airport in Hamilton is, after all, empty farmland. That’s one good idea at least.

The Mississauga workshop was also attended by federal Member of Parliament Peter Fonseca (Mississauga East-Cooksville) and Ward 3 City Councillor Chris Fonseca. Mr. Fonseca was not shy about expressing his frustrations over the conduct of the GTAA when it came to being open and transparent about their plans. Fonseca was not against the growth of the airport, but feels that there is currently an imbalance and that the welfare of residents is being pushed aside.

Mr. Fonseca also brought up certain matters regarding the way the GTAA operates that contributes to the notion some people have about how this non profit organization, established in 1996 to run Pearson International, has in some ways operated like a shadow government. Here are three specific examples assertion:

Residents themselves expressed various opinions on how to improve things at the airport, but one that stood out was their call to the GTAA to ban the practice of ‘noise sharing’. As this primer in Sydney, Australia explains, the practice involves diverting a number of flights across different flight paths in order to spread the noise they generate. Now it’s one thing if you’re talking about insurance; a pool of premiums paid by policyholders is there to pay for unexpected losses, essentially spreading out the costs. But that’s a monetary issue; airplane noise on a consistent, or occasionally unexpected, basis would be annoying enough for just one neighbourhood. But to spread the problem to other people in the area? No wonder people wanted to ban this practice. It just sounds like it’s making the problem worse.

Residents also called for a ban on some night flights, taking place in the wee hours of the morning when most people should be sound asleep. Mr. Fonseca suggested the GTAA should look at airports like Frankfurt which ban the practice, as well as technology that would retrofit airplanes to lower decibels. We’re in 2017 and the aviation industry hasn’t figured out how to come up with a plane that, at the very least, can function without making noise that would not be heard by human ears to an uncomfortable degree?

The GTAA may have announced they are looking at best practices from airports around the world, but Mr. Fonseca hopes that they don’t cherry pick the ones that look favourable for them, and in the interest of openness, transparency and accountability the GTAA should release all the options that were studied, whether they were ones that favoured them or not.

Mr. Fonseca and some of his fellow federal MPs recently held a town hall meeting in Etobicoke to hear residents’ concerns over the issue of night flights and matters pertaining to the GTAA. This was a separate event from the GTAA’s public engagement, and Mr. Fonseca said he and his colleagues were able to draw hundreds of people to their event, whereas the GTAA’s event seemed sparsely attended. Mr. Fonseca even offered to assume the responsibility of organizing public meetings about the Pearson expansion, since in his mind they could do a better job in notifying the public and getting the attendance so the GTAA representatives could hear from enough people about what they think of their initiatives.

The final concern was that this whole process was more show than substance, as some residents expressed that the GTAA was just doing this to simply clamp down on a potential public relations nightmare. MacLeod from the GTAA assured the audience that they did not ask a few dozen people to give up four of their Saturdays to serve on the GTAA’s Residents Reference Panel only to dismiss their recommendations in the end. Even though the GTAA is running a business and the bottom line is important, ensuring they respond to the public’s concerns with some concrete actions that they could implement right away is also good for the bottom line.

For their sake they should hope that this process helps alleviate people’s concerns. In September, the GTAA is set to release their Noise Management Benchmarking and Best Practices study, but in the meantime any information that they’ve gathered should be made transparent to everybody and the process should be completely open so the public knows exactly what is happening with Pearson International Airport for the foreseeable future.