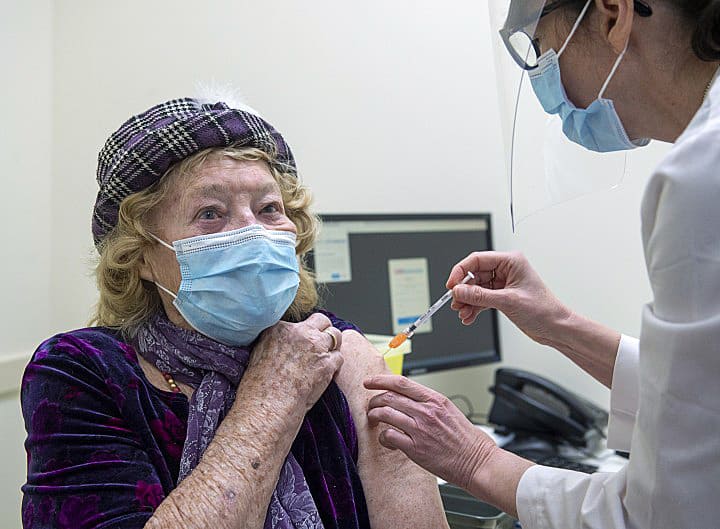 More questions are being raised about how long second shots of the COVID-19 vaccine can be delayed for seniors and other immunocompromised people.

The federal body that advises how vaccines be deployed said Thursday it’s reviewing a Vancouver study that found long-term care residents had a weaker immune response to their first dose than healthy adults.

After supplies slowed to a trickle earlier this year, the National Advisory Committee on Immunization said provinces and territories can delay second doses by as long as four months.

That’s instead of recommended schedule of spacing out the two-dose Pfizer-BioNTech and Moderna vaccines by three to four weeks, and the AstraZeneca product by four to 12 weeks.

Committee chair Dr. Caroline Quach said Thursday that NACI is looking at the Vancouver research, which found a weaker antibody response among older recipients but did not measure whether seniors were more likely to fall sick or die.

She said the findings will be assessed along with data from Quebec and the United Kingdom.

“What is so difficult with this disease is that there is no correlate of protection. That means that the presence and quantity of antibody present does not mean protection, or lack thereof,” Quach said in an email to The Canadian Press.

“Based on all those data, NACI will see if exceptions to the extended interval are necessary, keeping in mind that we are managing risk at a population level: the more people are vaccinated, the more likely we are to stop transmission, which will also be protective for the most vulnerable who may not mount an optimal response.”

The Vancouver data, funded by the COVID-19 Immunity Task Force, has yet to be peer-reviewed but adds to concerns about the rollout strategy of provinces including Ontario, Manitoba, Saskatchewan, Alberta, and British Columbia.

“The immune response is so complicated and we still don’t fully understand what are called the correlates of protection,” Evans said from Montreal, where he is director and associate dean of the school of population and global health at McGill University.

“The most important takeaway from this study is we have to be very vigilant in monitoring the followup for the elderly, or immunocompromised with respect to extending the vaccine dose beyond what’s recommended.”

Evans stressed that older people in both long-term care and the community are well-protected for many weeks by a single dose of an mRNA vaccine, but said there may be limits to how long some people should wait for their second dose.

He said COVID-19 vaccines have already been associated with dropping hospitalizations and deaths in Canada, but expected NACI may have to refine its advice for how they be used in various populations.

“We’ve got multiple vaccines, they all work a little bit differently and so we know that we don’t have a one-size-fits-all approach,” he said, adding that long-term care residents may be more vulnerable than seniors in the community.

Earlier Thursday, Health Canada’s chief medical adviser Dr. Supriya Sharma noted her agency – a separate body from NACI – approved the vaccines for use according to their respective labels.

“I think it does make sense that we potentially have a more nuanced recommendation around that delayed second dose, but those conversations are ongoing,” Sharma said.