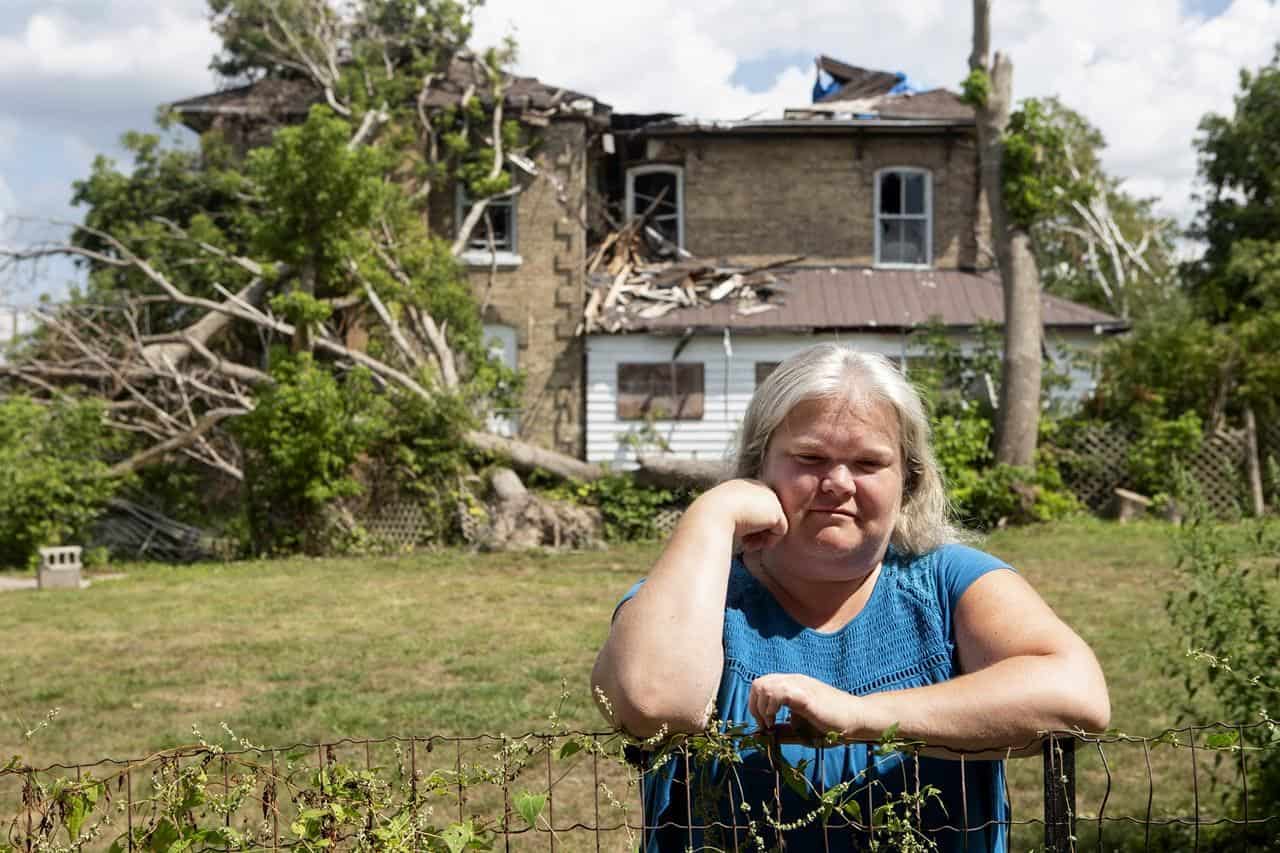 Blue tarps colour the rooftops and wooden boards cover up shattered windows in Uxbridge, three months after a devastating tornado ripped through the town.

Mangled trees and torn-up houses surround one of the town’s few multi-unit apartment buildings, which is still missing a roof after it was torn off in the storm. Tenants haven’t been able to return home, as contractors work to make the space livable again — but on a recent sunny weekday, some of the building’s former residents weren’t far from the site.

Carol West works across the street from the building, as a cleaner at the train station that was also badly damaged in the May 21 storm. She’s been keeping her work supplies — and some other possessions — in the back of her vehicle because she and her partner are still living in a hotel while they search for an affordable rental unit.

The couple are on a tight timeline, with a Sept. 1 move-out date for the hotel in Oshawa, and no place lined up to move into as of last Thursday.

“We’ve been looking and looking for months and months,” West, 60, said from a picnic bench across the street from the home she’d lived in for four years. Apartments she’s viewed are either out of her price range, inaccessible, or not in good condition, she said. “I’m starting to get depressed.”

Several of the couple’s neighbours in the building have also found themselves priced out of the town’s tight rental market as they wait for their former home to be repaired.

Tenants in about 40 units were displaced after the storm hit, said Uxbridge Mayor Dave Barton. Affordable and available rental housing was already in limited supply in town, as it is in many communities across Ontario.

But the storm, which prompted a local state of emergency in Uxbridge and other communities in the Greater Toronto Area, brought the issue to a head, Barton said, because the tornado’s path carried it through three of the only multi-residential buildings in town.

“It made it almost impossible to find housing within the township of Uxbridge,” Barton said. “We’ve had a significant number of people that have had to move outside of town.”

Some tenants have been staying with family and friends in the area. Others who couldn’t find accommodations, like West and her partner, were moved into hotels, and then placed in student residence apartments at Durham College in Oshawa. But they’ve been moving out in recent weeks to make room for college students who are due to arrive for the school year.

Amanda Shier, another tenant in the damaged King Street apartment, moved with her family out of the Durham College residences in July. The closest affordable place Shier could find was in the small farming community of Zephyr, Ont., a 20-minute drive outside the town where they had built their lives.

“It’s really hard to be displaced from that,” she said “We really tried when we got a new rental to at least be in town, and that didn’t work out.”

The move has meant a big adjustment for Shier’s nine-year-old son, who attends school and other activities like swimming lessons and karate in Uxbridge, and for Shier herself, who still works at a daycare in Uxbridge and finds herself driving past her old home each day.

Now that the initial stress of searching for accommodations is over, Shier’s family is sorting out logistics like longer commutes into Uxbridge for work and getting their son bussed to school in September.

“It’s really overwhelming to think of what’s going to come next and how long this is going to be,” Shier said. “Even though we have a place to live, it’s not settled.”

Barton, the mayor, said property owners have also faced delays from understaffed contractors as the cleanup slowly continues, though there’s a tight timeline on getting things like roofs fixed as wet winter weather approaches.

The May 2022 natural disaster that swept across southern Ontario and Quebec left at least 11 people dead and downed trees and power lines in its wake, along with extensive damage to buildings.

The tornado that hit Uxbridge was embedded in a derecho, a windstorm associated with a line of thunderstorms. Such events are considered uncommon in Canada but experts have said they may become more frequent in the years to come as climate change drives temperatures higher.

Barton said the town had been preparing for more severe, climate change-fuelled events with a recent culvert project that pulled the downtown out of a flood plain. It helped avoid severe flooding during the May storm, Barton said, but “didn’t help us with the wind, unfortunately.”

In the long term, Barton said the town is also looking to work on the housing shortage by encouraging more development downtown that would include rental accommodations, though he notes that those projects will take some time.

Solutions to the affordable housing crunch are also part of the rebuilding plan for Trinity United Church in Uxbridge.

The building is still roped off due to roof and other damage caused by the tornado, and a sign with information about the last Sunday service before the storm hangs on its hinges. Despite the damage, a newer sign on the fence outside the building asks people to “have faith,” and offers this promise: “We’ll be back in one form or another to resume our role in the community.”

Insurance coverage will fall significantly short of the money needed to fully rebuild the historic building as it was, said treasurer and trustee chairman Ted Meyers. With that in mind, the church is now leaning towards a complete teardown and rebuild that will reimagine the space to better fit the shifting needs of the church and its community.

Meyers said the vision includes a much smaller worship space for the shrinking congregation, community facilities and another structure that will hopefully hold between 100 and 120 affordable rental units.

It’s a plan the church had been mulling for a while and has been forced to look at with more urgency since the tornado, he said.

“We will now be able to focus more on what can the church do for the community, and make the community a better space for everybody,” Meyers said.

“Maybe this was a blessing.”