Rental prices up since last year in Mississauga

Although the COVID-19 pandemic has had a profound impact on the rental market and has made it a little easier for tenants to find more affordable accommodations, units are still quite pricy in Mississauga.

According to the recently-released GTA Rent Report, penned by TorontoRentals.com and Bullpen Research & Consulting, Mississauga has seen price growth in the market, with rental condo rates (by square foot) up 5.5 per cent and rental apartments up 11.7 per cent year-over-year. 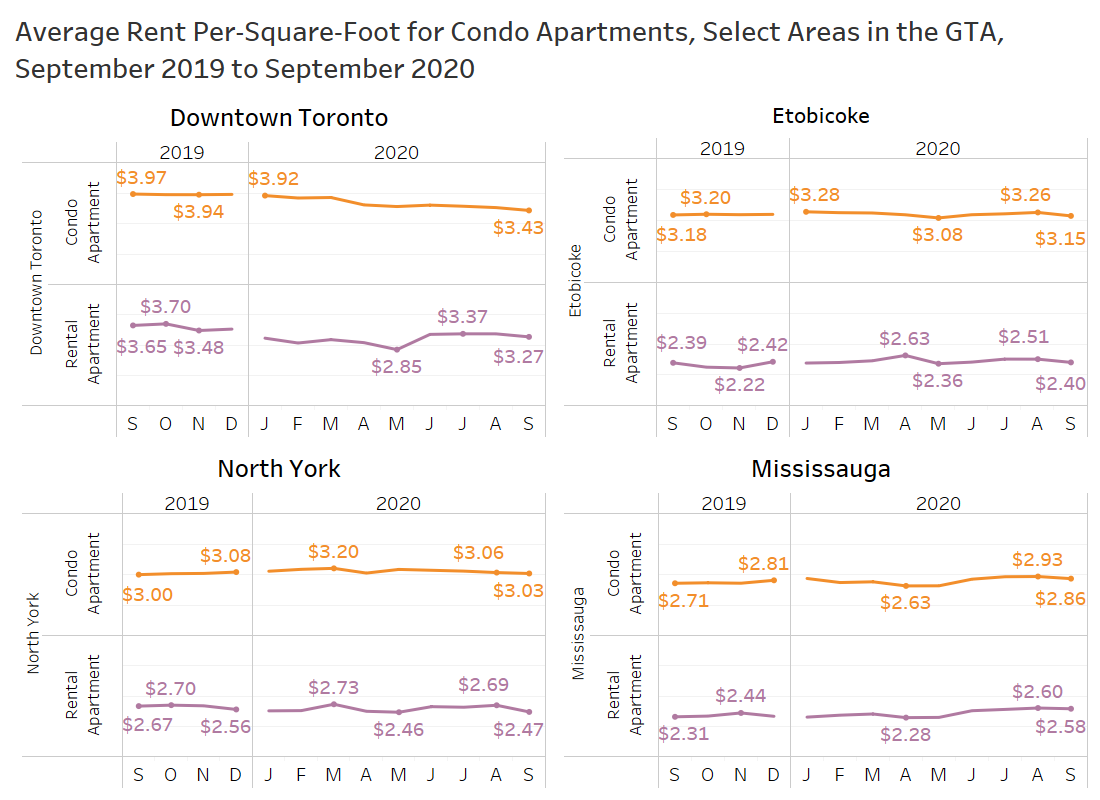 But while prices are still high,  GTA tenants are getting a little bit of a break. According to the GTA Rent Report, the average monthly rent in the Greater Toronto Area (GTA) was down almost 13 per cent year over year in September to $2,131, declining for the tenth straight month.

The report says that when controlling for bedroom types, one-bedroom suites are down 11 per cent and two-bedroom units are down 9 per cent in the GTA. Average monthly asking rents for condo apartments in the GTA in September ($2,199) were about $370 or 14.5 per cent lower than in September of last year ($2,571).

As for what's driving rates down in Toronto in particular, the adverse effect the pandemic has had on tourism, immigration and international study is ensuring that more condos and apartments sit empty. The report also says prices are dropping due to the new the work-from-home phenomenon and some urban residents’ desire to find more square footage at a lower price in outlying areas.

As far as those outlying areas go, they're getting a little bit pricier, but they're still more affordable than Mississauga.

“Many younger tenants in the GTA are leaving the region, even if it is only temporarily, to take advantage of much less expensive rent levels in other cities in Ontario,” Ben Myers, president of Bullpen Research & Consulting, said in the report.

“The average rental rate for a 1,000-square-foot condo in Kitchener is up 34 per cent annually, but is still cheaper than a 500-square-foot unit in Mississauga, Etobicoke, North York or Toronto."

Tenants might also be happy to hear that, along with lower prices, there are other perks to renting. The report says owners of recently completed high-end apartments are offering significant discounts or incentives, such as two months free rent.

The report says the average level of rental apartments under construction in 2020 is higher than any time over the last 30 years, which means that more inventory—and potentially lower prices—are on route. The 10,408 units of rental apartments under construction in September is down slightly from last month’s figure, but up 35 per cent annually per data from Canada Mortgage Housing Corporation.

The Toronto and GTA rent report takes a deeper dive into analyzing monthly, quarterly and annual rates and trends in the Toronto and the GTA rental markets.