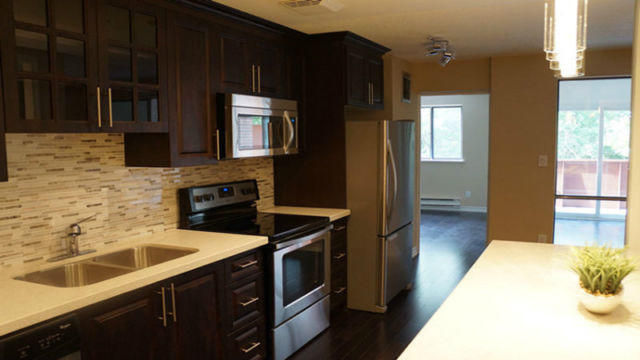 If you’re having trouble finding an affordable rental apartment in Mississauga, you are not alone.

According to data recently released by Urbanation, a firm that studies and collects information on the Toronto and GTA condo markets, condo rents in the GTA are up an annualized nine per cent while inventory has fallen to a five-year-low.

Right now, rental suites in the 905 (and that, obviously, includes Mississauga) are running tenants an average of $1,749 a month–a seven per cent increase over last year.

Although the increased prices make sense in a market where demand is high and supply is low, escalating rental costs and lack of available units are a serious hardship that the city is working to address.

According to a recent Housing Gap Assessment and Municipal Best Practices report, vacancy rates in the city are low. At present, the vacancy rate is 1.6 per cent (an ideal one is three per cent).

Mississauga is also hurting for new affordable rental housing. In fact, a brand new Daniel’s development in Erin Mills is the first rental-only building in two decades and it’s a luxury property that boasts top-notch amenities. So while it’s certainly good for tenants looking for long-term leases, it’s may not be ideal for a low-income family or individual.

In terms of inventory for residents with tighter budgets, there are currently 35,218 units available for rent for lower-income earners.

According to Urbanation, the number of condo apartments rented through the MLS system  during the third quarter of this year in the GTA declined by nine per cent to 7,651 units. The decline is caused by a 13 per cent drop in rental listings (units are few and far between). According to the report, the ratio of leases-to-listings hit a new high of 89 per cent while available listings at the end of the quarter fell to 930 units. 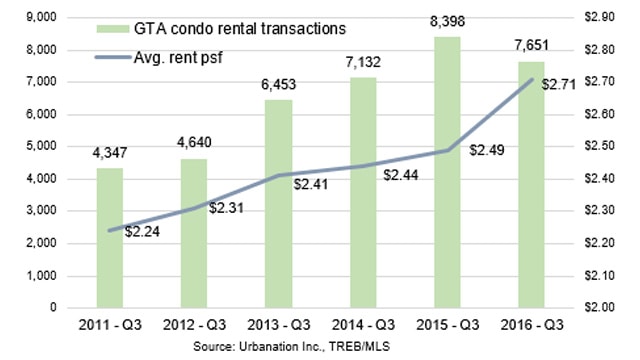 The report also noted that rental supply is shrinking because developers are launching fewer projects (perhaps because they’ve been hearing too many screams of “NO MORE CONDOS!!!!!!!” from NIMBY residents and real-estate doomsdayers who are warning of an over-saturated condo market?).

Although there’s been a lot of talk about bidding wars regarding houses, people have had to compete fiercely for apartments in Toronto, Mississauga and other GTA cities. According to Urbanation, the average condo rental unit spent only 12 days on the market in the third quarter and the number of units that rented for more than asking price more than doubled compared to last year.

While the situation isn’t ideal, experts expect it might get worse–especially when new mortgage rules come into play.

“The rental market has become severely undersupplied, which is likely to worsen following the latest round of mortgage insurance rule changes” said Shaun Hildebrand, Urbanation’s Senior Vice President. “Notably higher qualification standards for first-time buyers and reduced credit availability for investors should put even more pressure on the market, even as more rental units are being built” added Hildebrand.

In an attempt to manage Canadians’ escalating housing debt, federal Finance Minister Bill Morneau recently announced that measures would be put in place to “reinforce the Canadian housing finance system, to help protect the long-term financial security of borrowers and all Canadians, and to improve tax fairness for Canadian homeowners.”

Starting on Oct. 17, all new mortgage borrowers with down payments of less than 20 per cent who are seeking mortgage insurance will be required to qualify at the posted rate (currently 4.64 per cent, according to RBC) for a five-year mortgage, or the contract rate (whichever is higher).

Urbanation’s Hildebrand told The Globe and Mail that he estimates that the average buyer will need to make $86,000 a year to afford a condo under the stricter regulations. With the housing market more difficult to access, more prospective buyers will, Hildebrand suggests, choose to rent instead, further increasing demand.

In terms of Mississauga, the low inventory and high prices are problematic in a city where hidden poverty and overt affordability issues are common. According to a recent city report, 74,575 Mississauga households fall within the low-income bracket, bringing in less than $55,500 a year.

For lower-income earners, an affordable house should cost $1,390 or less to rent.

Fortunately, the city is taking steps to ensure more affordable units are created and that current rental stock is protected.

The city has also moved to regulate more basement suites. These units are typically much cheaper than condos, but are often unregulated because they’re basements or rooms in a homeowner’s private dwelling. Back in June, the city announced that it would make it less costly for homeowners to register secondary units, which will (ideally, at least) increase the supply of regulated affordable housing in Mississauga.

With Mississauga’s housing market continuing to soar, it will be interesting (and perhaps troubling) to see its impact on rental supply and costs.