‘Good as new’ is usually just sales talk for ‘close enough’ but when it comes to nuclear reactors you hope Ontario Power Generation mean exactly what they say.

As part of a 10-year $12.8 billion refurbishment project of Darlington Nuclear Station’s four units, OPG is claiming the reactor core of Unit 3 has been rebuilt just like when it came out of the box.

“After precisely installing thousands of new components, the Darlington Unit 3 reactor core has been rebuilt to ‘as-new’ condition, like when it was delivered to the station during construction and later commissioned for service in 1993.”

Dr. Chris Keefer, the President of Canadians for Nuclear Energy, said the work at Darlington is more evidence that Queen’s Park should remove the death sentence from the Pickering Nuclear Station and allow for its refurbishment as well.

“If we can refurbish to ‘as new’ we are in a great position to build new CANDU! But first let’s get Pickering refurbished too.”

OPG has passed the halfway point in the project, which began in 2016, and after completing the work on Unit 2 in 2020 a month ahead of schedule and on budget, now have two units – Units 1 & 3 – shut down at the same time (for the first time) for refurbishment.

Doing both at the same time, according to OPG, ensures critical resources such as skilled trades, technical staff and project managers, will be available to complete the work on both units in an “efficient” manner.

Unit 4 is expected to get the refurbishment treatment starting in early 2024 with completion expected by the end of 2026.

A look at the refurbishment process:

Power down and disassembly 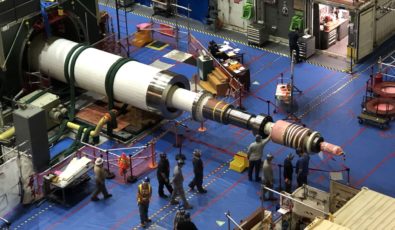 Darlington Nuclear’s Unit 3 turbine generator was successfully overhauled in August as part of the refurbishment project.

Power Up and assembly

Before disassembling a CANDU reactor, workers must disconnect it from the power grid. But shutting down the unit is not just a matter of pulling a plug. Workers must remove fuel and heavy water and isolate the unit from the rest of the station.

Taking a reactor apart is a complex job that includes removing, storing or replacing thousands of critical components. OPG’s project partners, skilled tradespeople and nuclear professionals, safely disassemble reactors one at a time.

Putting the reactor back together involves inspecting, cleaning and installing thousands of components to ensure the unit’s safe and efficient operation for at least another 30 years.

Finally, restarting a reactor is a process that involves a number of step-by-step approvals to confirm the quality of work and to ensure that equipment, systems, operating procedures and trained staff are ready to proceed with the start-up process.