Oh, rats! For the third-straight year, Mississauga has been identified as the second-rattiest city in Ontario.

As far as rodent infestations go, Canada’s sixth-largest city plays second fiddle only to Toronto once again according to Orkin Canada, which today released its annual top 25 “Rattiest Cities in Ontario” list.

Based on the number of commercial and residential rodent (rats and mice) treatments it provided from Aug. 1, 2020 through July 31, 2021, Orkin, the country’s largest pest control company, identified Toronto as the “rattiest” city in the province once again.

The biggest jump from last year to this year was made by Ottawa, which was 12th last year, according to Mississauga-based Orkin, which notes that multiple lockdowns this past year due to COVID-19 have meant more people are cooking and eating at home.

“Food abundance means potential increases in rodent populations, which is why people may be seeing more rats and mice in residential neighbourhoods,” Orkin officials said in a release.

Prior to jumping into second spot on the list in 2019, Mississauga recorded back-to-back third-place rankings on the rodent list in 2017 and 2018.

“Mainly nocturnal, increased sightings of rodent activity during the day have become more common, as well as migrations from resource-depleted urban centres to food-rich suburban areas, where rats and mice may have been able to reproduce and drive up the population,” they said. 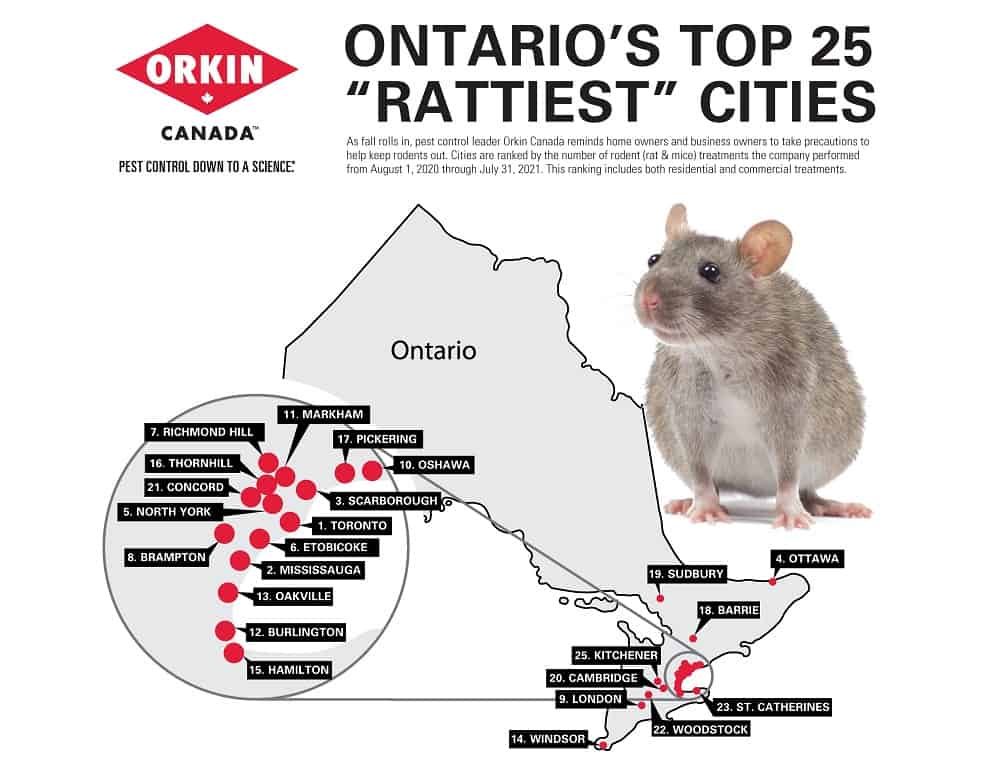 Orkin Canada says with the colder weather approaching, and rodents looking for shelter, there are a number of things people can do to keep rats and mice from entering their homes and property: