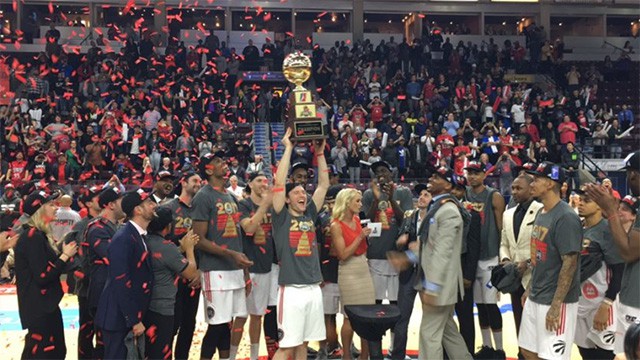 The confetti came down for the Raptors 905 first D-League championship in the team history.

The chips were down in the all deciding Game 3 and the 905 stepped up with a convincing 122-96 win over the the Rio Grande Valley Vipers.

Bruno Caboclo’s career-high double-double of 31 points and 11 rebounds, to lead all scorers, helped seal the deal for the win. But it was rookie Pascal Siakam who was named NBA D-League MVP after dominating both sides of the floor throughout the series. Siakam averaged 18 points, 7.9 rebounds and two steals.

Offense was on full display, as per usual in the D-League. But not from the team you’d expect, which on paper would’ve been the Vipers’ offense as the most dominant in the league.

Mississauga’s Raptors call ups combined for 43 points in the team’s 57-49 lead in the first half. With Caboclo leading the way the 905 later led by a 21 point cushion going into the fourth quarter.

This year has certainly been a Cinderella story for the 905.

Only two seasons have passed since the conception of the team was announced. The 905 started their history as a 23-27 team, good enough for fifth best in the Atlantic Division.

Now they are a champion, with the Central Division title, the D-League Coach of the Year in Jerry Stackhouse (also his first year at the helm), and the best defensive player in Edy Tavares (who was on assignment with the Cleveland Cavaliers) to round out their league-best defense.