Raptors 905 Take Home First Win of the Season in Mississauga 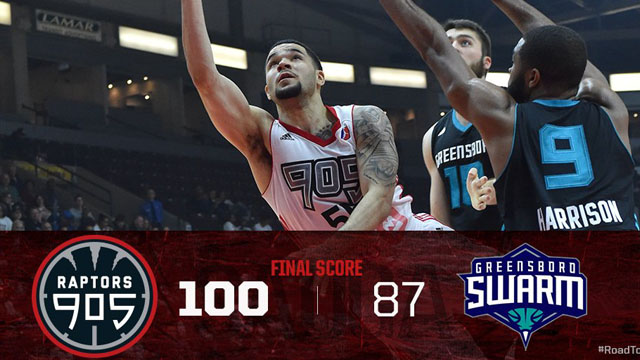 The 905 started their season on a high note with a solid 100-87 win over the newly minted Greensboro Swarm.

The Hershey Centre’s 3,216 fans were treated to a first half where the Raptors 905 never gave up a lead. By the end of the second half, the 905 rallied over the Swarm to a 48-33 lead with guard Fred Van Vleet chipping in a team high of 11 points and five assists in the half.

Despite being outscored, the 905 still held the Swarm on their dramatic comeback effort. Though the final score of 100-87 was nowhere near to a close game, had the Swarm played the entire game like their 56 point second half, it could’ve been a different outcome.

Guards Brady Heslip and Van Vleet put on a clinic with 20 points apiece, all the while Heslip shooting 50 per cent from three point land and Van Vleet leading the team with seven assists and 33 minutes on the floor. Forward E.J. Singler settled in nicely with 11 points on the night and led the team with six boards.

The 905 will be balling at home next on Sunday at 2 p.m. when they host the Long Island Nets.