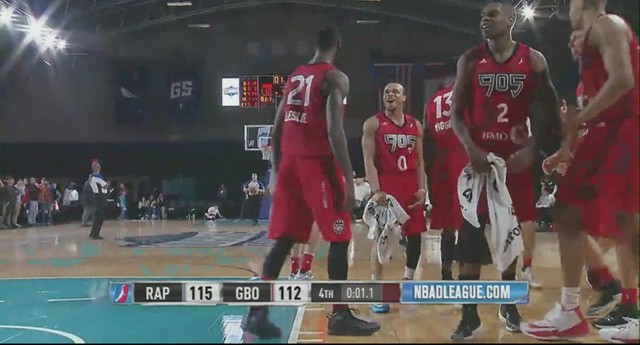 The Raptors 905 were seconds away from snapping their winning streak, but a quick turn-and-shoot 3-pointer off the hands of C.J. Leslie changed the game, and the weekend, for the 905 in Greensboro, N.C.

The visiting 905 went from leading by 22 points to having the Swarm out play them and tie the game in the final minute. It came down to an inbound play with Fred Van Vleet finding Leslie at the top of the arc for the go-ahead game winner with 3.8 seconds left in regulation.

It was game over after that and the 905 left Greensboro unscathed and their win streak intact.

In other news, 905’ers on assignment spent some time on the court with the Raptors in Orlando on Sunday night. Van Vleet ran the court for just under 23 minutes in the 109-79 blowout win and notched four points, four assists and two rebounds. Bruno Caboclo put in four minutes but didn’t have much of an impact. Jakob Poeltl also got the shoulder tap and grabbed two rebounds in five and a half minutes of play.

Van Vleet and Caboclo were reassigned back to the 905 after the win over the Magic.

They will be in familiar territory on Tuesday morning at the Air Canada Centre for a matchup against the Grand Rapids Drive (7-7) at 11 a.m.