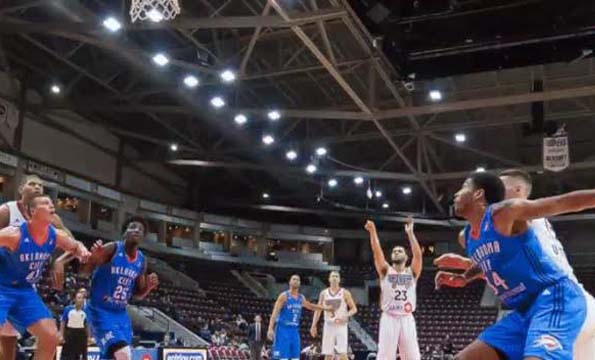 The Raptors 905 (9-2) did not let the snow chill their hot winning streak last night. The 905 outdid the Oklahoma City Blue (8-6) in the second half to rally to a 103-91 win at the Hershey Centre. The win last night tied a franchise record for the most consecutive wins for the 905.

With help from Fred Van Vleet and Bruno Caboclo back on assignment with the 905, Mississauga’s squad went toe-to-toe with the Blue despite a sluggish start. Both squads were tied up in first quarter at 27 points and the 905 narrowly trailed 54-51 at the half.

The challenge for the 905 was containing Blue big man Dakari Johnson, the 7 footer from Kentucky and Player of the Month of November. Mississauga’s pillars of the paint Yanick Moreira, Caboclo and Edy Tavares held Johnson to an ineffective presence, just four points and two offensive rebounds in the half.

Head coach Jerry Stackhouse said the 905’s defence is what won them the war and it certainly showed in Oklahoma City’s lack of offence in the third quarter.

Caboclo made it rain and showed off his shooting touch going 3-for-3 from 3-point range and mustered up 10 points in the quarter. Van Vleet put in nine and a half minutes on the floor and found the hot hands for the 905 to put up 36 points and gobble 19 rebounds in the frame alone, rendering them untouchable by the Blue’s 18 points and six boards.

If it weren’t for the third quarter though, Oklahoma City could have caught up to Mississauga. OKC guard Alex Caruso woke up his squad with eight points and they followed suit with 50 percent shooting from the field. But luckily for the 905 their gap was so large that they held on and sent Oklahoma City packing with their second straight loss on their road trip.

The team was led by 16 points from Moreira, 11 rebounds from C.J. Leslie and 12 assists from Van Vleet.

The 905 will host the Greensboro Swarm at 7 p.m. on Saturday for their third matchup of the season.