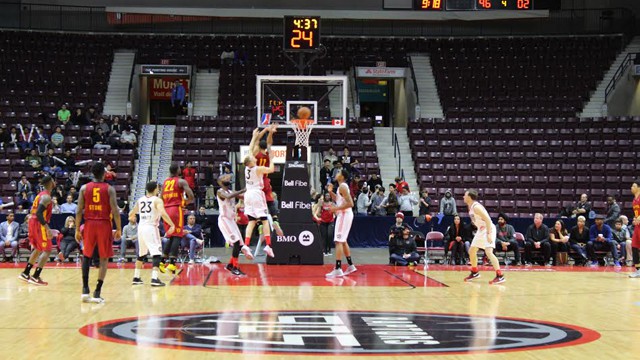 Playing a back-to-back after a thrilling comeback win that gave the Fort Wayne Mad Ants their first loss of the season, the 905 came through again with a 104-72 blowout win over the Charge. The 905 took their first lead two minutes into the game and kept their offense flowing for all four quarters. The squad eventually led by as much as 32 points over Canton.

In his first game of the season, guard Axel Toupane dropped 32 points to lead all scorers and was perfect in 14 trips to the free throw line and shot 67 percent from the field.

After the win the Raps headed east to Maine for a bout with a Red Claws on Sunday.

The Red Claws and 905 had identical 6-2 records going into the game, but it was the 905 that came out of the fight with one in the win column. Their 102-89 win put an abrupt end to Maine’s three game winning streak.

This matchup proved to be more even keeled than their previous game, but the 905 kept up with the Red Claws from the whistle. Mississauga’s “active defense”, that head coach Jerry Stackhouse credited to their big win against Fort Wayne, came up huge to close out the half on a high note. It enabled the hot hand of C.J. Leslie to put up a double-double in 24 minutes which helped to outscore the Red Claws by ten points on the way to a 58-42 lead at the half.

It was game over for Maine after that as the 905 took over the third with a 25 point lead and contained their opponents with tight defence to keep the Red Claws’ deficit in the double-digits.

The 905 have one last stop on their road trip, this time in South Carolina. The Greensboro Swarm will be waiting for the red hot 905 on Dec. 7 for a 7 p.m. tip-off.