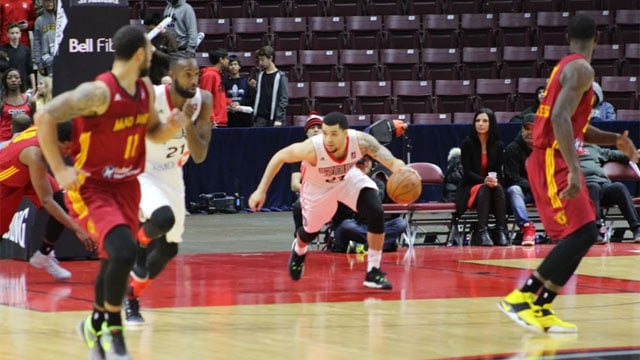 The Raptors 905 dealt the Fort Wayne Mad Ants their first loss of the season; a 109-107 come from behind win where the Mad Ants blew a commanding first half.


The Raptors 905 dealt the Fort Wayne Mad Ants their first loss of the season; a 109-107 come from behind win where the Mad Ants blew a commanding first half. Forward Will Sheehey had a stellar night with a team high of 23 points and five steals. C.J. Leslie’s clutch 10 points to close out the game rounded out his 16 points and seven rebounds of the night.

The 905’s active defence and 11 deflections in the first quarter helped keep the Mad Ants close, but couldn’t hold Trey McKinney-Jones or Travis Leslie down. The Mad Ants duo put up 17 of the team’s 26 point lead and helped set the benchmark of 55.6 per cent shooting from 3-point land. The 905 trailed 26-22 at the buzzer.

The Raps fell way behind 46-36 half way through the second frame. The 905 elevated their defence on McKinney – Jones and Leslie and held the pair to five points to start the quarter. But it left the window open for Christian Watford to score a pair of 3-pointers. Those buckets brought Fort Wayne’s top scorers back to life and they eventually tacked on nine more points. Heslip came off the bench and contributed a pair of three’s but couldn’t ignite the rest of the squad’s shooting. The 905 shot 38.5 per cent from the arc compared to Fort Wayne’s 60 per cent consistency from long range.

The Mad Ants held a comfortable 61-49 lead at the buzzer.

But Fort Wayne wasn’t so comfortable in the second half.

Sheehey put the team on his back and dropped 12 points to cut Fort Wayne’s lead down to 85-81 by the end of the third quarter. Even Bruno Caboclo sparked the offence with eight points in the paint to keep the comeback alive.

The Hershey Centre’s atmosphere was tense in the fourth quarter.

The 905 tied the game up at 90 a piece with eight minutes remaining. C.J. Leslie turned the game around on both ends of the floor with 10 points, tight defence and a blocked shot when the Raps needed it. The 905 led by as much as six points, which was huge considering they were down by 15 in the first half.

Fred Van Vleet had a quiet night but came in clutch when it counted, draining a three at the top of the arc with less than a minute to go. That basket gave the 905 enough insurance to close out the game 109-107.

The 905 hit the road for the next three games starting tomorrow with a match up with the Canton Charge at 7 p.m.