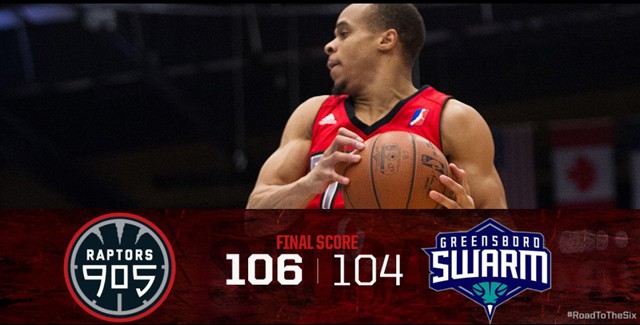 The Raptors 905 rode out their road trip with three straight wins, capped off with a 106-104 nail biter over the Greensboro Swarm last night.

The Raptors 905 rode out their road trip with three straight wins, capped off with a 106-104 nail biter over the Greensboro Swarm last night.

The 905 looked to guards Brady Heslip, Axel Toupane and forward C.J. Leslie for big performances and they came through. Toupane and Heslip each dropped a team high 23 points, with Heslip recording seven assists and a pair of steals and Leslie grabbing seven boards on the night. Bruno Caboclo, Fred Van Vleet, Negus Webster-Chan and Goodluck Okonoboh did not play due to Coach’s Decision.

Greensboro wasn’t to be taken lightly this time around. Compared to their 100-87 loss in the season opener at the Hershey Centre, the Swarm gave the 905 something to sweat about.

Aaron Harrison led the Swarm with 11 points in the first half which kept Greensboro within six in the first quarter, and helped to outscore the 905 by the end of the second frame. But it was the 905 who headed to the locker room with a 49-46 lead.

Heslip shined in the third quarter. The Canadian did his job with 55 per cent shooting from long range with three nailed 3-pointers in addition to leading the team in minutes on the floor. But the Swarm never left the 905’s side and nearly went shot for shot from the field, only giving up a seven point lead by the end of the third quarter.

In any close game such as this one, the fourth quarter was decided by free throws and defence. Greensboro’s Xavier Munford gave the Swarm a six point lead with a 14 point helping with less than three minutes left in the game.

But the active defence that Head Coach Jerry Stackhouse has been raving about sprung into action to close out a tough win.

The 905 turned on the Swarm’s lack of defence and converted it into a nine point run that took back the lead 104-101 with 38 second left. The 905 locked down the Swarm despite giving up a few fouls with the game on the line and eventually took home the win.

The Raps 905 are back at home Friday night to host Sioux Falls for a 7:30 p.m. tip at the Hershey Centre.