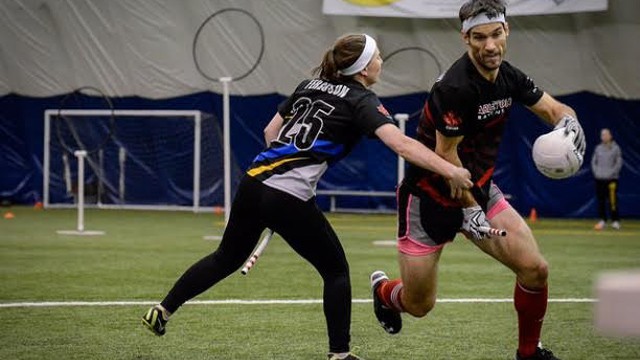 Are you a big Harry Potter fan? If so, you can check out a bona fide quidditch championship in the city this weekend.

Starting tomorrow (Nov. 12), the city will play host to the Quidditch Eastern Regional Championship at the Iceland Fields. The championship will kick off at 7:30 a.m tomorrow morning and run until 8:30 p.m. On Sunday, the games will also begin at 7:30 a.m. (bright and early) and wrap up at 5:30 p.m.

“We’re excited to be bringing our sport to Mississauga this year,” said Sachin Kotecha, Events Director, Quidditch Canada. “Our Eastern Regional Championship is an opportunity to showcase this unique sport with the best teams in Eastern Canada.”

For those who don’t know, quidditch is a fictional (or, well, it was fictional) game that was popular amongst witches and wizards in J.K. Rowling’s sprawling and iconic Harry Potter universe. The game was adapted for real-life use among muggles in 2005.

Basically, real-life quidditch is a face-paced, full contact, hands-on sport that is something of a cross between rugby, basketball, dodgeball and handball. The game is suitable for co-ed participation, so both men and women can play together.

The equipment involved includes six goal hoops, a semi-deflated volleyball, three dodgeballs, one snitch sock and shorts (long sock with a tennis ball in the bottom) and 14 brooms. The game consists of two teams with seven players each on the field at a time. Players take on specific positions, including a seeker, three chasers, two beaters and a keeper. There is also an impartial player who runs with the snitch (the sock with a tennis ball) attached to his or her waistband.

To keep things authentic, all players must have a broom between their legs at all times.

For the first 18 minutes, the keeper must prevent the chasers from putting the quaffle (volleyball) through the hoops. Throughout the game, the two beaters throw bludgers (dodgeballs) at players. When players get hit by a bludger, they must drop any ball they are holding, dismount their broomstick and run and touch a goalpost. The snitch comes out after 18 minutes of play and seekers are tasked with chasing the snitch runner. Once a seeker has caught the snitch, they must hold it for at least three seconds. Once the snitch is caught, the game is over. Catching the snitch awards a team 30 points, while each goal scored is worth ten points.

“We are pleased to host the Quidditch Eastern Regional Championship in Mississauga and expose the community to this new and unique sport,” said Shari Lichterman, Director of Recreation at the City of Mississauga. “We have a history of hosting successful national and regional sporting events. Our goal is to attract tournaments and major sporting events like the Quidditch Eastern Regional Championships that showcase Mississauga as a sport destination and draw a large number of spectators.”