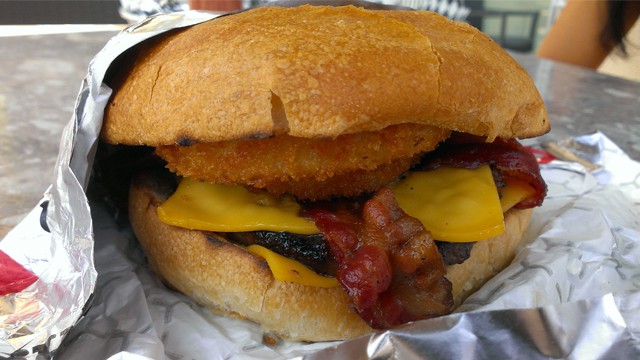 Where?
Located at the new Limelight condo buildings (the condos with the green lights on the roof) at the City Centre is the brand new Union Burger. Union Burger was established in 2010 and has 12 locations in Canada and Mississauga is the newest location. They have a really nice patio for a burger joint that overlooks Sheridan Collage, and if I had to take a guess houses the bulk of their customers. This is where I had lunch today.

What?
All American – Two Beef Patties, American Cheese, Smoked Bacon and Onion Rings with a side of Onion Rings and a Coke

Time:
It took about 8 mins but it wasn’t busy

The Verdict:
I am a self admitted burger connoisseur, so I may be tough on Union especially since the GTA has so much competition in bringing the beef. There is no comparison to The Burger’s Priest or Holy Chucks, but this joint will fill a void if you’re looking for a decent burger. If you like Five Guys or Hero Burger, this place is on that level. I do have to admit that the burgers and the menu are very well priced. A similar combo would have cost me $15 plus at Five Guys. Would I go back?  Yes, because I love burgers, I live nearby and what choices do we really have at the City Centre? It’s slim pickings.

I have to bring up the idiotic drink machine they have called the Coca Cola Freestyle machine. It’s a machine with a touch screen that allows users to select from mixtures of flavors of Coca-Cola branded products which are then individually dispensed. Here is what’s wrong with it: 1) there is only one dispenser, and as I mentioned before it wasn’t busy, yet it still took me about 5 minutes to get my drink because the dude in front of me was trying a new mixture and 2) the screen was nasty and sticky from the compiled stickiness of pop laced fingers from all the other people that touched the screen before me. It’s like touching someone else’s touch screen phone just before you eat. Gross!