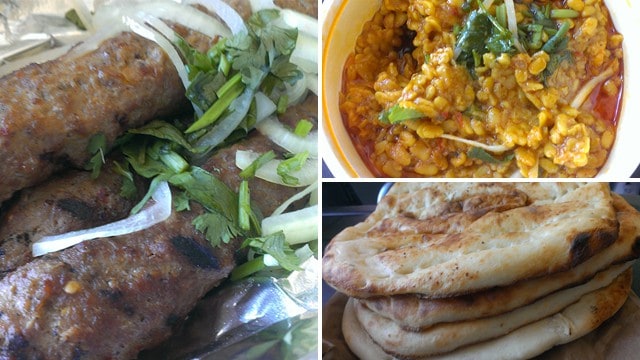 The Verdict: Pakistani-Indian cuisine is an exotic change from a Subway sub lunch, my easy go to lunch bite, but it’s definitely not an everyday lunch choice for me because of the spicy kick.

The Good: Flavour, flavour, and more flavour with a shot of heat! In a nut shell, the Seekh Kabab is seasoned meat on a stick, and it comes with two sticks.  It was juicy and had enormous flavour. The Daal Mash (pulses of dried lentils, chickpeas and/or beans) had an f’n kick to it and it made my head, nose and upper lip sweat, along with opening up my nasal passages. The Naan bread was warm and soft. My lunch buddy and I made a wrap that enveloped all of the dishes we orderd –  Seekh Kabab and the Daal Mash wrapped with the naan – a Seekh Kabab Wrap. This invention should be the next great food truck to hit the streets!

The Bad: There are only 2 locations in Mississauga at Dixie south of Rathburn and the other in Meadowvale off of Winston Churchill.  The Dixie location is just a take out spot, so expect to eat it in your car or take it back to work. The website designer obviously doesn’t know Mississauga, for one, Mississauga and Meadowvale are labelled on the site as different locations (when in fact Meadowvale is in Mississauga), and two, Mississauga is spelled incorrectly as Mississuaga. It’s Sauga yo! (said like Pinkman from Breaking Bad)

Where?
Located in a plaza on the corner of Dixie and Burnhamthorpe is a Pakistani/Indian joint called Karachi Kitchen.

Length of Time to Receive Meal: 10 minutes during the lunch