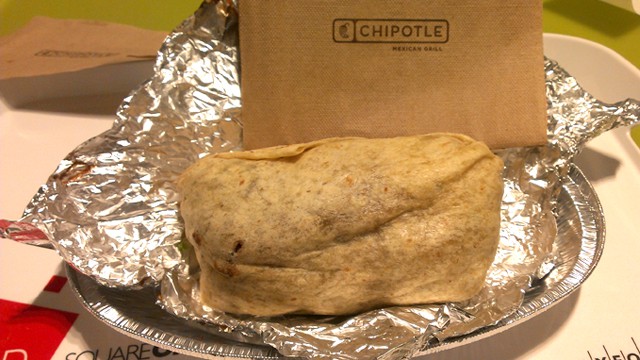 The Verdict: When I try something new I will naturally compare it to the best that I’ve had in that category and with burrito’s I had to compare it to Burrito Boyz. Is it as good as Burrito Boyz? No, but it’s still a damn good burrito.

The Good: Over all, the burrito tasted really good. I didn’t think much when I saw the ingredients piled up in buckets prior to creating the burrito but after I took my first bite it didn’t matter. My burrito included grilled chicken, brown rice, black beans, salsa, cheese, sour cream and a touch of hot sauce. This combo worked perfectly and my burrito was stuffed and looked like it was about to explode, which is not a bad thing.

The Bad: Guacamole costs a whopping $2.00 extra, on a burrito, are you shitting me? And no debit payment service – are you shitting me again? It isn’t because it just wasn’t set up yet (I asked). They aren’t planning to have it. Cash and credit card only.

Where?
Here I am again at Food Central food court at Square One and I’m here to try the last of the new food court additions called Chipotle Mexican Grill. I must say that I am pretty excited about all the new selections at the new food court because for about a decade this food court was looking like the food court found at Dixie Mall. Chipotle believes in using ingredients that are raised responsibly, some of which include the use of local ingredients, meats without the use of subtherapeutic antibiotics or added hormones, pasture based dairy, and non-GMO alternatives. At the end of the day, let’s see how it’s going to taste.

Length of Time to Receive Meal:
3 minutes during the lunch rush