Pulled over heavy tow truck in Oakville put ‘out of commission’, driver and company charged 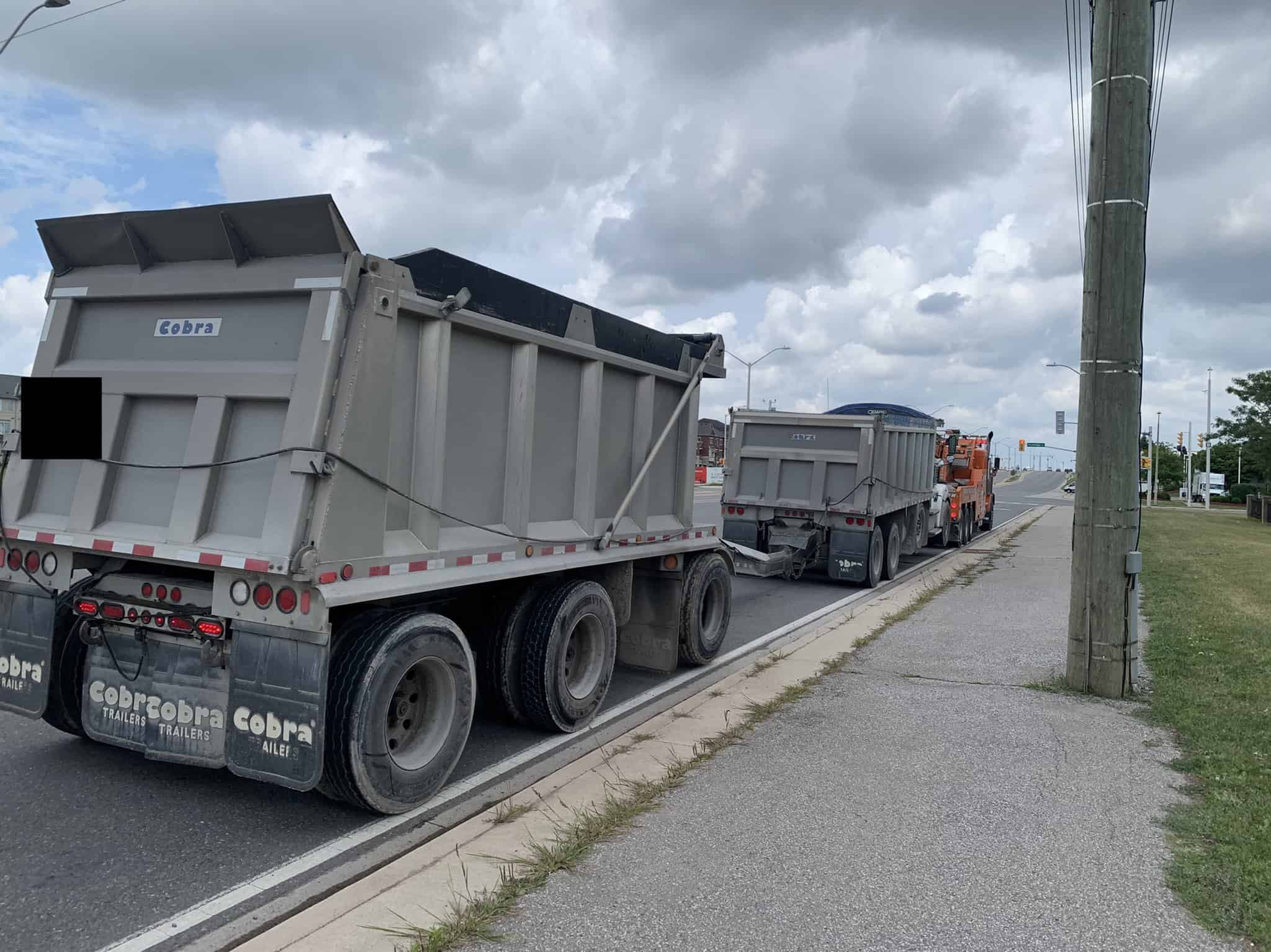 Police pulled over a heavy tow truck and the dump truck and trailer it was pulling in Oakville on Monday afternoon and discovered numerous safety hazards upon closer inspection. HRPS PHOTOS

A driver of a “heavy” tow truck and the company he works for are facing several charges after he was pulled over by police in Oakville and an inspection revealed numerous safety hazards.

Halton Regional Police Cst. Marc Taraso pulled over the truck late Monday afternoon, which was towing a dump truck and its trailer down Dundas St.

Cst. Taraso discovered the total length of the haul was 35.5 metres, surpassing the permitted combination length of 23m without a special permit.

“No special permits in force,” Cst. Taraso said in a tweet.

Upon closer inspection, he observed “numerous leaks” during the stop and brought the vehicle in to be inspected by the Commercial Vehicle Safety Alliance (CVSA).

In order to tow both vehicles, Cst. Taraso explained the CVSA removed the axle shafts from the dump trucks’ drive axles which were still down on the ground being towed and plugged with wood.

This, he said, was causing the hubs to leak all over the road and make the axle shafts insecure on the trailer frame.

“Hydraulic fluid (was) leaking actively and steadily from a saddle tank onto the roadway,” Cst. Taraso said of the insecure load. “What would happen if a motorcycle locked up the brakes on that oil patch?”

In order to tow both vehicles, they removed the axle shafts from the dump trucks drive axles which were still down on the ground being towed and plugged with wood. However this was causing the hubs to leak all over the road (and axle shafts insecure on the trailer A Frame). pic.twitter.com/9Q0qxvRTHC

The inspection also revealed numerous insecure chains and gravel on the rear of the truck bed and there was a chaffed brake air line on the tow truck.

As well, he said no air was being fed to the dump truck at all.

“Which means no brakes at all on the dump truck/trailer,” Cst. Taraso tweeted. “Sixteen wheels down on the ground and only eight (50 per cent) of brakes available.”

There was also excessive vertical play on the driveshaft of the tow track with only hand pressure.

Cst. Taraso says the dump truck/trailer combination has been placed out of commission and the driver and the company have been “charged accordingly.”