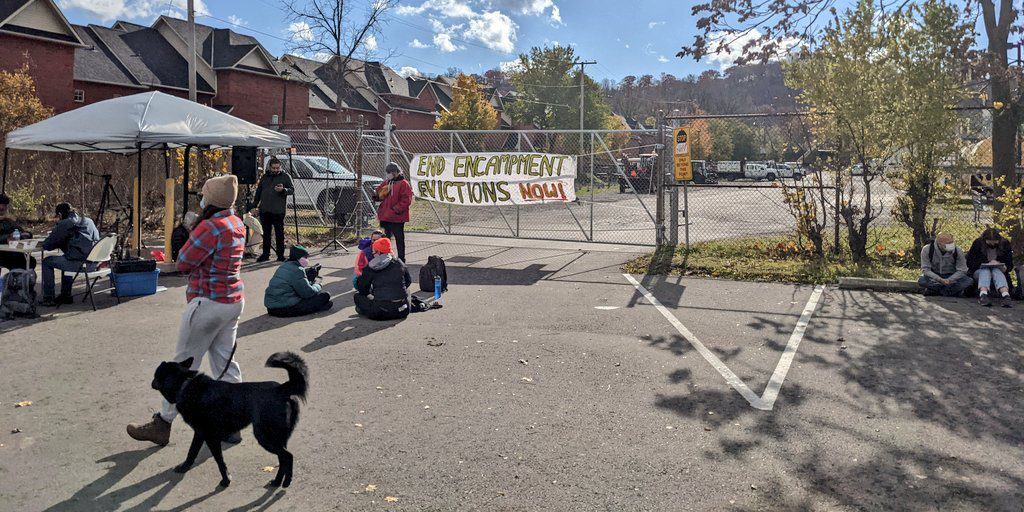 Members of the Hamilton Encampment Support Network set up outside 161 Studholme Rd — off of Aberdeen near Chedoke. They're demanding an end to the encampment evictions. (Photo credit @14forProgress on Twitter)

Dozen of individuals blocked the entrance to a City of Hamilton Public Works facility Friday (Nov. 12) in protest over the eviction of encampments on city property.

Members of the Hamilton Encampment Support Network set up outside 161 Studholme Rd — off of Aberdeen near Chedoke, and said they would remain there “all day.” They’re demanding an end to the encampment evictions.

The City says “approximately 30 staff and about 10 vehicles” were prevented from attending work-sites due to the protest. Staff at the Studholme building work mostly in the city’s Parks department, as well as Energy, Fleet & Facilities and golf. Some of the staff were scheduled to install the Christmas tree in Dundas on Friday, according to the City.

“WE WON!” tweeted Hamilton Encampment Support Network at around 2:30 p.m. “Thanks to everyone that joined us for our first labour stoppage picket, we shut down City facilities today responsible for carrying out encampment evictions for the day. Thank you to everyone today – we will continue to show up in numbers and keep up the fight.”

WE WON! Thanks to everyone that joined us for our first labour stoppage picket, we shut down City facilities today responsible for carrying out encampment evictions for the day. Thank you to everyone today – we will continue to show up in numbers and keep up the fight.#HamOnt pic.twitter.com/8sJ8GK3Ifm

A statement was issued by Michelle Shantz, the City Manager’s senior communications officer.

“The City respects people’s right to peacefully protest, but must also ensure the safety and respectful treatment of city staff in their workplace,” Shantz said. “The majority of staff at the location were sent home. The remaining staff were redeployed to other work and work locations today.

The clearing of encampments from city property was permitted after a Superior Court ruling on Nov. 2. An attempt by the Hamilton Community Legal Clinic (HCLC) to get an interim court injunction preventing the city from tearing down the tents failed.

Encampments and a lack of affordable, rent-geared-to-income housing have been a hot issue among residents, members of city council, social activists, and unhoused people throughout the COVID-19 pandemic.

The city maintains that it will not ticket individuals who are unsheltered unless they ignore what the city deems as “appropriate alternative options.” Then a trespass notice will be issued — placing the enforcement responsibility on the shoulders of the Hamilton Police Services.

To date, 12 individuals and couples accepted the shelter spaces that were offered, according to the City.

“At times, individuals may decline an offer of shelter initially or not arrive at the shelter for different reasons,” said Shantz. “Outreach staff remain engaged with these individuals and continue their outreach activities and offers of support with shelter, referral to community supports, and developing housing plans.”

She added, “An encampment site is only scheduled to be cleared once everyone at that location has been assessed, once everyone has been offered safe and appropriate indoor space, when available; and notice has been provided to give people time and help to collect personal belongings.”

City staff says it is planning to bring a report to the Dec. 7 Emergency & Community Services Committee that will provide more details about the planned transformation of the shelter system, capacity, and winter plans.