Thunderstorms, temperatures up to 25 degrees Celsius expected this week in Mississauga and Brampton
Playhouses, water bottles and more recalled from Mississauga and Brampton stores due to safety
Male stabbed in Oshawa, taken to trauma centre
VIDEO: Geese causing major traffic jam at intersection in Brampton by Costco
Restaurants push to keep delivery app caps as they try to recover from pandemic

Mississauga is home to numerous communities from a variety of countries, and a number of them have either gone through the process of becoming a Canadian citizen or are currently taking the steps to become one. Whatever the case may be, you know that once you pass all the tests you are required to take a citizenship oath in a nice ceremony along with your fellow new Canadians.

This is the current Oath of Citizenship from the Government of Canada's website:

I swear (or affirm) that I will be faithful and bear true allegiance to Her Majesty Queen Elizabeth the Second Queen of Canada. Her Heirs and Successors, and that I will faithfully observe the laws of Canada and fulfil my duties as a Canadian citizen.

But we live in the year 2017, where there has been a renewed focus on the relationship of Canada with the Indigenous population. Recently, the Truth and Reconciliation Commission (TRC), which examined the legacy of the residential school system, issued over 90 recommendations on how the federal government should begin addressing reconciliation of the relationship with Indigenous peoples.

One of them was to revamp that citizenship oath to contain recognition of that reconciliation of that relationship. A draft version was obtained by the political website iPolitics.ca which was posted to social media, which reads: 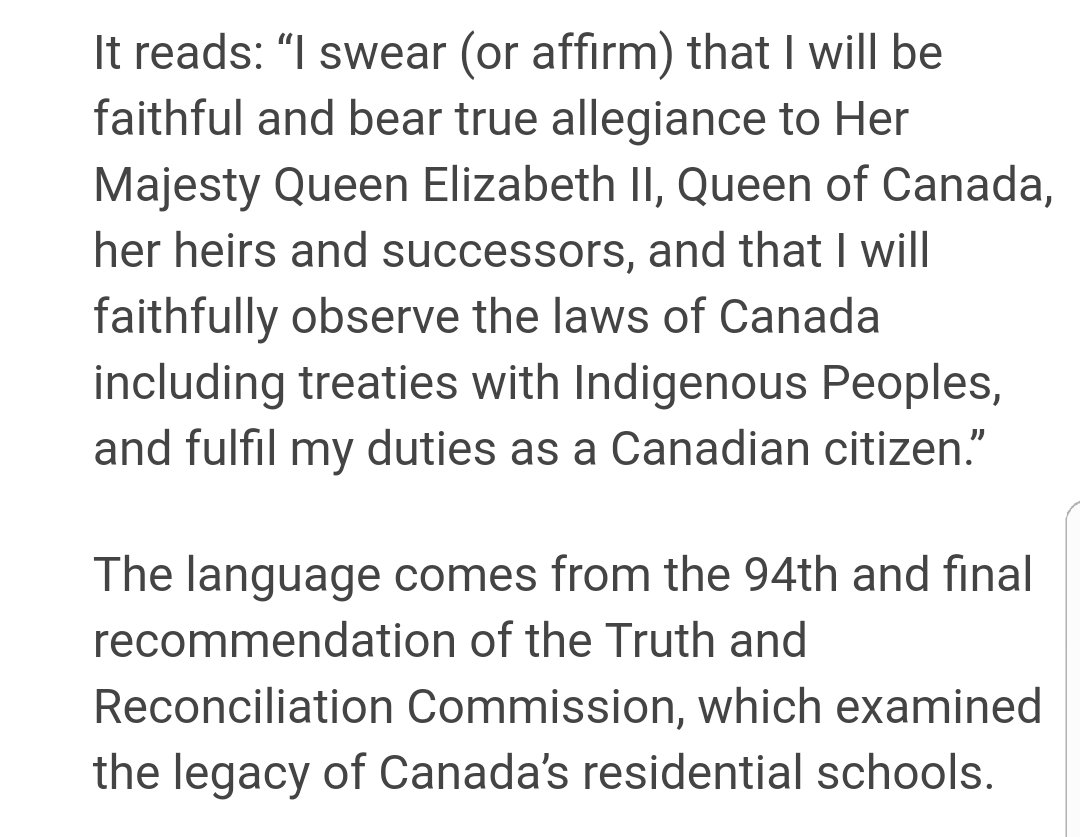 The changes are part of the Ministry of Immigration's portfolio dating back to 2015, when the commission delivered its recommendations. Implementing that recommendation was one of the tasks given to Immigration Minister Ahmed Hussen when he was sworn into his portfolio in January 2017, briefing notes for the minister suggest.

The notes, obtained by The Canadian Press under the Access to Information Act, show the government also wants to modify the script delivered by those who preside over citizenship ceremonies. The proposed notes say the script should refer to ceremonies taking place on traditional territories, and include remarks on the history of Indigenous Peoples. However, it should be noted that these are only proposed changes at this time.

You may have noticed that the last few years have seen a trend by the political class in this country to acknowledge the relationship Canada has with Indigenous peoples. One such example is how politicians at all levels of government before they begin a public speech at any event acknowledge they are on the traditional lands of the (insert name of indigenous group here).

A helpful guide from the Canadian Association of University Teachers outlines how to properly acknowledge indigenous groups based on geographic territories. Now, there is nothing wrong with educating aspiring Canadian citizens about the history of the troubled relations between Canada and her indigenous population. It is actually an important part of Canadian history that new citizens should be required to know and understand.

The concern is that the learning may be only superficial in terms of acknowledging that there is this relationship. As a new citizen to this country, would you not be wondering just exactly what 'respecting treaties with Indigenous peoples' actually means? Are there certain things of a legal nature you have to aware of when out and about in society?

The Liberals committed some political overreach on themselves, in all honesty. Justin Trudeau, when he was still campaigning during the federal election, promised to implement every single one of the 90 plus recommendations from the TRC, and since taking office his government has bent over backwards to accommodate and respect the federal government's relationship with Indigenous peoples, not always with success.

In the end, this modernization of the citizenship oath may provide a bridge towards educating people about the Indigenous relationship in Canada. But I'm concerned that it may open the doors to overreach not just from politicians but from others. What would happen should militant Indigenous activists barricade themselves on public lands over a land claim that many new Canadians may not even be aware of? Would they have to 'respect the treaties with Indigenous peoples' then? Or is the new citizenship oath wording just additional political lip service from the Liberal government?

It will be interesting to see the final draft of the revised citizenship oath for new Canadian citizens.

Popular fried chicken joint planning to open new location in Mississauga
If you love chicken and waffles, you might be excited to hear that a popular chain with locations in Toronto is heading to Mississauga in the not-too-distant future.
END_OF_DOCUMENT_TOKEN_TO_BE_REPLACED