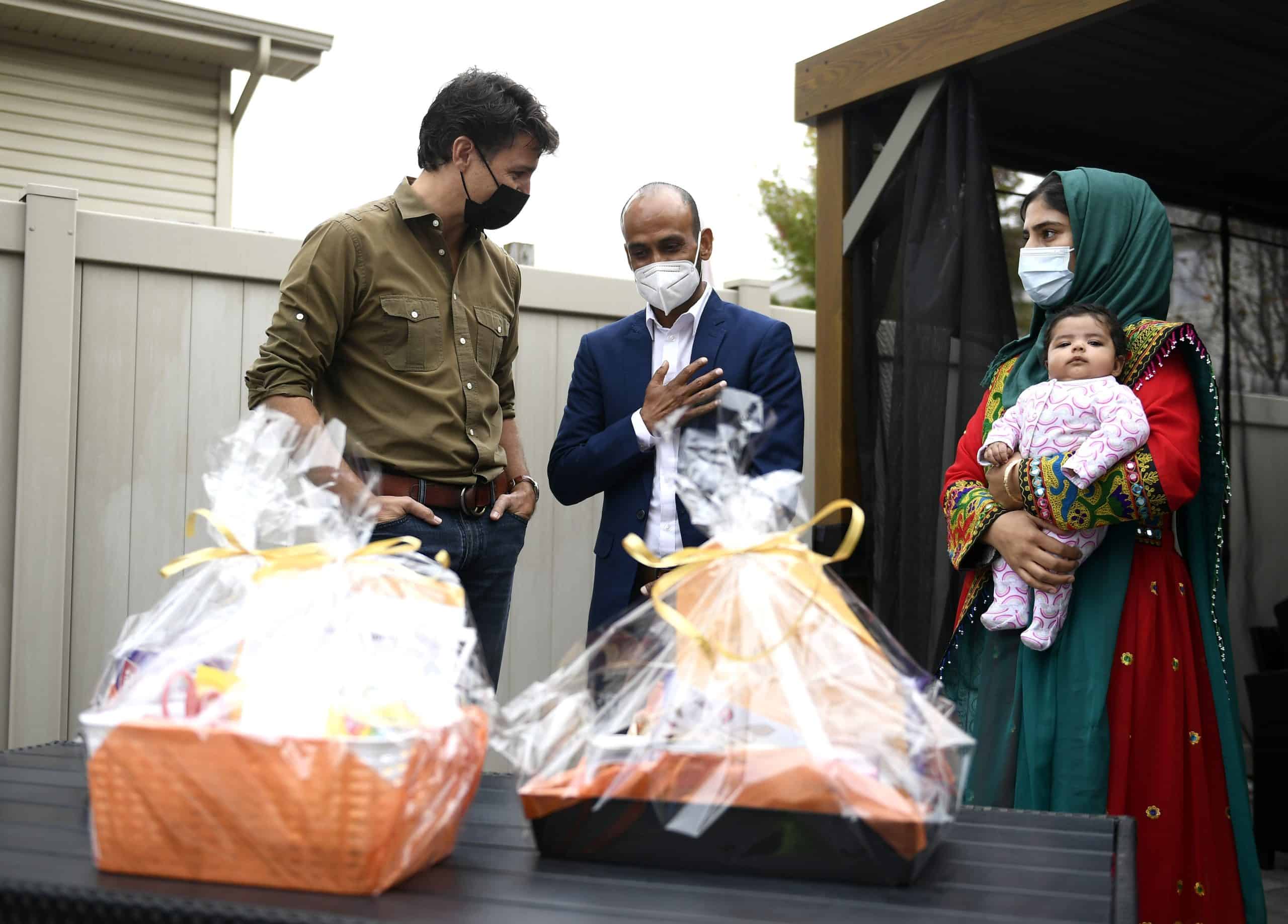 Prime Minister Justin Trudeau speaks with Obaidullah Rahimi, right, his wife Arezoo, and daughter Hawa, 2 months, after assembling care packages for the recently resettled Afghan family for Thanksgiving in Ottawa, on Saturday, Oct. 9, 2021. Obaidullah Rahimi worked at the Canadian Embassy in Afghanistan; his family is one of 22 resettled Afghan families in the Ottawa area. THE CANADIAN PRESS/Justin Tang

Prime Minister Justin Trudeau met a family of newly settled Afghan refugees on Saturday, marking the start of the Thanksgiving weekend with what he said was an important reminder.

Trudeau met Obaidullah Rahimi, who began working at the Canadian Embassy in Kabul in 2008 and was hired full-time last year, at an Ottawa home where volunteers prepared gift baskets to give to resettled Afghan families.

“This is what Thanksgiving is all about, reflecting on how lucky we are,” Trudeau said.

Rahimi came to Canada with his wife, three-year-old daughter and a baby who is now a month-and-a-half old as Afghanistan fell to the Taliban this year.

Rahimi said he loved working at the Canadian Embassy, and found Canadians to be friendly.

More than 1,000 refugees from Afghanistan have arrived in Canada since the Taliban took over their home country in the summer.

The government has committed to resettling 40,000 people from Afghanistan.

Trudeau said Canadians are happy that Rahimi and his family are safe.

“We’re happy to bring you here for the next phase of your life,” Trudeau said.

“It’s an important thing to be there for so many of your countrymen who’ve suffered and who’ve faced a setback now with the Taliban — a terrible thing, but we will continue to work together towards a better future.”

For an Afghan family in Calgary, there is much to be thankful for, even if they’re not used to celebrating the holiday.

Azatullah said his family of 13 moved into a permanent home on Friday after staying in temporary accommodation since arriving in Canada a month-and-a-half ago. He asked that his last name not be used because he has family members still in Afghanistan.

“We appreciate the Government of Canada, that they helped us in a very difficult time,” he said in an interview Saturday. He also appreciates local organizations and people who helped his family find housing and provided information about life in Canada.

His family came to Canada because his late brother worked at the Canadian Embassy, he said. Accompanying Azatullah to Canada were his mother, sister-in-law and the children of his siblings.

He’s worried about his two brothers, a sister and a sister-in-law still in Afghanistan and hopes to bring them to Canada as well. Three of the nephews who accompanied him to Canada came without their mother, he said.

Still, he’s hopeful for his future in Canada and while it is a quiet Thanksgiving this time, he said he plans on celebrating the holiday next year.