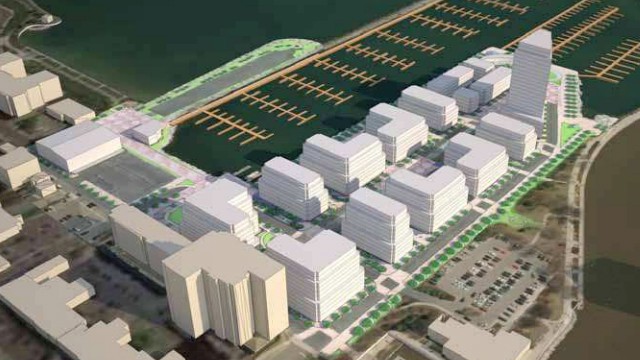 City councillors on Monday were presented with a master plan to revitalize one of Mississauga’s greatest assets: Its waterfront.

The plan, called Inspiration Port Credit, aims to redevelop the waterfront with a focus on the 1 Port Street East site, according to the Mississauga News.

The main concern is how much the redevelopment will cost and who will pay for what.

“This will be the most preeminent lakefront community in Canada, maybe North America,” said mayor Crombie, who is embracing the project. “We’re going to get this right.”

The area of land that will be redeveloped is owned by Canada Lands Company (CLC). According to Ruth Marland, project lead for Inspiration Port Credit, the CLC and/or developers of 1 Port Street East are expected to foot most of the bill.

“There are lots of things we need to work out. Who pays for what is absolutely one of them,” said Coun. Jim Tovey. “We’re all committed to getting it right. We’re committed to the economic and financial sustainability of it, as well as the architectural excellence and access the public will finally have to this site.” Coun. Nando Iannicca said the waterfront redevelopment should be the city’s number one priority, with the Hurontario-LRT transporting people to the Port Credit GO station on a daily basis.

“If we had lots of money and no poverty, I’d be right up there with you,” said Coun. Carolyn Parrish. “I just think our city is getting to a point where we have trouble with housing and we have to work on that.”

The master plan includes a variety of housing types, with units between 50 and 80 square metres.

A full list of features planned by Inspiration Port Credit is as follows:

–          Many opportunities for active transportation

Financial agreements between the city and the CLC are predicted to be in place by Q3 2016.