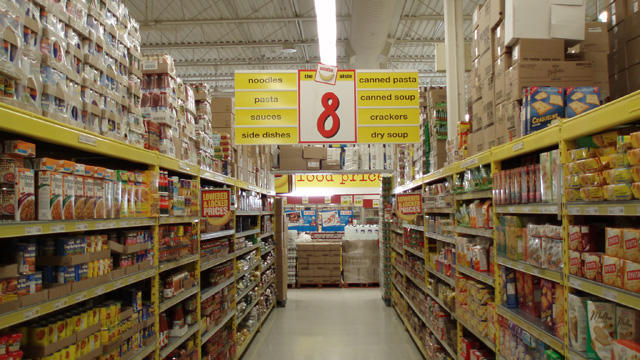 Despite objections from concerned members of the Port Credit community, Linda’s No Frills on Lakeshore closed down on December 24.

The closure certainly wasn’t unexpected because a new development is planned for the area (and has been in the works for some time), but it was disappointing for residents who shop there and, especially, store employees who had to job hunt during the holiday season.

But while the closure is troubling for many residents, it does appear that a nearby No Frills location has provided a solution.

According to a recent post on the Lakeview and Port Credit Facebook page, a sign has recently been posted near the now-defunct No Frills location that reads:

You can see it on the photo below, courtesy of the Lakeview and Port Credit Facebook page. Insauga.com reached out to No Frills to confirm the time and pick-up location, but the company representative said that they are not aware of the shuttle service from the closed Linda’s No Frills to Jerry’s New Frills (located at 680 Silver Creek Blvd.) at this time.

That said, they did mention–and this might be a useful tidbit for anyone with Toronto relatives (or who grocery shops on the way east end from time to time)–that Vi’s No Frills (located at 1435 King Street West) is temporarily closed and shuttling customers to the Peter’s No Frills (222 Lansdowne Ave.). That shuttle runs every 15 minutes from 8 a.m. to 8 p.m.

There are currently unconfirmed reports that the Mississauga shuttle service received very few customers its first day, but the project does appear to be in its infancy.

As for what will eventually replace the No Frills, the city approved a Centre City Capital Ltd. residential and commercial project for the area back in 2012. According to this City of Mississauga Corporate Report, the proposed development will see the area that once housed the No Frills transformed to include a four-storey building with both commercial and office space and a 10-storey condominium.

While some people assumed the No Frills was closing in preparation for imminent construction, that doesn’t appear to be the case.

“This is a decision by [the Loblaws company],” says Wayne Petryk, controller with Centre City Capital Ltd. “We do have plans for future development, but nothing is imminent.”

According to Petryk, the developers have not yet set a date to break ground on the project, so the closure was not spurred by any deadline set forth by Centre City Capital.

While that news might not comfort people who will miss having an affordable grocery store within walking distance from home, there is a silver lining (beyond the brand new shuttle service).

According to Petryk, provisions have been made to allow for construction of a grocery store within the new development.

“The provisions are there if the market conditions are right,” he says, adding that it’s too early to give any specifics on what supermarket might be included.

In the meantime, residents who want to continue to shop at No Frills can grab the shuttle in the Linda’s No Frills parking lot at the aforementioned times.

Other nearby No Frills locations include the Silver Creek store, the 3730 Lakeshore Blvd. West location and the 1250 South Service Road store.