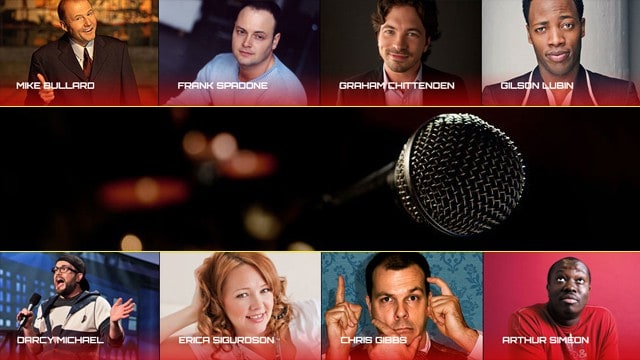 Last year, the Port Credit Comedy Festival debuted in an ironically appropriate (inappropriate?) godly venue (a church) and people responded remarkably well. So well, in fact, that the same festival will be coming back to the First United Church Port Credit on Feb 27 and running (in several different venues) until March 1.

This year’s festival, which will take place in the aforementioned church, Clarke Memorial Hall and the Royal Canadian Legion Branch 82, will feature a variety of comic talents. The powerhouse lineup includes comedian and former talk show host Mike Bullard, Just for Laughs comedian Frank Spadone, Spun Out star Darcy Michael, The Debaters’ Erica Sigurdson and more.  In fact, you can check out the entire line-up on the festival’s refreshingly informative website.

So, why has the festival — still in its infancy — come back for round two?

“[Last year’s festival] did go well,” says the festival executive producer Phil LeConte, who also produces the longer-running sister festival the Kitchener – Waterloo Comedy Festival. “A first annual anything takes building and growing and we’re sticking to the same formula while adding little things here and there. The comics and sponsors we’re happy and it was a great event in my books.”

Last year’s inaugural festival, which featured such comics as Debra DiGiovanni and Steve Patterson, managed to pull around 1,000 attendees. This year, LeConte hopes to bring in that many people or more and is optimistic he’ll continue to pack the intimate, semi-urban venues with comedy fans.

“I think we’ve earned viewers trust, and that was what last year was all about,” he says.

As for breathing new life into an already very new concept, LeConte is introducing VIP passes ($90 per person) that give attendees access to a pre-show launch party with a meet and greet with the gala (opening night) comics. VIP pass holders will also get preferred seating at the gala. The gala will also be the place to be if you’re a fan of Mike Bullard, as it’ll be your only opportunity to see the former TV personality host and perform.

While stand-up comedy is almost always fun, it can be a challenge to meet the expectations of an audience who might have limited experience with live routines. For many in Port Credit (and perhaps in Mississauga in general), opportunities to watch local stand-up are limited. It can also be challenging to entertain a diverse audience who might find distinctly urban, left-of-center routines unusual or, at worst, abrasive. So how does LeConte find comics and routines that suit almost everyone?

“The hardest part of being a producer is finding the comics people want, but people who are new to stand-up tend to enjoy everyman comedy and the comics that talk about everyday stuff that people can relate to.”

When working with a newer and more mature audience (LeConte says the typical Kitchener/Waterloo viewer is more likely to be university/college-aged, whereas Port Credit’s demographic skews older), LeConte refrains from pushing the envelope right away. If people respond best to observational comedy (the universally-appealing humour that made Seinfeld so popular), he sticks to that before slowly introducing more colourful comics.

“It takes time to work up to the bizarre. Once we build [more of] an audience, we can take a chance on more bizarre or weird comics,” he says.

But as far as first impressions ago, last year’s festival only merited one content complaint and garnered much praise.

“We try to supply something for everyone,” says LeConte.

That said, LeConte knows that not every routine is for everyone and says as much when people ask if certain routines will appeal to them.

“We go out of our way to say the shows are not censored and are for a mature audience. I often get people who email me and ask me to recommend something and I always say that comedy is personal.”

That said, LeConte still does his best to tailor his show to his audience.

“I watch the audience and what makes them laugh and clap and groan. Last year I had a great cross-section [of comics] and besides one complaint, I only heard great things.”

This year (much like last year), the event is being put on in conjunction with the Port Credit Business Improvement Area (BIA) organization.

“My goal is to help BIAs and revive downtowns and bring local people to centers they haven’t been to in the past.”

Fortunately for LeConte (and the BIA), Port Credit and general Mississauga businesses are on board with a unique festival that brings people to the neighbourhood and drives traffic to local hotels, shops and restaurants. In fact, Lake Affect will be throwing an after party and The Shore Grill and Grotto will be offering ticket holders a $30 prix fixe dinner special before each show.

For more information on times, locations, comics and prices, visit the festival’s website.